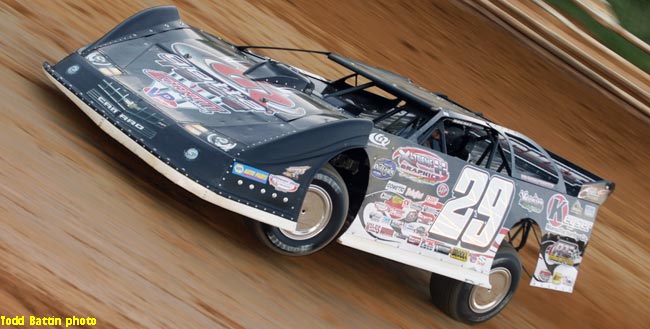 Almost exactly one year later, on Tuesday night (July 30) the 43-year-old star from Union, Ky., will return to the Wisconsin track hoping to recapture the magic formula that propelled him to one of the most convincing victories of his spectacular 2012 championship season.

The WoO LMS will make its fourth annual appearance at the fairgrounds facility 45 minutes outside of Green Bay on Tuesday evening, contesting a 50-lap A-Main paying $10,000 to win as part of a five-race, four-track Midwest swing.

“We were definitely on a roll when we won (at Shawano) last year,” said Lanigan, whose ’12 triumph at the half-mile oval not only was his record-setting sixth in a row on the circuit but also made him the national tour’s alltime winningest driver (a distinction he still holds). “We haven’t been able to get on a streak like that yet this year, but maybe going back there can get us going.”

Lanigan was in the midst of a surge for the ages when he captured last year’s WoO LMS 50-lapper at Shawano. His six straight series victories – a sizzling July/August stretch that also included a $50,000-plus score just three days earlier in the USA Nationals at Cedar Lake Speedway in New Richmond, Wis. – bettered the tour’s existing consecutive-win record of four, and he pushed his overall 2012 win total to 13 en route to a single-season record 15 triumphs.

The veteran driver went on to win the 2012 WoO LMS title – the second of his career – by a record margin of 228 points and end the season with earnings of $426,700 (including the $100,000 championship prize). It was undoubtedly the most dominant campaign in WoO LMS history – a campaign so great, so sparkling, that duplicating it would prove to be an almost impossible task.

Indeed, Lanigan has been human this season. While he enters Shawano’s action tied with Josh Richards of Shinnston, W.Va., for the most A-Main wins this year and with an impressive spring streak of seven consecutive top-three finishes to his credit (his longest such streak in ’12 was six), he sits third in the points standings (last year he led the points battle from start-to-finish) and his statistical numbers are lagging slightly from ’12.

In addition, after finishing outside the top 10 just three times in 40 A-Mains last year, Lanigan already has seven finishes of 13th or worse this season, including a dismal 19th-place run in Saturday night’s 100-lap Prairie Dirt Classic at Fairbury (Ill.) American Legion Speedway that dropped him from second to third in the points standings. Two of his outings outside the top 10 this year came during the tour’s season-opening eight-race swing through Georgia and Florida in February, making him a chaser in the battle for the World of Outlaws crown.

“We got so far behind in points in Florida and we’ve been trying to catch up ever since,” said Lanigan, who has fallen as many as 86 points behind the WoO LMS championship leader this season. “It’s hard to dig yourself out when you get in a hole down there. We’ve been inching out way back into it, but it’s tough to make up that much ground. We don’t have any margin for error.”

The return of Richards as a WoO LMS regular this season and improved performance by, most notably, Shane Clanton of Zebulon, Ga. (four wins, 18 top-five and 28 top-10 finishes through 30 races), Rick Eckert of York, Pa. (one win, 13 top-fives, 25 top-10s), and Tim McCreadie of Watertown, N.Y. (four wins, 12 top-fives, 19 top-10s) has certainly made life on the road tougher for Lanigan. But he attributes his current position in the points standings more to his own inability to avoid off-nights than to increased competition.

“We’ve struggled in more races than we did last year,” said Lanigan, whose four runner-up finishes this season have come in races won by Clanton, McCreadie, Eckert and rookie Eric Wells of Hazard, Ky. “We’ve been pretty consistent since we brought out new (Rocket) cars and a new program about a month ago, but we’ve still missed (the setup) a few nights.”

Lanigan felt his self-owned team was heating up to his liking during the WoO LMS Wild West Tour earlier this month, but a break in the tour schedule and his subpar run Saturday night at Fairbury at least temporarily dulled his momentum. He hopes to get back in the groove when he hits the clay at Shawano, where he’s won a WoO LMS A-Main in each of the past two years.

“We were in a pretty good rhythm when we went out west,” said Lanigan, who registered one win, one second and two thirds during the four-race Wild West Tour from July 5-11. “I would have rather not taken a couple weeks off after that trip so we could keep it going, but we’ll see if we can pick it back up.

“I think we’ll have something good for Shawano. That’s a place where you know you can go and be able to race. I’ve always liked bigger tracks like that and we’ve run real good there the last two years, so I’m looking forward to going back there. Hopefully we can start a week in Wisconsin off with a win there and then go on to Cedar Lake (for the USA Nationals Aug. 1-3) and try to win that one again.”

Shawano’s Tues., July 29, program, which also includes action for the IMCA Stock Cars, is scheduled to begin with hot laps at 6:30 p.m. WoO LMS time trials and racing will follow.

Reserved seat and general admission tickets are $25 for ages 12-and-over and $10 for children 11-and-under. Seats in the track’s covered grandstand can be reserved in advance by calling Shawano Speedway at 715-526-7069. Pit passes will be $40.

Shawano Speedway is located about 45 minutes northwest of Green Bay and three-and-a-half hours east of Cedar Lake Speedway, where the WoO LMS heads for the 26th annual USA Nationals on Aug. 1-3.

A raindate of Wed., July 31, has been set for Shawano’s WoO LMS event.