IT’S BEEN A WHILE: Davenport Gets First Outlaws Win in Almost 4 Years at Cedar Lake 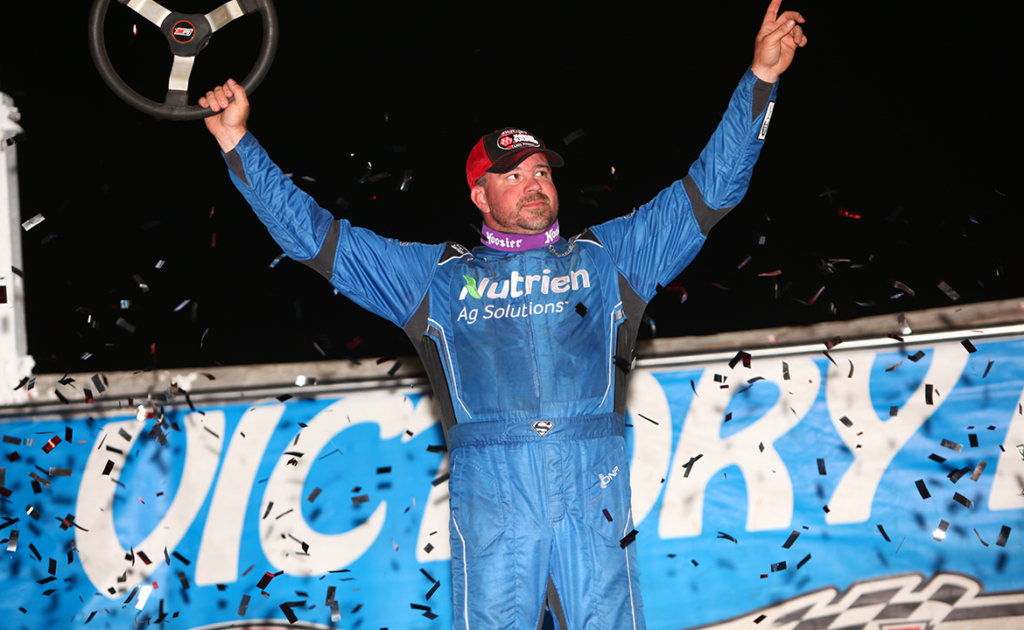 One thousand, three hundred sixty-eight days ago on Nov. 7, 2015, Jonathan Davenport emerged from his K&L Rumley-owned Longhorn Chassis #6 at The Dirt Track at Charlotte Motor Speedway to claim the sixth World of Outlaws Morton Buildings Late Model Series win of his career. Fast forward to Thursday night at Cedar Lake Speedway, and “Superman” has done it once again, leading all 30 laps en route to a big win on night one of the 32nd annual USA Nationals over Brian Birkhofer and Tyler Bruening.

It certainly didn’t come easy for the Blairsville, Georgia-native. He jetted out to the early lead but faced heavy pressure from Bruening and Birkhofer behind him once he reached lapped traffic. Davenport worked the high side for almost the entire race, while Bruening stuck to the bottom. At one point, lapped traffic was holding Davenport up enough for Bruening to stick a nose underneath the Nutrien Ag Solutions #49.

“I was sort-of at the lapped cars’ mercy,” Davenport said. “There were a couple of times that they would actually pull back by me on the bottom, so tried the bottom a couple of times. I just wasn’t as good down there and couldn’t judge off of anybody else to know how to run it.”

But Davenport was just too strong on the top side for Bruening to make the move, before a caution came out on lap 19. This reset the field, giving Davenport a clear track ahead, which seemed to be the key for him over 30 laps.

“Being in clean air was the biggest thing,” he said. “I could see the cushion better than somebody behind me.”

The ensuing restart gave Birkhofer the opportunity he needed to advance another spot, getting a great run out of turn four and diving deep into turn one to put a slidejob on Bruening. “Birky” gave it all he had in the final 10 laps to catch the leader, but Davenport was simply not going to be denied on Friday night.

This $6,000 victory goes on Davenport’s trophy shelf just one week after getting out of quite an unusual situation at Fairbury Speedway’s Prairie Dirt Classic. The Lance Landers Motorsports team experienced hauler issues on the road to Fairbury last Friday and was unable to make it to the track, so fellow competitor Mason Zeigler offered up his backup car to Davenport for him to race that weekend. He missed qualifying for the big show on Saturday, but learned how big of a difference it makes driving somebody else’s equipment. Now, he’s back in his comfort zone.

“It just feels good to be back in my own car after driving something else,” he said. “I got a little bit of a different feel, not sure if that helped me or not, but It really made me appreciate how good my stuff is.”

In the final circuits, however, it got exciting. Coming to the line to complete lap 48, Davenport got a bit out of shape as he rode the high line out of turn four. That allowed Birkhofer to close the gap, but Davenport was too far ahead. He knew he had it covered on the top, despite its risk.

“I don’t know that if he’d have made one more mistake, I would have been beside him, with the caliber of talent he has,” Birkhofer said. “But we’ve got something to work with. The car’s pretty good, obviously needs to be better. The more laps I get, I get a little bit less rusty.”

It’s been quite a while since the World of Outlaws has seen Brian Birkhofer on the podium. After taking a few years off from regularly scheduled Super Late Model competition around the upper Midwest, the Muscatine, Iowa-native could be seen in a few different rides on part-time schedules since 2014. Most recently, he’s hooked up with driver Jason Rauen to field a car this weekend at Cedar Lake.

The pair also started a race with the Outlaws back on July 24 at Davenport Speedway in Iowa. Birkhofer had a great showing, sitting on the pole of the 40-lap Morton Buildings Feature but dropped out early due to mechanical problems. Friday night was much different, as he qualified in the top five of his group, won his heat and earned the runner-up spot in the main event. And Birkhofer was very satisfied with that podium spot.

“I’m really glad. I wanted to finish a race in the top-five. That’s just how my mentality was when I raced for all those years – I want to run top-five,” he said.”

Things have changed just a bit since the last time Birkhofer raced a Late Model full-time, and he’s definitely taken notice to some of the younger stars on the circuit and how much they have to keep up with, week-in and week-out. But what a statement he made in night #1, showing he can still run with the best of them, even against such stout competition.

“Those guys are going to race hard from lap one to lap 100,” he said. “Older guys like me, out of it for a while and then coming back, I definitely feel my age a little bit.”

Tyler Bruening collected the best World of Outlaws finish of his career, claiming the final podium spot after 30 laps and some very impressive qualifying event runs. Picking up his very first PFC Brakes Fast Time Award in Qualifying, Bruening also won his heat race and redrew the pole for the Feature. He followed Davenport through traffic a bit in the Feature before losing a spot to Birkhofer after halfway, but fended off the hungry field behind him to earn his first podium finish. And how proud he is to earn it.

“I almost don’t know how to put it in words,” Bruening said. “You keep plugging away, getting better and better, and things just start falling into place for you. My car has just been phenomenal all year, I can’t thank my dad and the crew enough.”

Tyler’s father, Greg, owns Skyline Motorsports and fields the car for full-time World of Outlaws driver Shane Clanton. Clanton has come up big this year, getting the team their first two Outlaws victories, and how great it is to see Tyler following that up with a strong finish against the heavy competition at Cedar Lake this weekend. The team has been firing on all cylinders, and what a rebound it’s been for them since their DNF at Plymouth earlier this week.

At any given event where the #16 and #25 will both be, catch them parked next to each other. Bruening said he owes a lot of his Late Model knowledge to Clanton and his accomplishments in the sport, and it says event more about just how much team Skyline has taken off since the beginning of the year.

“Shane is a phenomenal driver, he’s a champion and ambassador of the sport,” Bruening said. “I’m just like a sponge, when ‘s got information for me as far as driving or setup tips. It’s been a huge help for me and my driving career.”