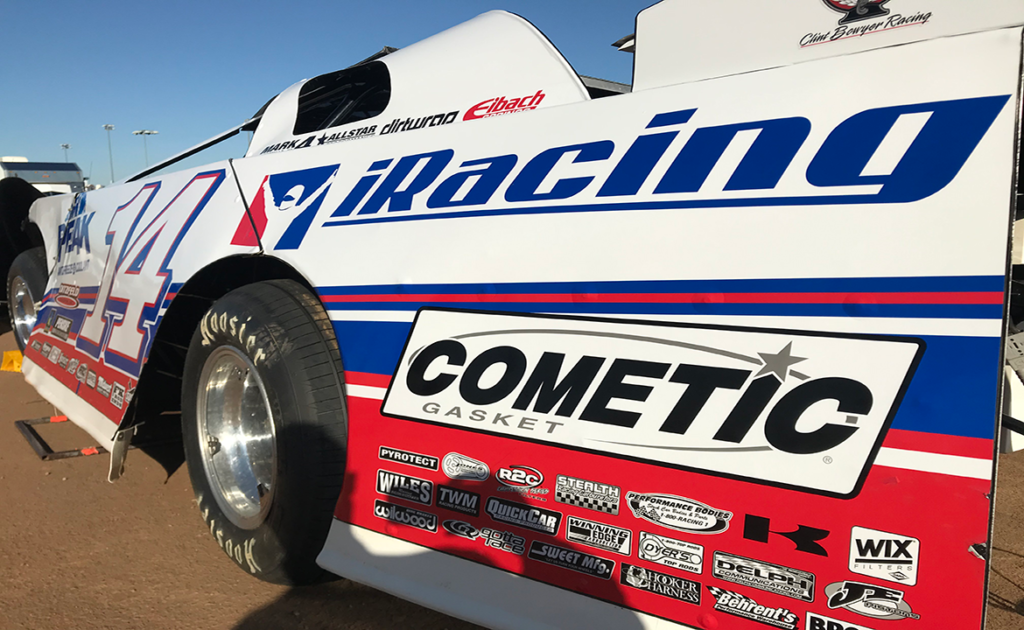 CONCORD, NC — Imagine this: The World of Outlaws puts you — the race fan — into the seat of a Late Model with an open track in front of you, having no previous real-life racing experience except a few go-kart rides each year at the local fair. Would you be able to handle it?

You can see how it all comes together tonight at 8 pm ET on FOX Sports 1 when a collection of racing stars comes together for the World of Outlaws iRacing Invitational. Championship-winning drivers like Scott Bloomquist, Brad Sweet, David Gravel, Bobby Pierce, Kyle Larson, Christopher Bell, Ron Capps and more will take on The Dirt Track at Charlotte through racing simulation in World of Outlaws NOS Energy Drink Sprint Car Series and World of Outlaws Morton Buildings Late Model Series special events. 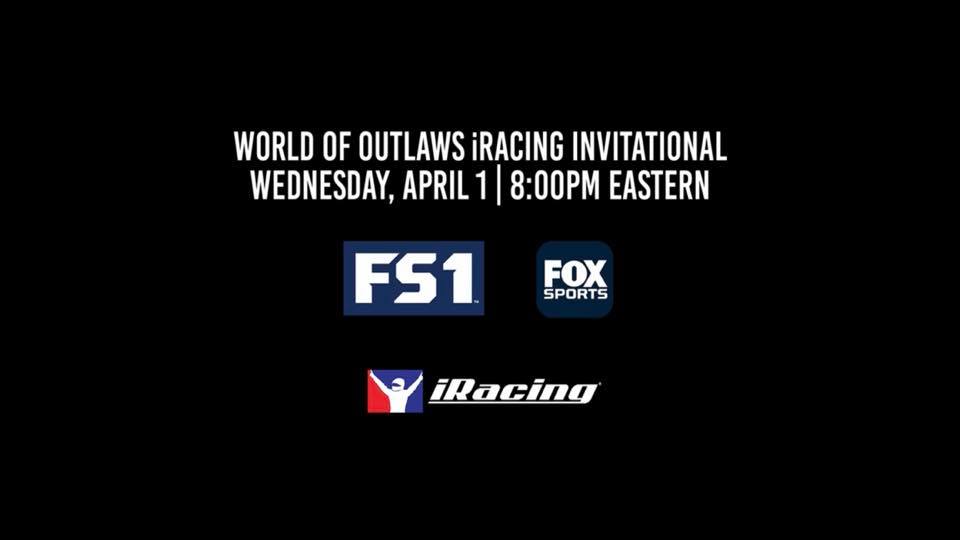 Perhaps an event like tonight’s will encourage more to participate in the growing online racing universe. For one 17-year-old virtual sim racing champ from Ashville, NY, iRacing has taken him to places he never would have guessed, including the Can-Am World Finals last November.

Blake Matjoulis was the victor of the 2019 iRacing World of Outlaws Morton Buildings Late Model Championship Series, held on the ever-popular virtual motorsports simulator iRacing. Tonight, he’ll just be watching on FS1, but will likely have had a hand in a few drivers’ car setups, as he’s become a big source for insider info to the real-world drivers.

For some background, auto-racing enthusiasts, hardcore gamers and casual fans alike can make laps aboard some of the industry’s most iconic dirt or asphalt cars on real-world tracks right from the comfort of their home with iRacing. All it takes is a high-speed internet connection, a compatible computer/monitor, a gaming wheel/pedals set and the need for speed. iRacing provides the rest.

Matjoulis began his journey to iRacing superstardom like any other avid race fan – an interest in go-fast, turn-left vehicles. Growing up just 10 minutes from Northeast Super Late Model hotspot and yearly World of Outlaws host, Stateline Speedway, watching Outlaw heros Chub Frank and Boom Briggs on a weekly basis, Matjoulis soon decided to take his interest in racing to the next level.

He gathered up some basic equipment and installed the software, and initially never thought his time with the game would carry him as far as it did.

“I honestly didn’t have much at all, just a little laptop I had that barely ran iRacing,” Matjoulis said. “It was just kinda for fun, not a tool or anything. I just got it because it looked cool and interesting, maybe someday I could get into it.”

But the more he practiced and the further invested he got into learning the mechanics of the game, the more upgrades he made to his equipment.

Soon, Matjoulis was learning to master car setups for each track and began racing with those that had the potential he did. In May 2019, he garnered the attention of Swindell Speedlabs’ Kevin Swindell and was asked to join his eSports team to compete in the big-money iRacing World of Outlaws championship series.

The best-of-the-best earned their right to compete in this professional online racing league by way of several qualifying rounds before the real season began in June 2019. Matjoulis was the winner of his qualifier series, which punched his ticket into the iRacing World of Outlaws Morton Buildings Late Model Championship Series, where he raced against 32 other competitors across a 10-race schedule on virtual renditions of famed dirt tracks including Volusia Speedway Park, Knoxville Raceway, Eldora Speedway and The Dirt Track at Charlotte.

Matjoulis capped off his iRacing World of Outlaws season with his third win in the final race at Charlotte and was crowned overall series champion – the second in two years under the age of 20, beating out some drivers twice his age.

For his efforts, a champion’s check with the summation of his winnings ($11,300), an invitation to attend the World of Outlaws banquet, a trip to The Dirt Track at Charlotte Motor Speedway to watch the Can-Am World Finals in action and a driving experience with Bowyer Dirt team owner and NASCAR veteran Clint Bowyer and four-time World of Outlaws champion Josh Richards. Bowyer will be part of the broadcast team tonight on FS1.

On Nov. 6, Matjoulis arrived in Charlotte for a day with Bowyer and his Super Late Model hero, Richards. In the upper pit area sat his racing chariot (a real, physical Late Model – nothing virtual about it) and Richards’ crew, preparing the iRacing-wrapped Rocket Chassis with two seats inside. One for Matjoulis, and one for his co-pilot, Bowyer.

“Clint’s a great guy, he was in no hurry to leave or anything, he was there for me,” Matjoulis said. “It was cool to see that they were very interested in being there and helping me learn the car before I went out. To be with those two, it was amazing, for sure.”

After a bit of discussion and car adjustments, the two strapped in and headed out onto the 4/10-mile oval for their first laps, Bowyer in the driver’s seat.

“It was crazy, I had no idea it was gonna be the way it was,” Matjoulis said. “The amount of G-force is crazy around Charlotte, the big sweeping turns. It was wild.

“When we were in there, I was just watching Clint and his movements to see how much he used the throttle and brakes so when I went out, I had a good idea of what I was capable of doing with the track conditions and such.”

After their warmup Hot Laps session, it was time for Matjoulis’ big moment. His turn to drive.

Prior to that day, his only previous real-world racing experience had been with a flat kart that he raced regularly during the summer months. He’d never once even sat in the seat of a Dirt Late Model. But there he sat, at the edge of the on-ramp, with a NASCAR driver next to him, ready to hit the track for a session of hammer-down Hot Laps on one of the most famous dirt ovals in the country.

“I slammed it into high-gear, took about one corner to get a feel for it and just kinda went for it from there,” Matjoulis said. “I’d say about after a couple of laps or so, I had it down pretty good.”

And that’s no joke. After only a few warmup laps, Matjoulis was wheeling the car around the track at full speed as if he had several races under his belt already.

“Then it was time to pull in, and Clint asked me about the car, and I was already telling him what I thought the car could use,” Matjoulis said. “We ended up changing the rear shocks and I went out again.”

His next session was even better than the first, and Bowyer really took notice, applauding Matjoulis’ efforts each time he returned to the pit area. By the end of the session, Bowyer seemed very impressed and rather ecstatic with the novice wheelman’s ability after just two times on the track.

Looking back, Matjoulis said he was able to apply almost everything he learned in the game onto the real-life track. A few major differences being the feeling of the weight transfer in the seat and how the rear suspension moves when more throttle is applied.

“The only thing different on the iRacing simulator to real-life is, you have an actual feel for the four-link suspension in the rear in real-life, but you can’t feel that in the simulator,” Matjoulis said. “But the movement and throttle control you use on iRacing was very similar to Bowyer’s car, especially when they changed the shocks over. They kept the car a lot more stable.

“The foot pedals were something I used from iRacing in real-life the most. Just setting the car with the throttle into the corner and exiting the corner was the biggest thing, and I think iRacing definitely helped me with that.”

In the days and even hours before the sessions began, he said the nerves were definitely making their presence felt. But once he got to meet everyone, got strapped in the car and hit the gas, it all went away. He immediately felt the similarities from the simulator and applied them to the real track.

“They let me get a lot of laps in, so honestly by the end, I was really comfortable with the car,” Matjoulis said. “So, I’d say that in reality, iRacing really helped endure this experience. With the feeling of the car and the adjustments you need to make to be comfortable on the track is definitely similar too.”

Of course, another big factor in his success on the real track was the tutelage of Bowyer and Richards before and after each session.

“Clint explained a lot about how the track was going to change and how it was going to slick off, how we might have to change lines,” Matjoulis said. “He also helped a lot with, ‘alright, what do we need to change on the car to help you go faster?’

“Josh helped the technical stuff, like driving. He told me the biggest thing is just don’t let off, because if you let off, you’re just going to be pointed straight for the wall.”

Both of Matjoulis’ parents were on-hand to watch him drive and to meet Richards, Bowyer, and just take in the overall experience of the Can-Am World Finals. In sum, it was an experience he said they’d never forget.

Today, Matjoulis says he’s prepared to take on another season of sim racing, aiming to become the first-ever back-to-back iRacing World of Outlaws Late Model champion. Until the new season starts, he’ll be entering more money races online and growing his skills each day. One day, he said, he would love for the opportunity to cash-in on his virtual world experience for a chance to drive a real Late Model competitively on a regular basis.

As it stands, virtual simulator racing has quickly become one of the most popular forms of online auto-racing entertainment available. Long gone are the days of settling for a cartoony videogame at a local arcade; iRacing has been providing both hardcore race fans and professional drivers alike with a platform to test their skills on a life-like track of their choice since 2008.

And for anyone that still doubts the realism of a simulator and its application into the real world, just ask Blake.