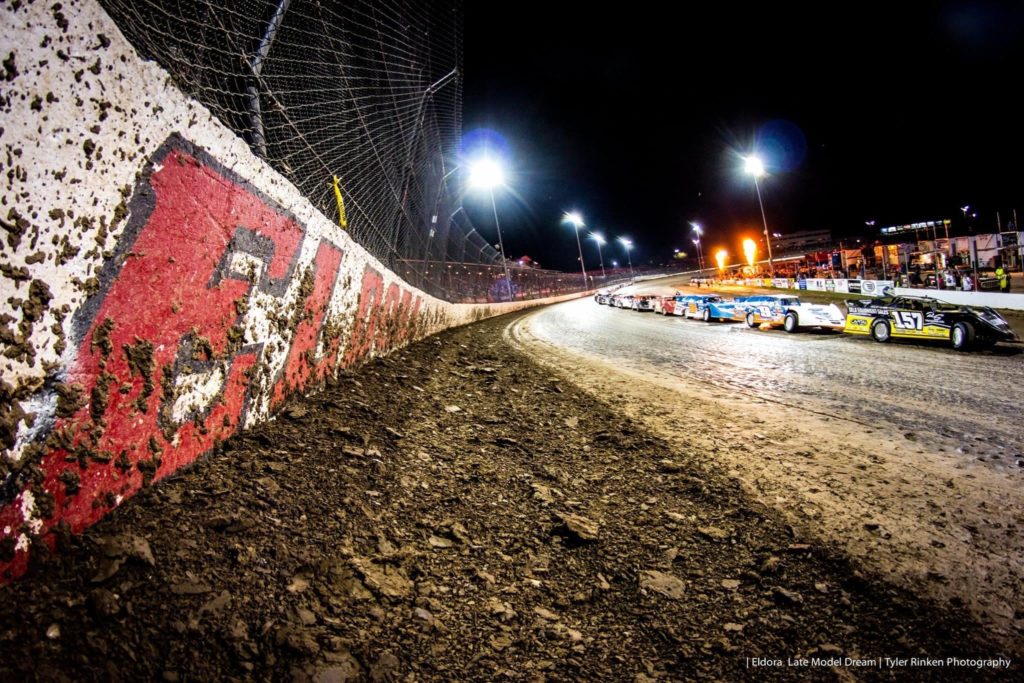 Replacing the Dirt Late Model Dream, which has been postponed to 2021 due to the COVID-19 pandemic, this one-off, invite-only, finless event at Eldora Speedway will feature 48 of the nation’s best battling over three days with more than $200,000 on the line. With the event closed off to the public due to local restrictions, fans can catch all of the action at home via FloRacing.

Among the invited 48 competitors this weekend are eight full-time World of Outlaws Morton Buildings Late Model Series drivers. Four of them are former crown jewel winners at Eldora with hopes of more gold in sight, several others have shined at the Rossburg, Ohio half-mile in the past and look to solidify their resumes this weekend, while one young rookie is focused on proving his spot is well deserved.

The GOAT to many, Bloomquist is without a doubt a living legend of late model racing, even more so when it comes to the famed Eldora Speedway. “Black Sunshine” has racked up FIFTY, count ’em FIFTY, feature starts among all crown jewel events at Eldora with eight Dream titles and four World 100 victories to his credit. He’s finished on the podium in HALF of his starts, including a third-place effort in the Eldora Million, and earned a whopping 41 top tens in those 50 starts. Along with his unrivaled numbers, the Tennessee racer is also unrivaled in the drama department at “The Big E.” While his start to 2020 has been relatively lackluster (8th in WoO points with four top tens), you can never count out the possibility of Bloomquist turning up the heat when it comes to Eldora.

In the conversation for greatest active driver to never win an Eldora crown, Madden has shown speed, but lacked a relationship with lady luck when it comes to showtime on the big stage. In 25 crown jewel starts, the South Carolina native has racked up four top five finishes and 14 top ten efforts. However, this could be the perfect opportunity to strike for Madden. After joining Scott Bloomquist Racing last August, Madden pickled up three consecutive wins worth $140,000 at the USA Nationals, North/South 100 and Topless 100, proving his crown jewel prowess. In September, he drove the No. 0M to a fifth-place bid in the World 100, a result he and SBR will be drawing momentum from this weekend.

With his confidence back after a weekend sweep at Davenport Speedway, Sheppard enters Stream weekend as a heavy favorite to take home the $50,000 payday. It was just last June when B-Shepp drove the Rocket1 machine to his first-career Eldora crown jewel with a $100,000 victory in the Dirt Late Model Dream, a win that came down to a nail-biter at the finish line between he and Dale McDowell. In all, the New Berlin, Ill. gasser has started 11 crown jewels at the half-mile with two podium appearances and four top ten results. The current World of Outlaws Late Model Series points leader will have his eyes set on being the first, and hopefully the last, winner of the Stream.

Sitting second in World of Outlaws Morton Buildings Late Model Series points, Weiss not only brings in success from the opening portion of 2020, but the Canadian caught on at Eldora Speedway in 2019 and produced a handful of stellar results at the Ohio facility. Last June, he won a preliminary feature at the Dirt Late Model Dream and ended up seventh in Saturday’s finale. Last September, he won the Earl Baltes Classic before earning a career-best third-place effort at the World 100. A two-time winner with the Outlaws already, Weiss will be a considerable favorite to be near the front of Saturday’s $50,000-to-win, 67-lap feature.

The current World of Outlaws Morton Buildings Late Model Series Rookie of the Year leader, Winger will be making his third career appearance on the Eldora high banks this weekend. With no previous crown jewel starts to his name yet, the 20-year old young gun enters on a mission to prove himself worthy against the nation’s best. Fresh off his first World of Outlaws heat race win and front row feature start at the Davenport half-mile, Winger is as focused and as confident as ever.

Moving into the top five in World of Outlaws points over the weekend, Junghans continued his slow ascent up the ranks with a solid weekend at Davenport. Now, the Kansan has set his sights squarely on Eldora Speedway for the Dirt Late Model Stream Invitational, where he hopes for a $50,000 breakthrough on Saturday night. His best career crown jewel finish at “The Big E” came last June when Junghans finished sixth in the 100-lap Dirt Late Model Dream, a night that saw five World of Outlaws stars inside the top ten.

He’s already got a Dream title under his belt, now Erb eyes a STREAM championship this weekend at Eldora. The 2016 Dream winner, Erb’s breakthrough was a massive triumph for himself and the state of Illinois, one he followed up with a runner-up effort in that year’s World 100 in September. In all, the “One Man Band” has 19 Eldora crown jewel feature starts with four podium appearances and seven top ten results in the books. The Carpentersville, Ill. native is seventh in World of Outlaws points at the moment, and hopes a big win at Eldora could turn his season around.

The second most experienced Outlaw when it comes to Eldora, Darrell Lanigan’s mark of 45 crown jewel starts at the Ohio track is slightly behind Bloomquist’s unmatched total of 50 starts. While he hasn’t struck gold since his 2003 conquering of the Dirt Late Model Dream, the Bluegrass Bandit has been a threat year-in and year-out with countless preliminary wins to his credit. He’s got ten podium trips and 26 top ten finishes to back up his impressive Eldora resume. Running third in World of Outlaws points, the Kentucky resident comes into the STREAM with a head of steam and a lot of motivation on mind.

You can watch all eight World of Outlaws stars and 40 more of Late Model racing’s best go head-to-head at the Dirt Late Model STREAM Invitational from Thursday-Saturday, June 4-6 live on www.floracing.com.