Gearing Up for the Great Plains 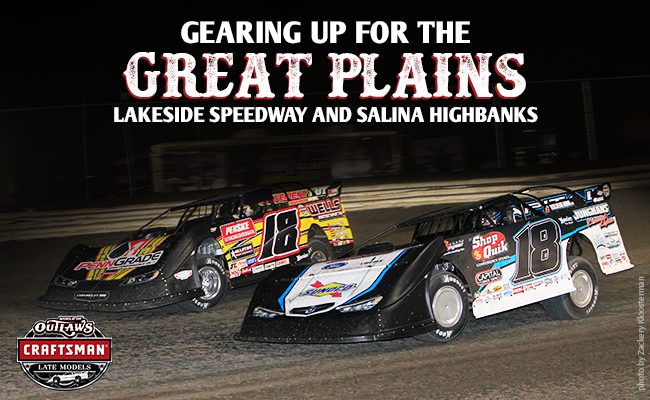 CONCORD, NC— April 6, 2017— The World of Outlaws Craftsman® Late Model Series heads to the Great Plains to top off the month of April. The first stop will be on April 28 at Lakeside Speedway in Kansas City, KS, followed by Salina Highbanks Speedway in Salina, OK on April 29.

Lakeside Speedway is located one hour and 45 minutes from full-time Outlaw Chase Junghans’ hometown of Manhattan, KS. This is the first time the series has visited Kansas since Junghans joined the Series in 2014.

“This race will definitely be fun for sure,” said Junghans. “Anytime you only have to travel an hour-and-a-half to go to an Outlaw race it is definitely exciting. I’ve raced there plenty of times, and that definitely helps your confidence headed into the race and gives you hope of running good. Out here in the Midwest a lot of our tracks are bigger half-miles, and that’s what I’m used to running on. I I don’t know if that means I have an advantage, but I’m used to racing on that kind of track and have a better idea of what I have to do to my car.”

Junghans’ roots run deep at the half-mile track. Before he was old enough to enter the pits, Chase and his brother Grant would tag along to Lakeside to watch a car their father owned race there on Fridays. Once the pair was old enough to get into the pits they began to help with the car, and then eventually both would sit behind the wheel.

Grant lost his battle with cancer last year after six years of fighting. In honor of his love for racing, the Junghans family held the Grant Junghans Memorial Race at Lakeside Speedway last year.

“Pretty much the main reason we held it there was because we grew up at that track. It’s also one of the most racey tracks around my house,” said Chase. “One of Grant’s last wishes was that he wanted to have a memorial race that paid $1,000-to-start and $10,000-to-win, so we made it happen. I’m pretty sure it was standing room only at the track that day. It actually rained out the first time and just as many people showed up when we rescheduled.”

The family has not decided if they are going to host the event again this year, but every day Chase continues to live out Grant’s and his biggest passion.

“He told me not to quit racing because that’s all he wanted to do when he was sick, so I told him I didn’t plan on it,” said Chase.

Kansas City has a rich history in dirt racing, and Lakeside Speedway opened in its prime. The track first opened in 1955 as a dirt track, switched to asphalt in 1989, and then switched back to dirt in 2001. The track boasts modern grandstands, suites, a press box and an adjacent campground for fans.

“The name, World of Outlaws Craftsman Late Model Series, brings a high caliber to this event and to this track,” said Pete Howey, Lakeside Track Promoter. “You also bring the most well-known drivers in the country to face our local and regional drivers. The Series drivers are so smooth in their cars. They have such a talent for driving that it makes it look easy when they are out there. My fans know that seeing these drivers and going to this event is going to be a big deal. This track is 3/8 at the top and 4/10 at the bottom and 75-feet-wide all around. This is a fast track and this race is going to be awesome.”

Tickets for this event are available online now and at the gate on the day of the event.

After the 50-lap $10,000-to-win race at Lakeside Speedway the Series will load up, head to Oklahoma and repeat the action for the second night in a row.

The World of Outlaws Craftsman Late Model Series will collaborate with MARS DIRTcar Racing Series at Salina Highbanks Speedway to have a head-to-head battle. MARS is a regional traveling series in the Central Plains with an East- and a West-specific schedule.

“We run in the Midwest area a lot, and we feel like we can bring a little extra talent to this event and a lot of competition for the Outlaws,” said MARS Series Director William Scogin. “I think this is going to be an awesome show. Hopefully, one of our guys will win, but I know you all will bring some tough competition!”

Tony Jackson, 2016 MARS Points Champion, has visited Salina Highbanks regularly in the past three seasons and has landed on the podium six of his last nine visits to the track.

Salina Highbanks Speedway originally opened in 1992 but was then shut down for a number of years only to be reopened in 2011 and configured to its modern day look of 3/8-mile track with 12-degree banking on the straightaways and 22-degree banking on the turns. The Oklahoma track also boasts a unique steakhouse restaurant that overlooks the front stretch, called Finishline Restaurant.

Tickets for this event are available on the tracks website and will be available at the gate on the day of the event.

Headed into the two-day show in two-states, Brandon Sheppard will lead the way in points by 54 over Chris Madden and Tyler Erb, who only spare eight points between them, and Brian Shirley who is behind Erb by two. Click to view the current points standings.