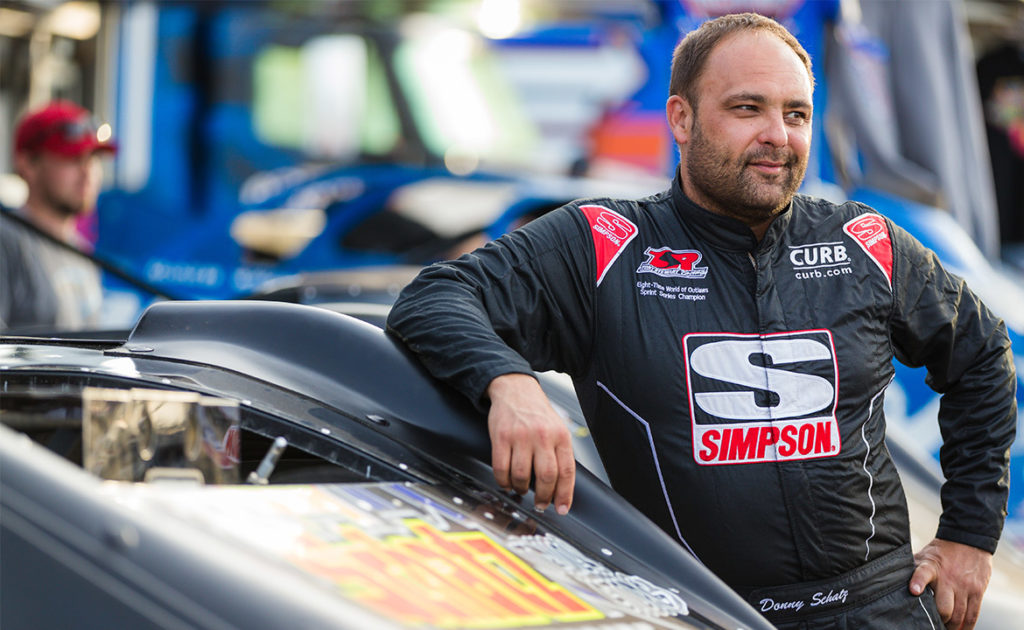 One of Donny Schatz’s most proud performances in his career is a third-place run with the World of Outlaws at River Cities Speedway in his home state of North Dakota.

When the 10-time Sprint Car Series champion isn’t spending his weeks chasing another title, he trades his winged chariot for a fendered rocket. Which is exactly his plan this weekend.

With the Sprint Car Series’ next race not until Tues., July 21 at Lernerville Speedway for the $25,000-to-win Don Martin Memorial, Schatz, of Fargo, ND, is breaking out his self-owned #15 Rocket Chassis Late Model to run with the World of Outlaws Late Models at River Cities Speedways in Grand Forks, ND on Fri., July 17 and at Red River Valley Speedway in West Fargo, ND on Sat., July 18.

“It’s really hard for me to go around home and go to local races during the week or off time and race a Sprint Car and say it is for fun, even though it is for fun, when you do it professionally,” Schatz said. “To do a Late Model is a completely different animal. I don’t do it professionally. I do it for fun. I do it on the side. It makes a lot more sense. It allows me to stay more connected to my local tracks here in North Dakota and Minnesota. It’s fun to stay connected to the local scene for me.”

Late Models were originally never on Schatz’s radar. However, his father was intrigued by them and had told Schatz he should drive one to broaden his horizon. His passion for the cars didn’t come until 2012 when he got the opportunity to run the Prelude to the Dream at Eldora Speedway.

Running one of Darrell Lanigan’s cars, Schatz beat the likes of 20-time World of Outlaws Sprint Car champion Steve Kinser, Jimmie Johnson, Kurt Busch, Danica Patrick, Tony Kanaan and Bill Elliott to finish fourth in the special event. From then on, he was hooked on Late Model racing.

“It was a really fun event,” Schatz said. “It was huge for our sport to have myself and Steve Kinser there and be a part of the big race. If you ever do something that you had a great time at but weren’t really good at, you feel like you want to give it another go.”

Since running the Prelude, Schatz has started more than 60 sanctioned Late Model Features – 19 of them World of Outlaws Late Model events.

Of his World of Outlaws starts, he’s collected one top-five and five top-10 finishes – his most recent top-10 coming in February during the DIRTcar Nationals at Volusia Speedway Park.

Winning in a Late Model is “very rewarding,” Schatz said, and he attributes the success he’s had to an all-star list of friends.

“Most of the time I thank all of that success to (iconic team owner and chassis builder) Mark Richards for giving me a running start,” Schatz said. “I’ve had a lot of help from a lot of guys – including (four-time World of Outlaws Late Model champion) Josh Richards and (two-time and defending World of Outlaws Late Model champion) Brandon Sheppard.

“So many people over the years have helped. It’s like cutting corners. If you can cut a corner somewhere and it helps out, that’s a good thing. It’s rewarding I can tell you that. Maybe someday I’ll win at least one (World of Outlaws) Late Model show. But you just never know.”

In comparison to his Tony Stewart/Curb-Agajanian Racing #15 Sprint Car, Schatz said the closet thing it and his Late Model have in common are he still puts the tear offs on his helmet the same way.

“You know, we use set up blocks and put them under the axle and have torsion stops,” Schatz said. “In their world, they have a spring smasher and it sets the load to that corner. They know what the load needs to be. Fifteen pounds could be the difference between a good car and a bad car. There’s not a lot of error there. In the Sprint Car world, we can wind multiple turns of weight in one corner and not feel a big difference.

“It just tells you the correlation between a torsion bar and a spring, how much difference there is in the way they work. A spring has memory. A torsion bar doesn’t really have anything. It’s old school technology. I wouldn’t even call it technology. It’s just something that’s stuck around in our sport and nobody has really changed. It would be fun one day to make them similar but today it’s just not happening.”

Even the way the Late Model drives compared to the Sprint Car forces Schatz to change his entire mentality on how to run the car.

“The Late Models rotate with the left rear in the corner and right front has to be buried (into the track),” he said. “They turn on the gas, but they don’t really turn when you’re off the gas pedal. There’re so many different scenarios. The way the car carries the air over it is just as important as the Sprint Car. But the Sprint Car pulls it a different way and does it completely different. You have to keep a completely open mindset and a whole different scenario about it.”

While the Late Model races are a time for Schatz to shed the stress of running for a championship, that doesn’t negate his competitive nature.

He wouldn’t consider himself a relaxed racer. Especially when competing against the likes of Sheppard, 2004 World of Outlaws Late Model champion Scott Bloomquist and last year’s Rookie of the Year Ricky Weiss.

“Anytime you put the helmet on at the racetrack you’re not going to settle for anything less than checkers,” Schatz said. “It is relaxing in some scenes. In others, you feel like you’re beating your head against the wall a little bit because you want to do better than you really do. It’s a tough battle with those guys. They stay on top of it. They eat, sleep and drink it. And if you don’t do that every day it’s hard to stay competitive.”

Schatz has mentioned before that at some point in his career he might consider transitioning from racing a Sprint Car full-time to a Late Model. He hasn’t sold himself on that idea yet. But isn’t completely dismissing it either.

“At the end of the day, I love what I do with the Sprint Cars,” he said. “I don’t know if I would ever walk away from it to do one or the other. It would be cool. In a perfect world, a guy could run both Series. But that would be pretty farfetched to be able to do and be competitive. Once you get to racing for championships that gets to be your focus and what you want to do. Maybe I’ll never be that competitive in the Late Model world, but you never know. Maybe years down the road that’ll change.”

For now, he’s going to enjoy a rare opportunity to run with the Outlaws in his home state this weekend before returning to his Sprint Car next week.

If you can’t make it to the events, you can still watch all three live on DIRTVision.