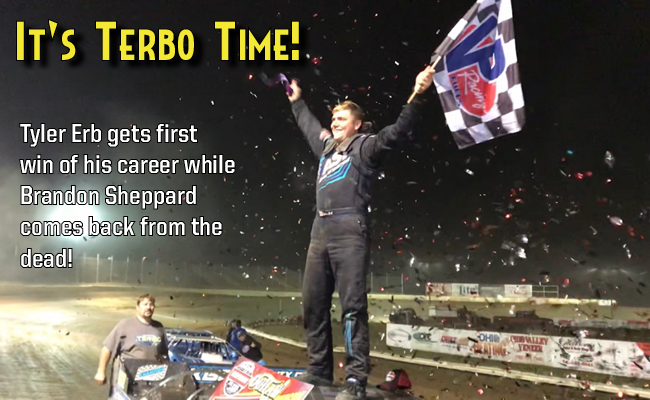 Erb finally tastes Outlaws victory in Atomic Rd. 1 while Sheppard and his crew pull the car together for an amazing comeback

CHILLICOTHE, OH – September 28, 2018 – A driver’s first win is always special, but when it’s been almost three years in the making, some drivers can easily get frustrated. Tyler Erb never lost his composure once on Friday night at Atomic Speedway, as he picked up $8,000 and his very first World of Outlaws Craftsman Late Model Series win in the early hours of Saturday morning.

“I never would have thought I’d have won come the start of the feature,” Erb said. “I just wasn’t really that great going into it, but it just all worked out. It raced a lot better in the feature than anyone expected, so that helped. Nothing fell off, it was just our night.”

Heavy rains that soaked the track through in the days before the event, combined with the sub-60 evening temperatures and high humidity made for a very rough racing surface – one of the roughest the Outlaws raced on all season. Potholes, ruts and other tiny obstacles claimed big pieces of other drivers’ nights, as entrants like Jason Jameson and Steve Casebolt went through difficulty keeping their cars in one piece during the race.

But Erb was smooth, super smooth in the feature through each corner, using all three lanes to make passes on his way up to the top spot. He made 16 of them, most of which were inside of 20 laps, having to change grooves several times in order to get by. Erb said he actually looked to those that were faster than him early on for ideas on which lane was the fastest.

“That’s where I picked up the most speed, I feel like, in three and four” Erb said. “I could just run in between the holes almost and get a better drive off of [turn] four than most people could. I think that’s where I made the most ground up.”

“Terbo” was forced to come from the 17th starting spot, as he had to run one of the two Last Chance Qualifier races after finishing one spot out of a transfer position in heat two. As a whole, his night may not have started out the way he would have liked, but it worked out better than he could have ever hoped for in the end.

Erb has won other feature races before, including one at the Late Model Knoxville Nationals earlier this month, but never a World of Outlaws tour race. Now that the monkey’s off his back, Erb said he’s looking forward to what his future holds as an Outlaw.

“It’s exciting, this is three years in the making and I’m just thankful it’s over” Erb said. “I never really thought about winning that deal until I got to second and knew I was good enough to race with [Moran]. Now, I can hopefully move on to more wins and more consistent runs.”

Devin Moran was having quite the race out front and looking to be a repeat winner, as he led 34 of the 40 scheduled laps. Unfortunately for him, Erb just seemed to have the better setup at the end of the race, as he made the pass for the lead with only six laps to go on a bonzai slidejob in turn one.

“It’s just frustrating, I mean we’ve brought really good racecars here lately and we aren’t quite where we need to be, obviously,” Moran said.

Track conditions also bothered Moran a bit as well, forcing him to drive where his car did not seem to want to go.

“It was real bad getting into [turn] one, so I was trying to go above it,” Moran said. “I started going to the bottom and it wasn’t nearly as good.”

Tire wear on these rough surfaces can also bring about an issue – something Moran said he should have been more conscious of.

“I used up my right-rear tire a little too hard, I think” Moran said. “Just a driver error, I probably shouldn’t have went that hard that early. But it’s one of them deals where you’re out front and it’s hard to judge.”

Completing the podium was a driver who went through a lot of sweat, tears and (literally) blood to march his car back into the top three. If it were not for a blown right-rear tire early on and a rock flying into the cockpit and breaking his helmet, Brandon Sheppard might have had a better shot at the win.

“We just had a really good piece,” Sheppard said. “I was a little bit sung there toward the end of the race, but the track was just getting more rough, and the lines I was running early, you couldn’t really run as much later.”

Misfortune struck Sheppard on a good run yet again this season when he cut a tire down on lap 15, forcing the crew to bring out the hammers and even a grinder, in addition to the tire gun, to get the Valvoline No. 1 back onto the track. Nonetheless, the crew made repairs in a frenzy under yellow, and Sheppard was able to pass a good chunk of cars before another incident only a few laps later.

A big rock or chunk of mud must have flown through Sheppard’s cockpit and hit him right in the mouth of his helmet, actually breaking pieces off of it. Track officials let him stop under the next yellow to switch helmets, and get a rag for his bloody nose…

Despite all of his troubles, however, the Rocket Chassis house car was able to climb all the way back up to third from the rear in the last 25 laps of the race for an impressive display of passing and traffic maneuvering on such a rough surface.

“Luckily, our car was good enough and everything was strong enough to hold together to run the rest of the race,” Sheppard said. “All things considered, third place, I guess we’ll take it.”

Night number two of the Outlaw Invasion at Atomic Speedway continues today, with hot laps scheduled to begin around 6:30. For more information, visit our FAQs page.