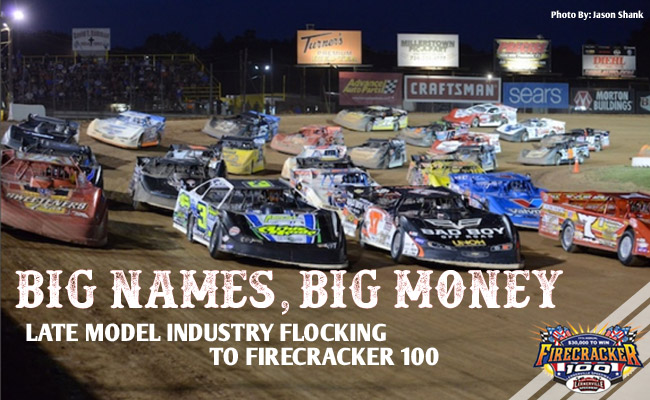 CONCORD, N.C. — June 7, 2017 — The Firecracker 100 traditionally draws one of the largest Late Model fields of the season. In addition to the 12 full-time World of Outlaws Craftsman® Late Model Series racers, Late Model drivers from across the country will converge June 22-24 on Lernerville Speedway. The three-day event in Sarver, PA, culminates with one of the biggest paydays for Dirt Late Model racing. Thursday’s and Friday’s races set up a $30,000 payday for the Saturday finale at the Pennsylvania oval northeast of Pittsburgh.

Brandon Sheppard in the Rocket1 house car, will lead the way into Lernerville for the Firecracker 100 as the Series’ top dog. With five wins, 13 top-fives and 15 top-10s in 16 races, Sheppard currently leads the World of Outlaws Craftsman® Late Model Series Championship Point Standings by 122 points over Chris Madden.

South Carolina’s Chris Madden has several big wins in his career and got off to a fast start in 2017. He earned a victory during the second race of the season at Screven Motor Speedway and currently sits second in points with one win, nine top-five finishes and 12 top-10s.

Additionally, Chub Frank from Bear Lake, PA, has won World of Outlaws Craftsman Late Model Series events at Lernerville, but he’s chasing his first Firecracker crown. Chub and Eckert both joined the series in 2004 and have been mainstays on the tour ever since.

Shane Clanton is an adopted home state hero at Lernerville as his father-in-law, Ron Davies, was a successful Dirt Late Model driver based out of Warren, PA. In recent years, Davies fans have adopted the Georgia Bulldog as one of their own. Clanton won the Firecracker in 2010, but has also appeared in the top-10 seven out of his past nine appearances at the high-banked 4/10-mile during the past two years.

Some of the drivers who have committed to attend the Firecracker 100 include several Series outsiders who will also be looking to steal the the big purse from the Outlaws.

The defending Firecracker champion, Scott Bloomquist, is returning to the stage at Lernerville looking for a repeat. So far this season, the driver of the No. 0 machine has racked up five wins in the Lucas Oil Late Model Dirt Series and is the current points leader.

Tim McCreadie, the 2006 World of Outlaws Craftsman Late Model Series champion, has secured two wins in 2017 with the Lucas Oil Late Model Dirt Series, and will be fighting for another for his first Firecracker victory.

Of the 16 Outlaw races this season, four outsiders have picked up Series wins; and all of them will be at this year’s Firecracker 100 vying for another: Don O’Neal (Volusia Speedway Park), Timothy Culp (LoneStar Speedway), Brandon Overton (Smoky Mountain Speedway), and Mike Marlar (Duck River Raceway Park).

Overton claimed his second career Series win this season; his first-ever win was during a preliminary race for the Firecracker 100 last year. This season also marks O’Neal breaking a 13-year winless streak with the World of Outlaws with his win at Volusia Speedway Park early on this season.

Jimmy Owens will also make the trip north to Pennsylvania for the Firecracker. Owens finished one spot shy of sweeping the night during the World of Outlaws Craftsman Late Model Series feature last Friday night at Tazewell Speedway.

Jonathan Davenport currently sits second in the Ultimate Super Late Model Series point standings. He has entered two Outlaw events so far this year and landed a fourth-place finish at Cherokee Speedway and a seventh-place finish at Smoky Mountain Speedway.

Local hotshots Russ King, Mike Norris, Jared Miley, and Alex Ferree will also look to defend their turf at Lernerville Speedway when the masses invade their track for the Firecracker 100.

In addition to the hot action on the track, the Firecracker 100 includes an incredible array of family-friendly events that allow fans of all ages to interact with their favorite drivers. All drivers have been invited to participate in a kickball tournament organized by the Jeff Gordon Children’s Foundation. After the kickball tournament there will be a raffle/auction where fans can cross their fingers in hopes of picking up a piece of racing memorabilia from their favorite drivers. All proceeds from the auction and the kickball tournament will benefit children’s cancer research.

Fans will also have the opportunity to challenge some of their favorite Late Model drivers in a corn hole and a horseshoe tournament. Throw in an autograph session and a post-race concert on Thursday and Friday — the Firecracker 100 has it all.

The 11th annual Firecracker 100 at Lernerville Speedway will take place June 22-24. General Admission tickets are $34 for Thursday or Friday, and $40 for the finale on Saturday. Three-day passes are available for $69. Tickets for all three days of the Firecracker 100 weekend are available now by calling 1-844-DIRT-TIX (347-8849), or by visiting WorldofOutlaws.com/Tickets.

For more information on the schedule of events and frequently asked questions click here.