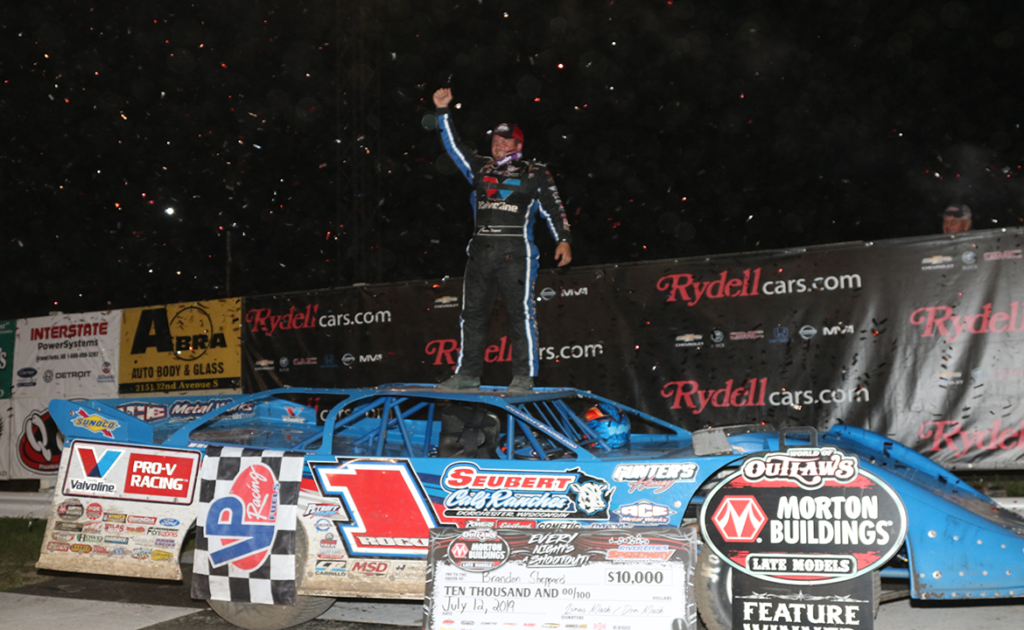 If anyone in the River Cities pit area was going to be strong enough to take down the Goliath of Rocket1 Racing, it was looking like former local regular and current Rookie of the Year points leader Ricky Weiss had a shot, but after chasing Sheppard around the quarter-mile bullring for half the race, Weiss came up just one spot short as Sheppard earned his fifth consecutive checkered flag and the 50th win of his World of Outlaws career.

Weiss was right there the whole race. Coming from his sixth-place starting spot, Weiss jumped up to the fourth spot by the first lap and put a move on Shane Clanton to take the runner-up spot on a lap 19 restart. Once he cleared the Skyline Motorsports #25, Weiss was on a mission to catch the blue #1.

“Sheppard was just so strong tonight, he would have had to slip up for us to get by him,” he said.

Indeed, Sheppard was very strong. On the top, in the middle, on the bottom, it just didn’t seem to matter where he put the car, it cut through lapped traffic like a hot knife through butter. And there was quite a bit of traffic to deal with, as “The Rocket Shepp” faced multiple waves of it through 50 laps on the tacky racing surface. 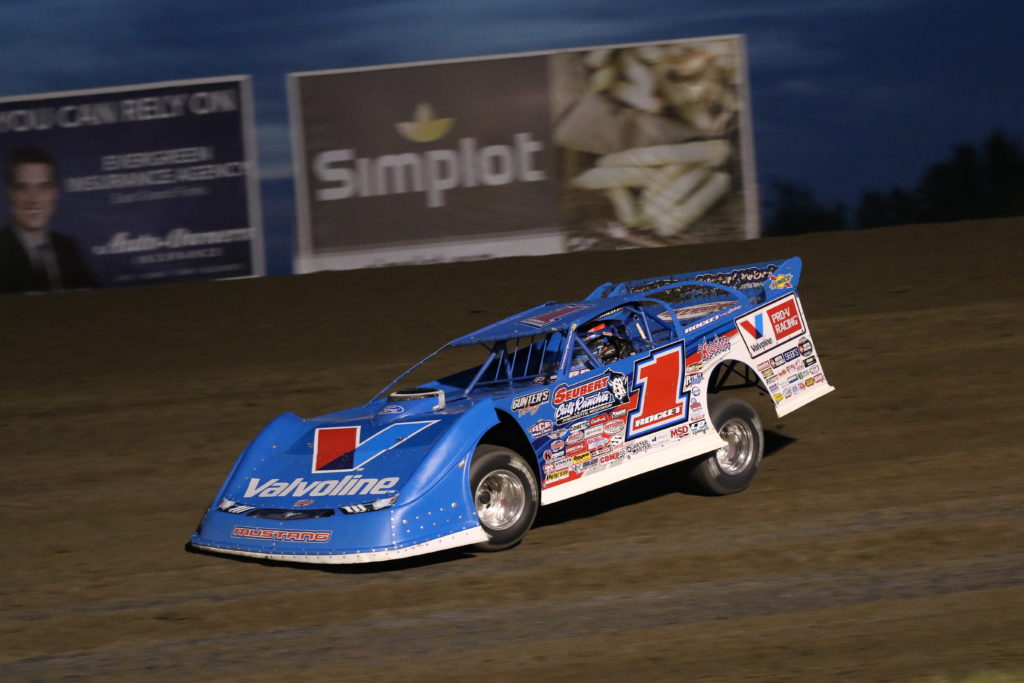 “Our car has just been so good and maneuverable,” Sheppard said. “That was key right there, to be able to be maneuverable when I got to lapped traffic and so I could get around Shane [Clanton].”

Sheppard originally took the race lead away from Clanton on the ninth lap and held it through the next 41 laps, thanks to a great setup by his crew and car owner Mark Richards. This victory marks Sheppard’s first in the state of North Dakota and Richards’ second at River Cities. His only other win in Grand Forks was exactly one decade and two days ago with Sheppard’s predecessor aboard the Rocket Chassis house car, Josh Richards.

With all of his previous experience racing at River Cities and on other tracks of comparable size, Richards has taken a note or two on how to set the car up for success on any racetrack the team goes to.

“We’ve got a good baseline that allows us to unload almost anywhere and be in the ballpark,” he said. “Then we just make fine-tune adjustments from there. But Brandon Is an incredible driver who gives us incredible feedback, which enables us to tune the car to make it go like it does.”

Weiss’ mission to catch Sheppard, both in and out of traffic, may have fallen short again, but what a streak the Rookie standout has been on as of late. Three consecutive podium finishes has given the Headingley, Manitoba-native a great boost of confidence heading into Ogilvie Raceway on Saturday and Red Cedar Speedway on Sunday.

“The momentum’s great,” Weiss said. “It just helps our team get the car better, get our tires prepared and try to get ahead of the game. It’s a little bit of a truck out there tomorrow, but we don’t have too much work to do on the car. Just an oil change – our Vic Hill engine ran great.”

River Cities was formerly one of Weiss’s proving grounds – a place where he built a fanbase amongst his fellow WISSOTA Late Model drivers before hitting the road this year to tackle the World of Outlaws tour with eyes on the Rookie of the Year title. So far, his campaign is going swimmingly, racking up nine top-five Morton Buildings Feature finishes and sitting just 32 points out of second place in Series points. 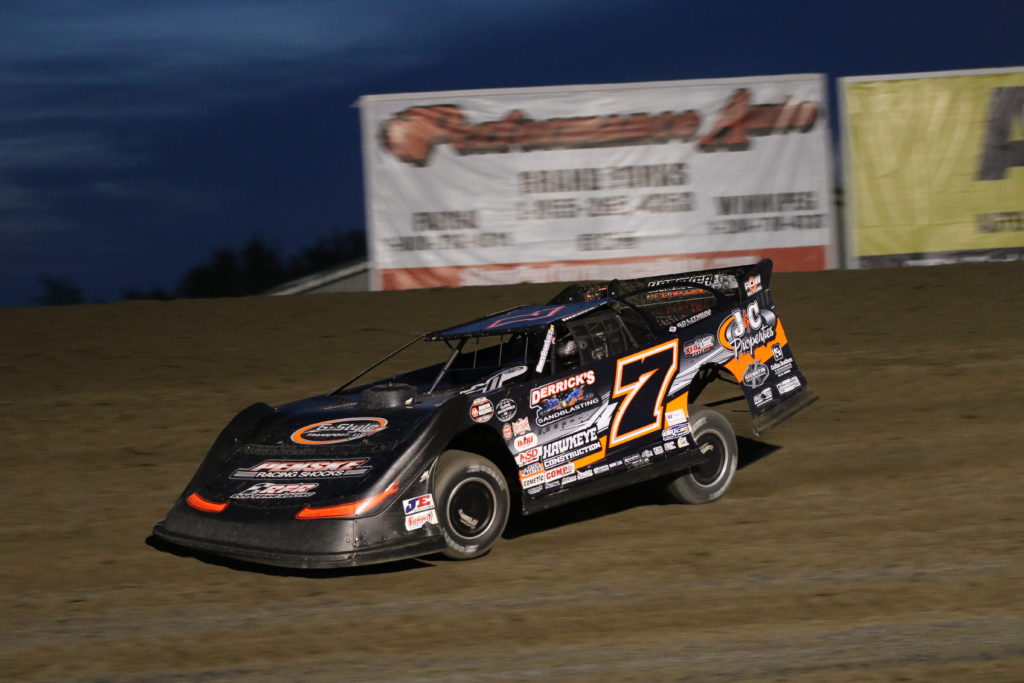 And how his fans have noticed. Immediately after the race’s completion on Friday night, Weiss’s pit stall became flooded with a sea of his most adoring fans, best friends and supportive racing family. Some of which came quite a distance from home to get a bit of new merchandise, have a chat with their favorite Canadian driver and see him earn another great finish.

“It’s pretty cool, I can’t thank everyone enough for all of their support,” Weiss said, in the middle of signing an autograph. “There’s so many people that don’t get to see us too much now throughout the year. But the people that came up to me tonight told me they’ve been buying DIRTVision and just doing anything to watch us race.”

“When they’re able to come, they’re traveling hundreds of miles to see us,” Weiss continued. “It’s pretty cool to know the support we’ve got, and to see your name on the t-shirts too.”

Completing the podium and picking up his best finish aboard the World of Outlaws tour this year on Friday night was none other than “The One-Man Band,” Dennis Erb Jr. Coming from the fifth starting spot, Erb drove his usual line around the bottom and made steady passes on Jimmy Mars and Shane Clanton to earn a spot on his first podium finish with the Outlaws this year. 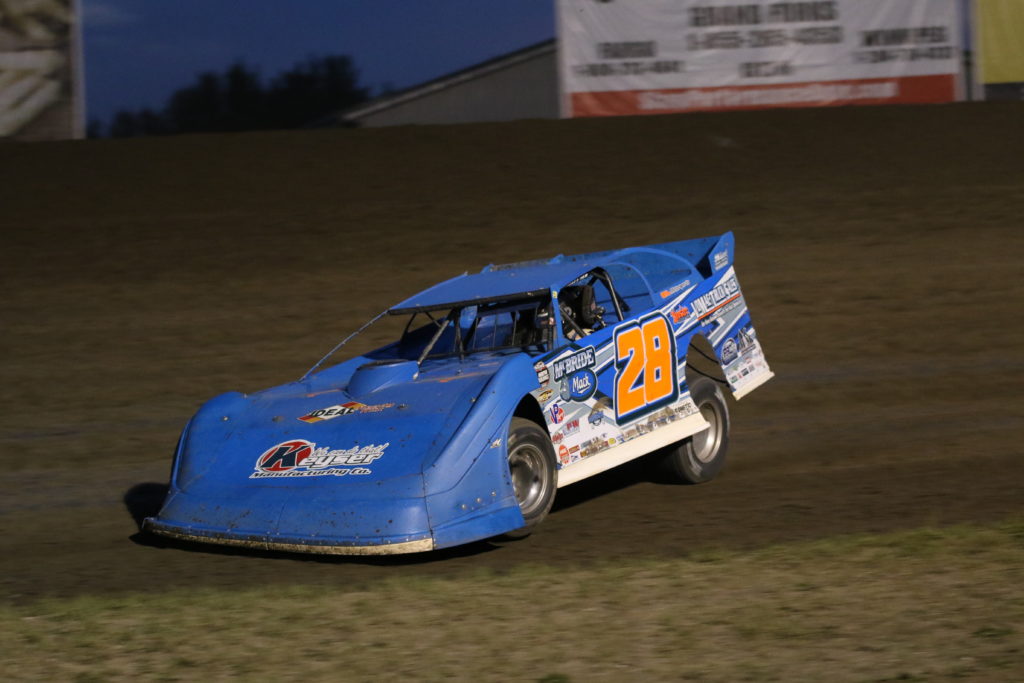 “When they went out and re-worked the racetrack, the bottom was there for a little bit,” Erb said. “The car worked real good tonight and I was really happy with everything, so to get up there and finish third tonight, I’m really pleased with that.”

Erb is coming off of a bit of DIRTcar Summer Nationals tour competition that features a few tracks similar in size and shape to River Cities, the major difference being the amount of banking that River Cities has. Known for his success on the “Hell Tour” as a three-time champion, Erb used a bit of those notes and knowledge to aid his efforts on Friday night.

“This track here fits some of the stuff that we raced on back home, just a little bit more banking to it,” Erb said. “We took some notes from there and put them together for tonight, and it worked out well for us.”

The World of Outlaws are back in action tonight at the Ogilvie Raceway in Ogilvie, Minnesota for another 50-lap, $10,000-to-win showdown. Hot laps are scheduled to go live on DIRTVision at 6:15 p.m. central – catch all of the action with your Late Model Fast Pass!

ONE STEP AWAY: Sheppard wins the Scorcher at Volunteer Speedway