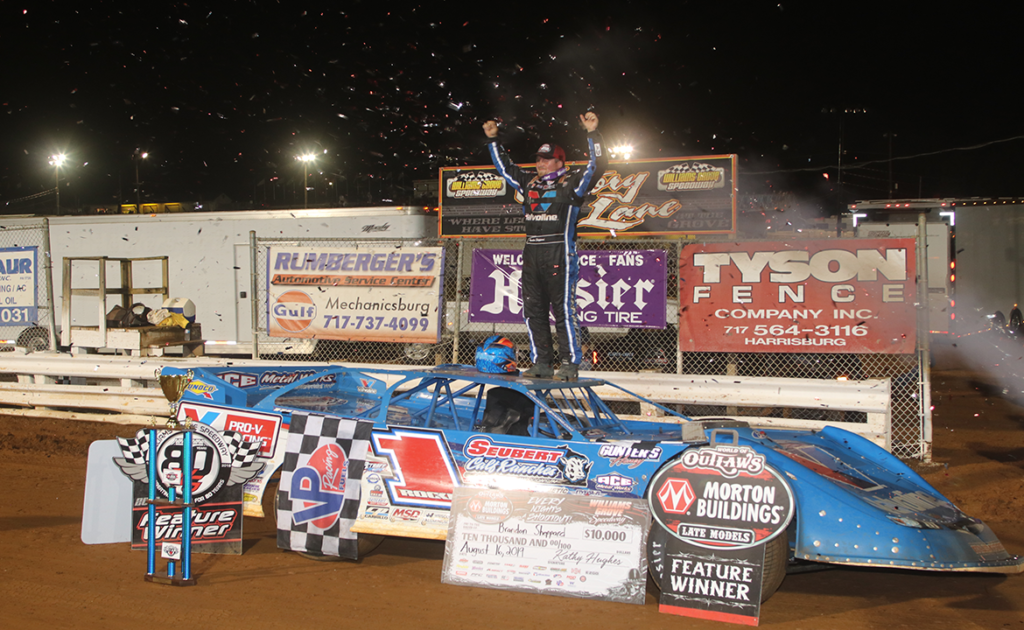 Brandon Sheppard and the Rocket1 warriors have dominated the World of Outlaws Morton Buildings Late Model Series this season, but the tour’s last race on a half-mile track went to two-time DIRTcar Nationals champion Shane Clanton at Shawano Speedway. Flash forward to Friday night and Sheppard got his revenge in the Series’ historic homecoming to half-mile Williams Grove, where the Series’ inaugural race was run in 1988. This time, Sheppard charged to the lead and collected his 16th Morton Buildings Feature win of the year, moving him closer to the all-time single-season win record of 18 victories.

Sheppard has had plenty of dominating performances in the past, but on Friday night, he was downright perfect. Setting PFC Brakes fast time, winning his Drydene Heat Race and redrawing the pole position, “The Rocket Shepp” grabbed the lead on lap one and never relinquished it, leading all 40 laps en route to his 53rd career World of Outlaws Feature win.

“It was phenomenal, the guys had this thing dialed-in from the word ‘go,’” Sheppard said. “We were just fine-tuning on it all night long and it kept getting better and better.”

Before Friday night, Sheppard had never even seen the track from behind the wheel. But as he’s done so many other times this season, “The Rocket Shepp” adapted perfectly to the track’s size and shape, using a bit of pre-race planning before even the drivers meeting was called.

“I walked the track a lot during the day today,” he said. “So I kind-of had an idea of what I was going to do, as far as what lines I was going to run. But I really got a good feel for the racetrack in Hot Laps and took advantage of it. It was a phenomenal night.”

Using the low-middle groove, Sheppard was able to smoothly sort through the waves of lapped traffic and build a sizable cushion between he and those behind him early on before a few cautions re-stacked the field on him. But they were no match for the current point-leader, as the Rocket Chassis house car’s ability to take off on restarts was unparalleled.

To the younger generation, and Sprint Car diehards everywhere, Williams Grove Speedway was a track also featured in a certain respected World of Outlaws Sprint Cars videogame produced in the early 2000s. Sheppard joked earlier on in the evening that “it drives just like the videogame.” But after making several circuits around that same facility in real life, he recalls how realistic it was to him in his childhood and how neat it is to finally visit and race on such a place all these years later.

“It was cool for that game to be in my life when I was a kid. So to come and race at a place that I’ve never been to that was special to me early in my life is pretty cool.”

Behind Sheppard for most of the race was a close chase for the runner-up spot between Clanton and leading Rookie of the Year contender Ricky Weiss. Weiss held the spot and chased Sheppard for the first 25 laps until a restart on lap 26, where Clanton made a brilliant move around the outside to take the spot away at the start/finish line.

“After that second caution, I got beside Ricky going down the straightaway and had him in turn one,” Clanton said. “I just needed to get in front of him. If I could have gotten in front of the #1 car, maybe I could have stayed in the lead.”

From Weiss’ point of view, it seemed to be a difference in tire compound.

“Clanton and Sheppard both had the same tire on and we just had a little bit softer one,” he said. “It fired off early and did its job, but we took a gamble and theirs obviously proved to be better.”

With Clanton’s win at Shawano’s half-mile track last month, the former Series Champion has always had a positive attitude about the bigger facilities and the challenges they present the drivers. In his words, it takes “a good car and a good motor” to have success on configurations like half-miles.

“Clements does a phenomenal job on our motors,” Clanton said. “I like big, fast, half-mile racetracks and it shows in the last two races.”

Normally, “Slick Rick” Weiss sees his helpings of success on dryer, slicker surfaces with longer distances. But with the rain the track received in the hours before the event, a very tacky surface emerged and made for a great place to flex the engine’s muscles. Luckily for Weiss, he and the crew have been improving on just such places.

“We’re better when it slows down,” Weiss said. “But we’re also getting better on these tracks that, in the beginning of the year, we said we dreaded to come to.”

The World of Outlaws are right back in action tonight at the Port Royal Speedway for another 40-lap, $10,000-to-win show, alongside the Weikert’s Livestock 410 Sprint Cars. Hot Laps hit the track on DIRTVision at 6:30 eastern!