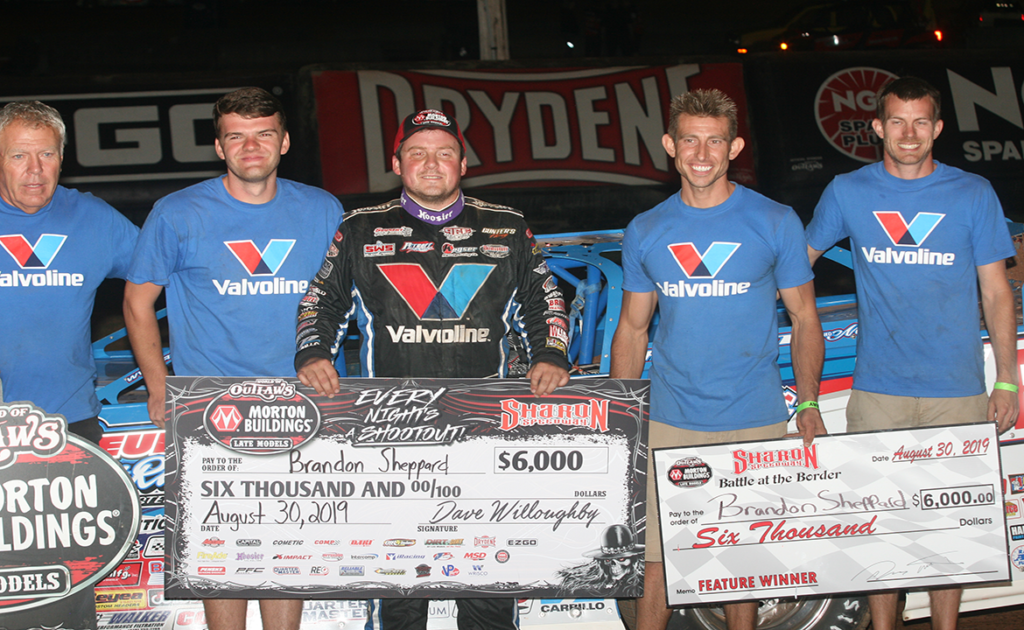 Most drivers to ever compete in at least one race on the World of Outlaws Morton Buildings Late Model Series circuit would agree that it takes an incredible amount of skill and tenacity just to finish inside the top five on any given night, let alone win a single Feature. With his victory at Sharon Speedway on Friday night, Brandon Sheppard has now won 18 of them in 33 tries this year, tying him with his total in 2017 and with four-time Series Champion Josh Richards for the most in a single season.

In one of the most exciting races the tour has seen all year, Sheppard made the winning pass for the lead underneath Ricky Weiss while coming to the white flag en route to the $6,000 payday on night one of Sharon’s inaugural Battle at the Border. Chase Junghans rounded out the podium with his second consecutive top-three finish.

An expertly prepared racing surface gave the World of Outlaws field of 24 a great opportunity to put on a show for the fans in attendance and watching live on DIRTVision, and what a show they got. Three very fast grooves created plenty of room to race, and the leaders made sure to use every bit of it over 25 laps.

“Today was the first time I’ve ever seen this place, and it was fun, a lot of fun to race on,” Junghans said. “When they were packing the track before Hot Laps, I got a look at it and thought ‘this place is going to be fun.’”

“The track was really awesome and we’re glad to be here,” Sheppard said. “It’s one of the better tracks we’ve been on all year, so we’re definitely looking forward to tomorrow night.”

Shane Clanton jumped out to the early lead from the pole and smoothly lead the first 16 laps before encountering a bit of lapped traffic as he tackled the high side of the racetrack. Weiss and Junghans had been side-by-side for second down the backstretch and took their battle underneath Clanton and a lapped car into turn three on lap 17, making it four-wide out of turn four.

Sheppard had been patiently riding in fourth and moved into the frame on the bottom as the leaders came out of turn two on the next lap. He said he wasn’t necessarily biding his time so much as he was just figuring out who was going where ahead of him.

“I was definitely trying to keep an eye out on where those guys were racing, where they were messing up and where the lapped cars were going to go,” Sheppard said. “I kind of got bottled up with a lapped car in turns one and two, so I had to go around him in the middle and go back down to the bottom. At that point, the bottom was where I wanted to be.”

Junghans quickly swapped lanes to the top side and drove it hard into turn three, building up momentum for what might have been the boldest, yet most exciting move for the lead of the night.

With Clanton hugging the wall and Wiess pinned to the bottom lane coming out of turn four, Junghans saw a gap, just wide enough to fit his car into, between the leaders and immediately shot for the middle groove, splitting the two at the line. He was still scored in third on the completion of that lap, but his speed powered him by both into turn one.

“I saw the gap and was like ‘well shoot, I’ve got to go,’” Junghans said about the pass. “So I just shot the gap. We were racing all over that place, slicing and dicing, lapped cars and stuff. It was a lot of fun.”

Junghans held the lead back around to the stripe before Weiss got a good run on the bottom and took it away with five laps remaining. At this point, it seemed as though Weiss may have finally had the right combination to get his first-ever World of Outlaws win. However, the Rocket1 Racing car was right behind him and had yet to show his hand.

“I was pretty content with riding in second and hoping for Ricky to slide up out of the bottom, and fortunately for me, that’s what happened,” Sheppard said.

It didn’t take very long for “The Rocket Shepp” to show the ace up his sleeve, as he gave Weiss a knock on the door for the lead just one circuit later on lap 21. “The Manitoba Missile” held his own on the top side, though, narrowly clipping Sheppard at the line twice through lap 23. But Sheppard was just not going to go away on the bottom.

“I don’t know if we knocked the toe out, but I just couldn’t seem to hold the bottom anymore,” Weiss said. “So, I started floating the middle and Sheppard got me down low. I just kind of Hail Mary-ed it at the end and thought maybe I could get back on the top, but he was just too strong down there.”

Using the lowest lane possible, Sheppard steadily made the winning move under Weiss coming to the white flag and began to open up a gap down the backstretch, sealing the win and his name in the World of Outlaws history books once again.

“Once I got to second and Ricky was leading, he slipped up one time and I was able to get in there and show him my nose, getting close enough to him into turn one that he couldn’t get back down. That’s basically what won the race,” Sheppard said.

Tying his own record of 18 Feature wins in 2017 and Richards’ 18-win season the year prior, Sheppard now stares history in the face on Saturday night at Sharon, as he’ll go for $15,000 over 75 laps and a chance to break the single-season wins record. Hot laps will kick off the racing action at 6:30 p.m. ET, live on DIRTVision!

Through the Lens: Sharon Speedway