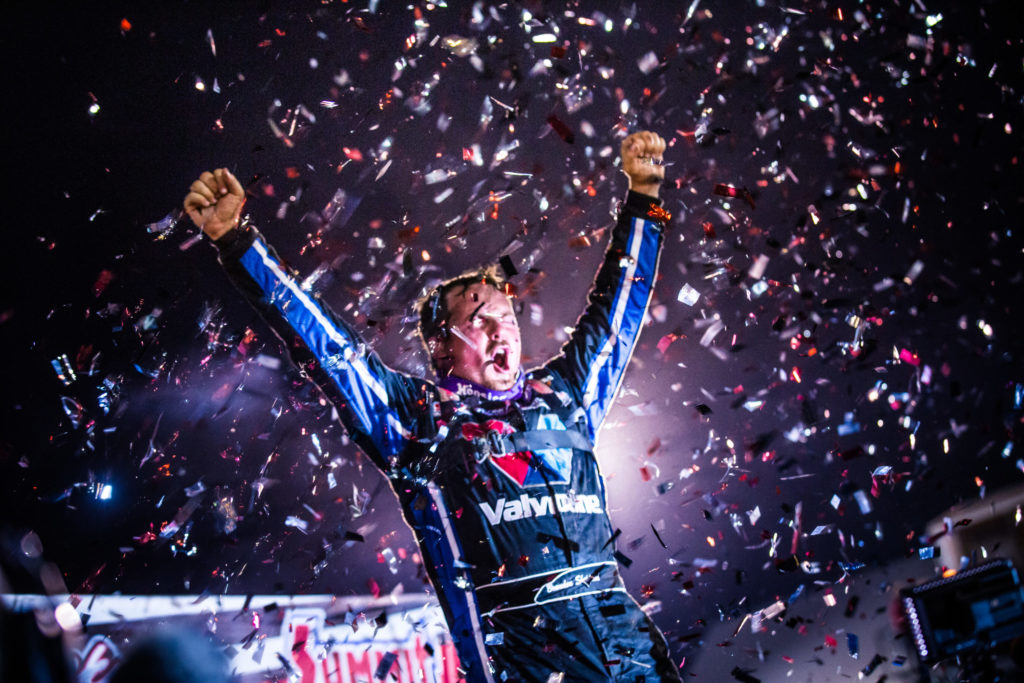 The World of Outlaws Morton Buildings Late Models will compete for their first big payday of the year tonight.

Stepping up to create the Drydene Double Down Invitational, Drydene Performance Products has backed the $20,000-to-win, $1,000-to-start special at Minnesota’s Jackson Motorplex. No fans are permitted to the participant-only event due to COVID-19 regulations, but all can watch from home LIVE on DIRTVision.

Over the last two years, the World of Outlaws Late Models have battled for a payday in excess of $20,000 on seven occasions with five different winners. Brandon Sheppard of New Berlin, IL and Chris Madden of Gray Court, SC, who will both be in action tonight, are the only multi-time winners in that category.

Most recently, Madden banked $50,000 at Cedar Lake Speedway’s “USA Nationals” in August of 2019 with his Scott Bloomquist Racing No. 0M entry. Before that, “Smoky” struck for $30k at Lernerville Speedway’s “Firecracker 100” in the summer of 2018.

For Sheppard, he pulled off a monumental last-lap, last-corner slide job for the win on Bobby Pierce at Fairbury Speedway’s 2019 “Prairie Dirt Classic,” a move that earned him a cool $30,000 check. The year before, it was Sheppard and the Rocket1 Racing, Valvoline No. 1 reigning supreme at the 2018 “USA Nationals” with $50,000 up for grabs.

In January, Cade Dillard of Robeline, LA stepped up with some extra dough on the line and delivered a $15,000 triumph with his first career World of Outlaws Morton Buildings Late Model Series victory at Vado Speedway Park. After an up-and-down night at Jackson on Friday, “Thriller” and crew have the MB Customs No. 97 ready to roll on night two at Jackson Motorplex.

Ricky Weiss, who dominated from start-to-finish on Friday at Jackson, certainly enters the $20,000-to-win finale as a favored contender. Doubting his capability to even cross the border from his Headingley, Manitoba home in Canada, the 31-year old reigning Rookie of the Year eventually made it through to Minnesota and returned with an unstoppable performance. Sporting the Drydene Performance Products colors on his Team Zero Race Car No. 7, Weiss will look to go back-to-back in the Drydene Double Down Invitational tonight and claim the biggest payday of his World of Outlaws career.

Sheppard and Madden, who bring in that experience of competing for and winning premier paydays, both managed top five finishes last night at Jackson. After struggling in qualifying, Sheppard rallied with a 10th-to-2nd feature charge, while Madden bounced around the top five for much of the 30-lapper before finishing in the fifth slot. Shannon Babb was Friday’s quicktime qualifier and completed the feature in third-place, now he’ll set his sights on improving with that $20,000n check on the line.

A full program of Qualifying, Heat Races and Last Chance Showdown will lead into the 60-lap Drydene Double Down Invitational feature that pays $20,000-to-win, $1,000-to-start. Fans can watch the entire program from home on DIRTVision.