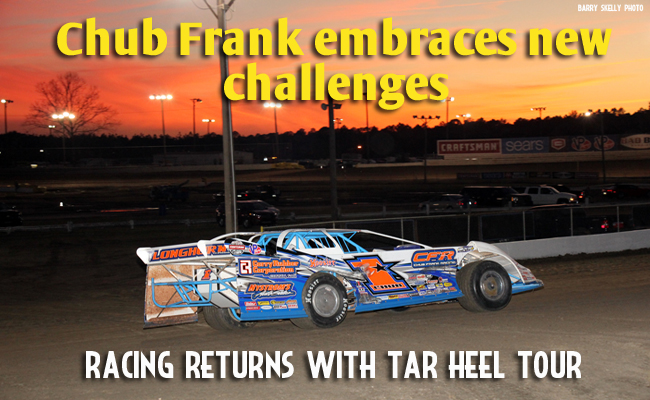 CONCORD, N.C. – April 26, 2016 – Chub Frank, one of the 12 original drivers to sign with the World of Outlaws Craftsman® Late Model Series in 2004, is no stranger to many of the regular series tracks – until this week. Frank will face unpredictability in a first-time trip to Carolina Speedway (April 29) and with the ever-changing track conditions of Fayetteville Motor Speedway (April 30).

Not to say this week will be nearly impossible for the seasoned driver to handle. Frank not only sees this week as an equalizer among the field, but Frank also grew up on a track, grooming Stateline Speedway as early as when he was five-years-old. His father owned the speedway.

“…and I guess my advantage was I started driving cars when I was five,” Frank said. “It taught you a lot of car control then because you were always in the mud. You always knew where the car was going and stuff.”

Nowadays, young guns have the advantage to race before 16 years old; Frank had to wait back then. It paid off: he became dominant at his home tracks, winning the Stateline/Eriez circuit Limited Late Model titles from 1983-87 and capturing the Stateline Super Late Model championship in 1989 and ’90. Frank currently sits ninth all-time in career A-Main victories in series history (16).

“[My dad] didn’t intend me to race, especially to do it as a living,” Frank said. “Nobody ever pushed me into it. We were good right off the bat, and even then I didn’t expect doing this as a career. But it’s competitive.”

Between this week’s curve-balls and the other 15 full time drivers jockeying for a win, Frank is looking for the edge. He did say these tracks are an equalizer, but a level playing field just isn’t enough. Frank is watching past races from Carolina Speedway, documenting all the little nuances that may give him the boost he needs.

“We’ll probably go there standard (ready for anything) like we normally would and then figure out when we get there what we really need to do,” Frank said. “That doesn’t bother me. I enjoy going to new tracks.”

The following night, Frank will be trying for his first victory at Fayetteville Motor Speedway, which entered the World of Outlaws circuit in 2008. Last season, Frank resorted to a backup car because of a previous race, and there was “no getting ahead.”

“That place does throw you a curve,” Frank said. “You never know what you’re going to get. It could be rubbered up…wide open…but I like the track. It’s a fast track. That’s one of the tracks they take good care of and I enjoy racing there.”

Frank is preparing for anything and everything. But even with all this unpredictability looming, he said he knows one thing for sure in his experience with the Outlaws: fans are going to show.

“The races that we go to, they’re standing room only,” Frank said. “So that tells you a lot how our fan-base is, the people who love this series. There’re a lot of die-hard fans in late model and they’ve been around for a while.”

Tickets for the first-ever World of Outlaws Craftsman Late Model Series event at Carolina Speedway will be available at the gate on the day of the event and are $30 for general admission and $40 for the pits. Children ages 6 to 12 are $10.

Gates for the Tarheel100 at Fayetteville Motor Speedway open at 4 p.m., while racing is at 7 p.m. Tickets may be purchased at the door.

ABOUT THE TRACK
CAROLINA SPEEDWAY , also known as “the Action Track,” is a 4/10th-mile clay oval. The track record is 14.784 and was established by Chris Ferguson.

COMING UP NEXT: The World of Outlaws Craftsman® Late Model Series returns to action at Ponderosa Speedway in Junction City, Ky. on Friday, May 6. The series then takes on Smoky Mountain Speedway in Maryville, Tenn. on Saturday, May 7.

2016 STAT ATTACK
There have been 8 World of Outlaws Late Model Series features this season.