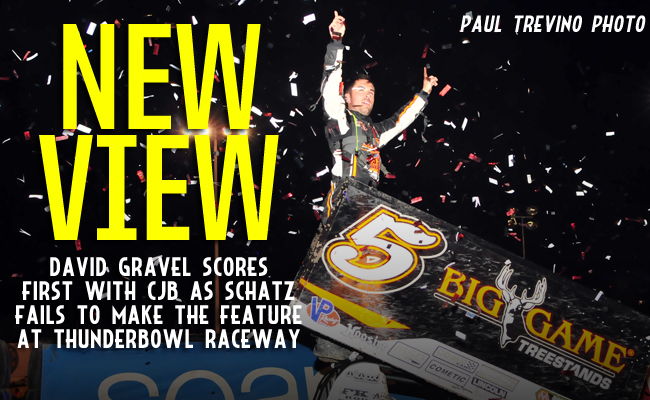 David Gravel Wins at Thunderbowl, Scores First of the Season

The win was the first series win for Gravel since he won the National Open at Williams Grove Speedway in 2014 and the first for him with his new team, CJB Motorsports.

“It’s awesome to win this early in the season,” Gravel said. “Running second last week and now a win is great. The track was narrow but I had to take advantage of our track position. I didn’t want to give up a win there – you never want to give up wins. I tried to be aggressive when I was supposed to be aggressive and be passive when I was supposed to be passive but it worked out.” 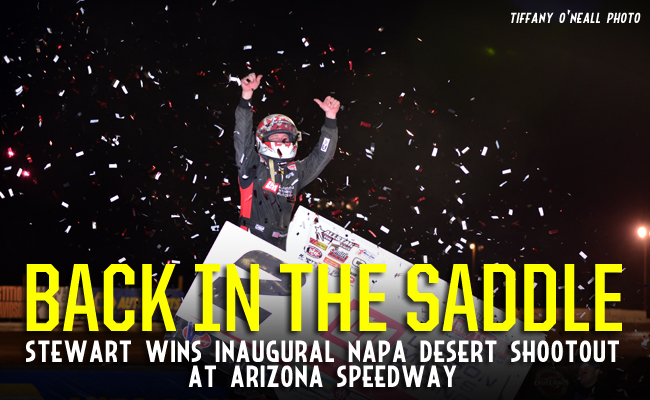 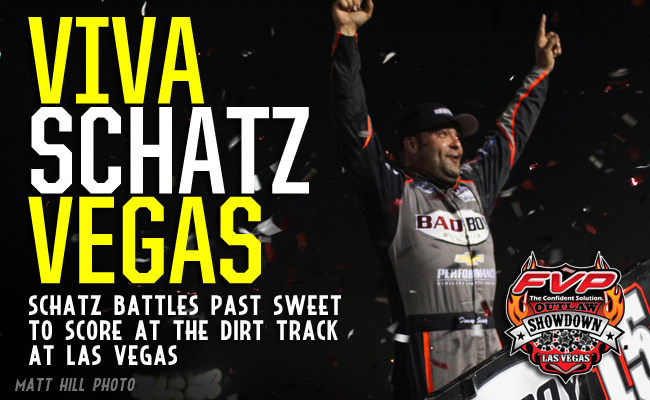 Overcomes slow start for second victory of the season

LAS VEGAS — March 4, 2016 — Donny Schatz fell out of the top five on the initial start of the FVP Outlaw Showdown presented by Dollar Loan Center on Friday night at The Dirt Track at Las Vegas, but he battled his way back to the front and took the lead with four laps remaining to score his second World of Outlaws Craftsman® Sprint Car Series victory of the season. 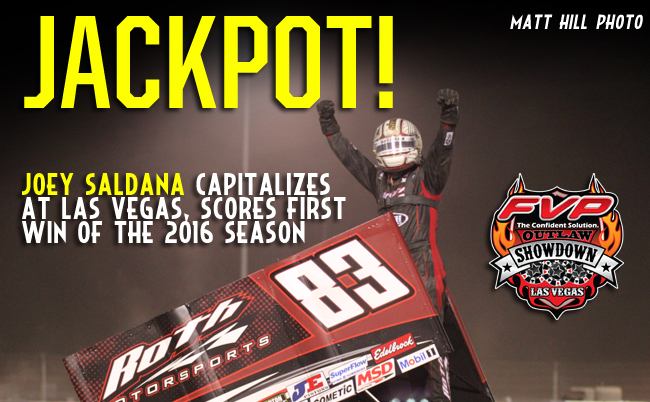 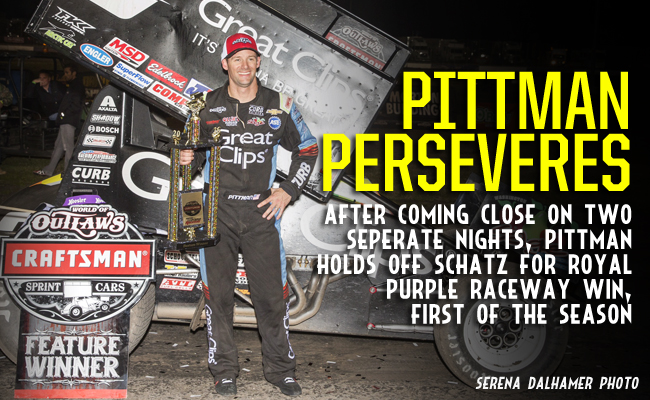 BAYTOWN, Texas — Feb. 27, 2016 — After coming just short the night before, Daryn Pittman was redeemed Saturday night as he scored the O’Reilly Auto Parts presents the World of Outlaws hosted by Kasey Kahne at Royal Purple Raceway Park, his first World of Outlaws Craftsman® Sprint Car Series victory of the season. 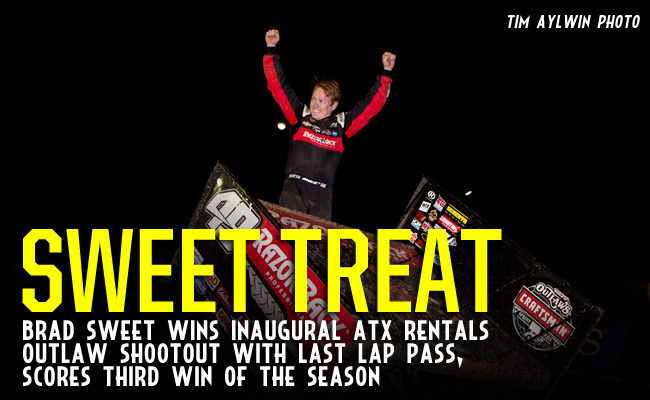 Sweet, who led the series points coming into the night after he piloted his Razorback/Sage Fruit No. 49 to two victories at the 45th Annual DIRTcar Nationals, posted the sixth fastest time in qualifying then finished second in his heat, putting him in the dash.

The Grass Valley, Calif.-native finished fifth in the dash, while Joey Saldana claimed the top spot in his Roth Enterprises/HR Livestock No. 83, putting him on the pole for the feature event. 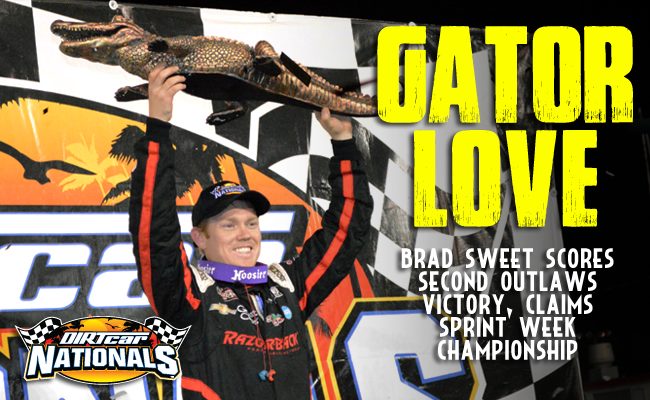 “It’s unbelievable,” Sweet said. “The competition is so stiff that you have to put yourself in position each and every time you’re on the race track and it’s not easy, one mistake and you’re behind the eight ball. Tonight we did pretty much everything right, and luckily the dash draw helped us there because it was going to be a tough track to pass on.”

Sweet, who won the season opening series event at Volusia Speedway Park on Friday night, edged Greg Hodnett, who had been the picture of consistency all week, by just four points to win the ‘Big Gator.’ With Daryn Pittman’s 2015 Sprint Week championship, it is the second year in a row Kasey Kahne Racing with Mike Curb has claimed the ‘Big Gator’ trophy. 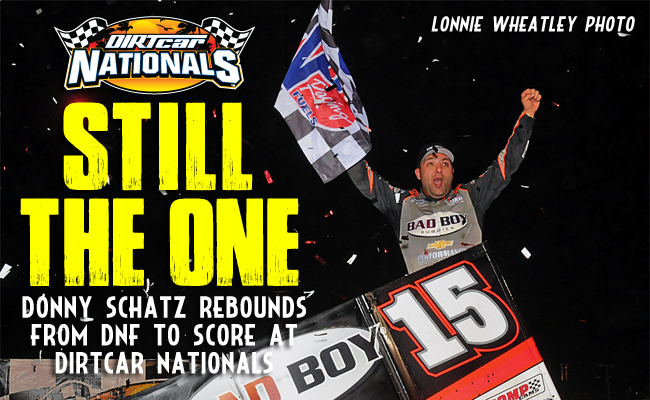 BARBERVILLE, Fla. – Feb. 13, 2016 – One night after his first did-not-finish result since September 2013, Donny Schatz rebounded at DIRTcar Nationals as he battled with Brad Sweet on Saturday night to score his first World of Outlaws Craftsman® Sprint Car Series win of the 2016 season.

“It’s kind of a relief to be over that hill of having that DNF that’s been haunting us for I guess 180 races or whatever,” Schatz said. “Now we can just focus on trying to win races.”

The win is Schatz’s second of DIRTcar Nationals after he won the second All Star Circuit of Champions night. 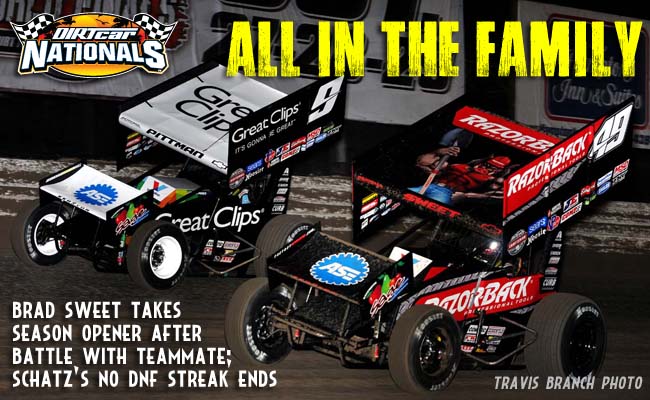 BARBERVILLE, Fla. – Feb. 12, 2016 – In front of one of the largest crowds in DIRTcar Nationals history, Kasey Kahne Racing’s Brad Sweet and Daryn Pittman fought a pitched battle for the season opening World of Outlaws Craftsman® Sprint Car Series feature on Friday night. When the checkered flag fell, it was Sweet who took the win.

“It feels good to win any of these Outlaw races,” Sweet said. “This is my third season, so I understand how grueling these years are and how important it is to start the year off strong. I also know that just because you win tonight doesn’t mean anything for the future. We just have to keep digging and hopefully this is our year to win a lot of races.”

Pittman took the first quick time of the season in his No. 9 Great Clips car as the series implemented a new format. 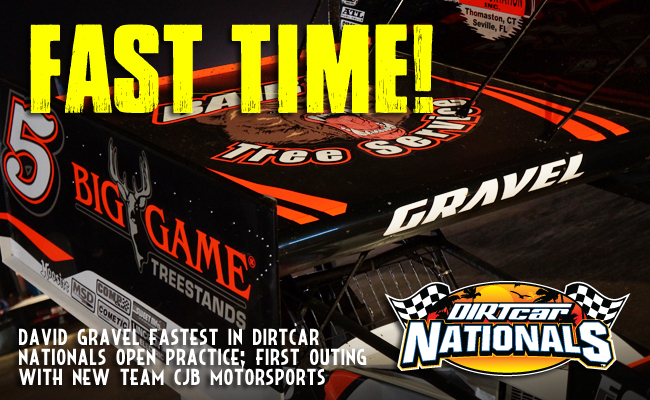 The Connecticut native turned the fast lap of 13.814 seconds during the first hot laps session. It is Gravel’s first outing driving the No. 5 Big Game Treestands car for CJB Motorsports.