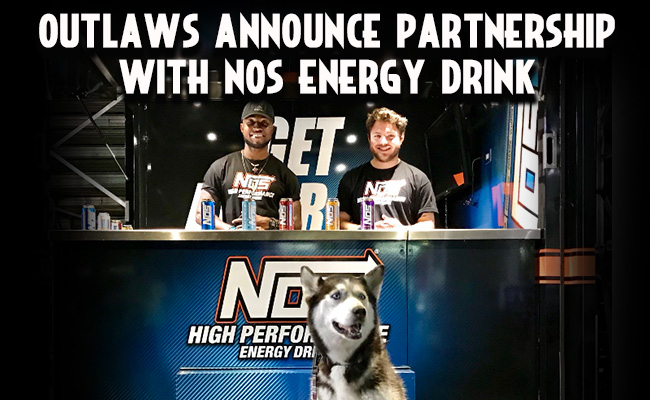 “Our whole company is excited to be involved with the World of Outlaws,” said Lauren Albano, Marketing Director for NOS® Energy. “Dirt racing has shown its strength in popularity and fan loyalty, and it’s a natural fit for the NOS brand.”

NOS® Energy has upheld its commitment to motorsports since its inception, with sponsorships ranging from pavement to drift to off-road. Now the well-known brand joins forces with The Greatest Show on Dirt.

“We’re thrilled to have NOS as a partner with the Series,” said World of Outlaws CMO Ben Geisler. “We run the most grueling schedule in motorsports with over 90 races from coast to coast every year, so our drivers, crews and fans can always use a boost.”

NOS® Energy Drink contains CMPLX6 for high-performance energy and enhanced mental focus for those who want to live like a champion. And the World of Outlaws Craftsman Sprint Car Series drivers definitely want to live like champions. With 91 races at 53 tracks in 24 states during the 2018 season, these teams live life in the fast lane, spending more than 250 days of the year and over 30,000 highway miles on the road from race to race.

In addition to the Series sponsorship, NOS® Energy has signed on as primary sponsor of the No. 17 Stenhouse Jr. Marshall Racing team, with 2017 Rookie of the Year Sheldon Haudenschild at the helm. The NOS Energy team will compete full time with the World of Outlaws Craftsman Sprint Car Series.

Based in Corona, California, NOS is part of the Monster Energy Company, acquired from The Coca-Cola Company in 2015. Launched in 2005, NOS Energy Drink fuels performance by providing high performance energy and enhanced mental focus you need to stay ahead of the pack.  Whether on the track, tuning a favorite car in the garage, or conquering your day, NOS delivers a kick.  Rooted in auto-culture, NOS Energy Drink is a proud partner of Ricky Stenhouse Jr, Kyle Busch and Chris Forsberg.  High Performance Energy. High Performance Athletes. For more information, visit drinknos.com or facebook.com/NOSEnergyDrink.