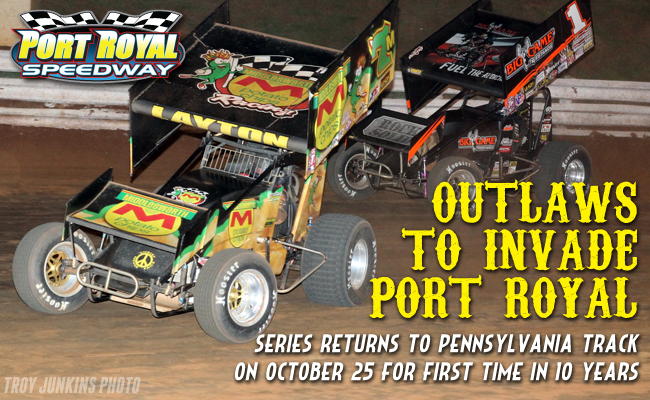 The event at the half-mile dirt oval in central Pennsylvania will be the final World of Outlaws STP Sprint Car Series championship race in the Keystone State for 20-time series champion Steve Kinser during his “Salute to the King” season. The race will be the eighth in World of Outlaws STP Sprint Car Series history at Port Royal, with winners including Donny Schatz (2004), Jason Meyers (2003) Brad Furr (2002), Danny Wood (2001), Doug Wolfgang (1987), Don Kreitz Jr. (1986), and Lynn Paxton (1979).

“We are proud to announce this show as the culmination of years worth of negotiations to bring the best in the sprint car business all back together again at Port Royal Speedway,” says PRS Promotions pointman and Port Royal promoter Steve O’Neal. “Port Royal has the greatest fans anywhere and they’ve really supported us and come back to us over the last three years as we all have worked together to make Port Royal the kind of venue that can now host the World of Outlaws again.”

Tickets are scheduled to go on sale to the public Feb. 4 at www.WorldofOutlaws.com/tickets.

“Some of the most passionate sprint car fans anywhere in the world are in Pennsylvania, so we’re looking forward to bringing the Outlaws back to Port Royal for the first time in 10 years,” said World of Outlaws CEO Brian Carter. “The fans have been asking to see the Outlaws at Port Royal for a long time. We’re very excited to return and expand our schedule in Pennsylvania.”

The World of Outlaws STP Sprint Car Series race at Port Royal Speedway is part of the final Northeast swing of the season that includes the Commonwealth Clash on Saturday, Sept. 20, at Lernerville Speedway; the National Open weekend Oct. 3-4 at Williams Grove Speedway; and the World of Outlaws Showdown on Saturday, Oct. 11, at Rolling Wheels Raceway Park in conjunction with NAPA Auto Parts Super DIRT Week.

The Port Royal event will set the stage for the championship-deciding World Finals Nov. 6-7-8 at The Dirt Track at Charlotte.

The World of Outlaws STP Sprint Car Series kicks off the 2014 season Feb. 14 at Volusia Speedway Park during the DIRTcar Nationals presented by Summit Racing Equipment.

For information about Port Royal Speedway, click www.PortRoyalSpeedway.com. For more on the World of Outlaws, go to www.WorldofOutlaws.com.