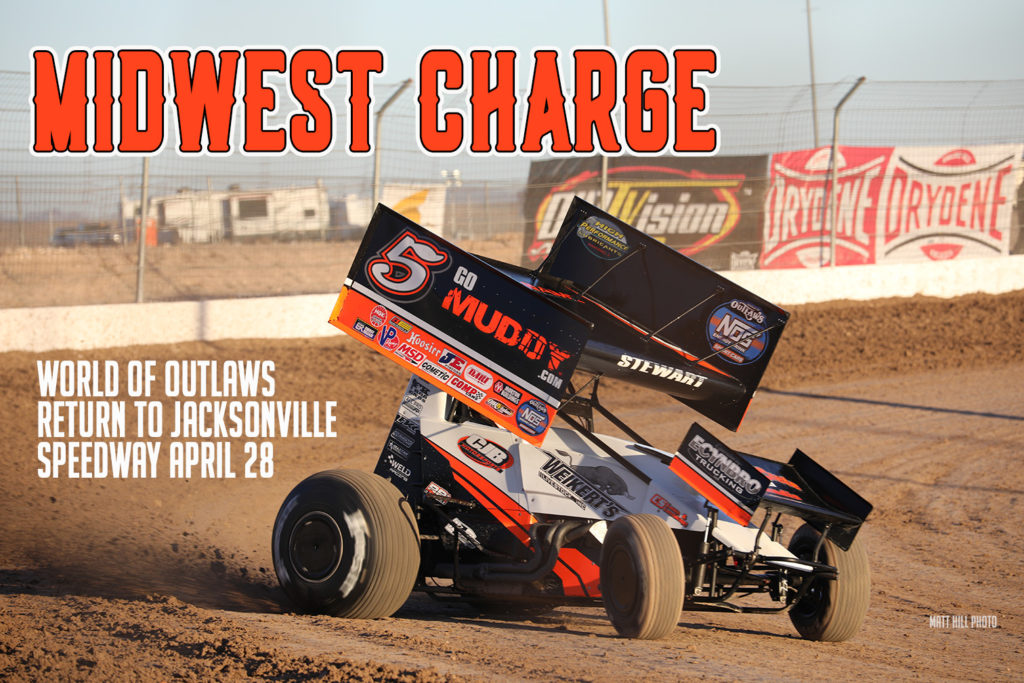 JACKSONVILLE, IL – The World of Outlaws NOS® Energy Drink Sprint Car Series on Sunday, April 28, will return to Jacksonville Speedway for only the third time in history, and the first time since 2016.

In 2014, the Series made its inaugural appearance at the Jacksonville, Ill., track with Christopher Bell winning the first World of Outlaws Feature of his young but storied career. When the World of Outlaws stars returned in 2016, they again showed why they are The Greatest Show on Dirt.

Joey Saldana jumped to the early lead over Aaron Reutzel and Shane Stewart. To hold the lead, Saldana had to be precise every corner. There is no room for error on the quarter-mile track. Saldana found that out a few laps into the race, hitting the cushion and allowing Reutzel by. Shane Stewart also got by Saldana for second.

Saldana looked to have lost the win. He didn’t believe that though. Methodically working his way around the bottom of the speedway, he worked his way back by Stewart and then past Reutzel to reclaim the lead.

Stewart also worked his way by Reutzel and tried to hunt Saldana down, but once Saldana took the lead he ran away with. Brad Sweet also ended up passing Stewart for second. He, too, had nothing for Saldana.

Sweet and Stewart are poised to have strong runs at the track again this year. Sweet is currently in a tight points battle with Daryn Pittman and Donny Schatz. He’s been able to maintain due to a run of three top-fives in-a-row, including two podium finishes.

While Sweet has won a race this season, Stewart is still looking for his first this year with his new CJB Motorsports team. He’s had promising runs this year, in contention to win about three times, but hasn’t been able to close the deal. He’ll be hungry for the win at Jacksonville Speedway.

Following the Series’ visit to Jacksonville Speedway, The Greatest Show on Dirt will make its next stop Friday, May 3, at Riverside International Speedway in West Memphis, Ark.