‘Voice of the Outlaws’ Looks Back on 20 Years 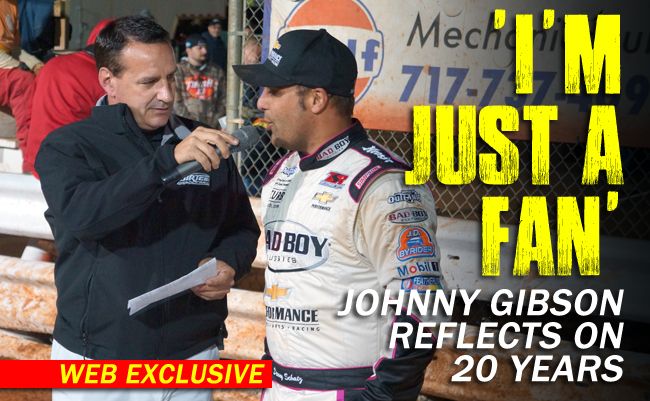 CONCORD, N.C. – Oct. 7, 2015 – On this day 20 years ago, the World of Outlaws Sprint Car Series took on Rolling Wheels Raceway Park. Stevie Smith won that night but what was perhaps most notable about the event was something that went unnoticed at the time. It marked the last event before a new series employee was hired and the last time that employee – now announcer Johnny Gibson – would miss a World of Outlaws event.

The actual number of events Gibson has attended without missing one is closing in on 2,000. It’s a number that is unsurpassed by anyone today and a total tenure with the series that is only rivaled by longtime Series Director Carlton Reimers.

“It went from helping a gentleman named Bill Woodside who worked for the World of Outlaws selling programs to taking over when he quit,” Gibson said. “One thing led to another and here I am 20 years later still with the company.”

In need of an announcer, it was actually Reimers who noticed Gibson’s talent and voice early on and plucked him from his role. With series founder Ted Johnson sold on Gibson, the rest was history.

The year was 1997 and Gibson became the ‘Voice of the Outlaws’ just as a young driver from Fargo, N.D. made his rookie campaign.

“(Donny Schatz’s) first year driving with the Outlaws was my first year as the series announcer so we’ve sort of come up through the ranks together,” Gibson said.

Those memories and moments proliferate through the years for Gibson. Calling drivers’ first wins stick with him as do the special occasions that are meaningful because of the relationships that are formed.

One of those was watching Brad Doty climb back behind the wheel of his No. 18 Coors Light sprint car to pace the field at the 15th Kings Royal – Gibson’s first year as an announcer. It was a moment that was nearly 20 years in the making for Doty.

“You have to understand that growing up, Brad was one of my heroes, he was one of my favorite drivers. Being able to call him a friend at this point, talking to him on the phone, the comraderie of him as a broadcaster and me as an announcer is something very special – it’s something I wouldn’t have dreamed of 25 years ago.”

Those friendships that he has formed over the years add to the events that make up the series schedule. One of his favorites is the Knoxville Nationals, a yearly pilgrimage for thousands of sprint car fans.

“(I like Knoxville), even as much for the racing itself which is obviously a huge part of it, just for the social aspect. All of my friends, literally 90 percent of my friends will be at Knoxville Nationals, I get to see them for a whole week. That’s what makes it special as well.”

Gibson, a lifelong fan of racing, came to the position with the World of Outlaws after spending his younger years pursuing another passion – music.

” I played in a bunch of bands, my favorite of which was one that was called Torn and Frayed. It was a Straight Ahead, Rolling Stones, Black Crows-sounding rock-and-roll band,” Gibson said. “I played, in the late 80s, early 90s, in a glam kind of band, back in the days of spandex and guy-liner and all that kind of fun stuff. I played in a band called Trash Vegas and very briefly in a band called The Zippers. I played in a straight blues band as well. It was a band called James King and the Usual Suspects and that was awesome – in fact that was the last band I was in before I got into racing.”

The passion for music lives on today as a favorite extracurricular activity for Gibson – in fact it played a role in the Pennsylvania-native choosing Minneapolis as his home base. The music scene there, he says, is fantastic.

When he’s not at the racetrack, Gibson is very likely off seeing his favorite band or checking out a new band.

“There is nothing greater than going online and looking at a band’s schedule and finding out dates that they’re appearing and saying hey, we’re off that night, I can go see those guys.”

As for the future of sprint car racing, Gibson is bullish, saying that he thinks 410 sprint car racing is on the upswing and the kind of excitement that he saw in the late 1990s and early 2000s is back.

Twenty years on with the World of Outlaws, Gibson said a lot has changed with the series and with sprint car racing. It’s more of a business now and the competition and technical aspects of the sport continue to evolve and intensify.

What hasn’t changed for Gibson is the passion that keeps the fire going.

“I know I’ve said this so many times before but I am just the luckiest sprint car fan in the world. I’m just a fan,” Gibson said. “The fact that I get to see the best sprint car drivers in the world day-in and day-out ply their craft, that’s what keeps me excited, that’s what keeps me announcing. It’s because I love what I’m seeing out there on the track. Again, I’m a fan – this stuff is cool as hell to me.”

Written with help from Erin Noel.