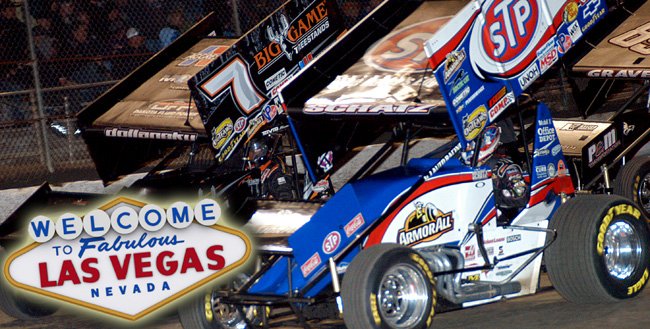 After opening the season next week in Florida, the World of Outlaws Sprint Car Series will kick off an eight-race swing to the West with its lone race in Nevada — March 8 at The Dirt Track at Las Vegas. The premier sprint car tour will spark the racing attention in Las Vegas with an event on a Thursday during the NASCAR Sprint Cup weekend.

NASCAR star Tony Stewart has a pair of drivers — Donny Schatz and Steve Kinser — who have combined for 10 victories in the 26 World of Outlaws events run at the semi-banked, half-mile dirt oval. Kinser and Kasey Kahne Racing’s Joey Saldana earned victories last season when it was a two-night show.

However, the most memorable race in Las Vegas likely came in 2010 when Jason Meyers charged from 18th to make a thrilling last-corner pass on Kinser for a victorious moment that captured the attention of ‘Wind Tunnel with Dave Despain.’

“I got the lead with three laps to go,” he said. “I took the white flag and went to slide a lapped car. I didn’t make it and Steve got a run on me down the backstretch. I was able to turn back underneath him to make the pass off turn four.

“When you come from 18th, you kind of lose track of who’s leading the race. I got to the lead and when Steve got that run on me, I thought, ‘No way am I going to come from the back only to lose this thing.’ The only thing worse than losing a race is coming from 18th to take the lead and then losing it.”

Saldana survived a late surge from Meyers in last year’s opener before Kinser held off a quick Saldana in the closing laps of the finale.

“It was really conducive to good racing,” Meyers said. “It was the same last year with two good grooves of racing. The last couple of years they’ve done a really good job with the track prep.”

For tickets to the Las Vegas race, click LVMS.com.