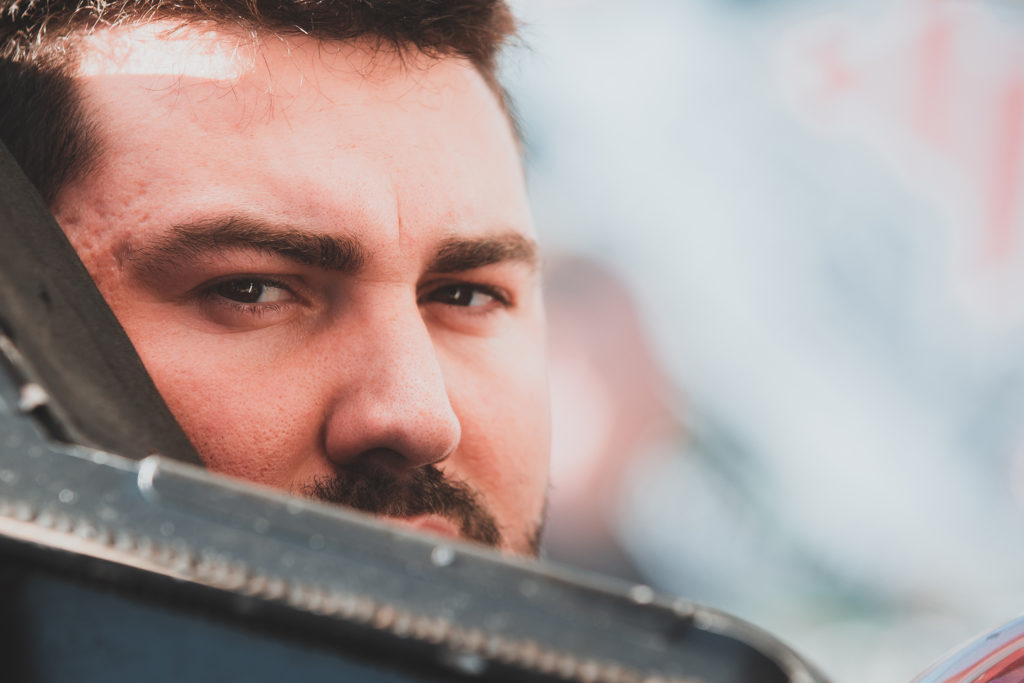 What’s clear to the whole world is a life-changing 18-win season, but what you don’t see is all of the blood, sweat, and tears that Dominic Scelzi has poured into his racing career to reach this point.

Nowadays the 24-year-old Fresno native is a true California local. He spends his week learning the ropes at Scelzi Enterprises and soaks up every minute of being a family man with Nicole, their newborn Stella, and two dogs. On the weekend, he can be found at any number of California facilities from Hanford or Tulare to Chico or Placerville, and most likely winning.

The roots of this wildly successful season, however, are planted in Scelzi’s years he spent committed to traveling to the Midwest and racing against the best of the best – the World of Outlaws NOS Energy Drink Sprint Car Series.

He “got his butt-kicked” for five years on the road,  but the progressions were evident every season. He actually enjoyed being lappers by the leaders, because it was the perfect learning opportunity. In each conversation with stars like Donny Schatz and Brad Sweet, he consumed and remembered every word they offered.

The payoff of those losses in 2016, 2017, 2018, 2019, and 2020 has come to fruition in 2021 amid the greatest season of Scelzi’s career. He’s dominated the local level, but tonight at Hanford’s Keller Auto Speedway he’ll face The Greatest Show on Dirt with hopes of achieving a career-defining victory.

“I want to win an Outlaw race more than I want to breathe.” – Dominic Scelzi

“This year out here on the west coast has been just a phenomenal season for us,” Scelzi said. “I feel like even though I’m not racing with the Outlaws night-in and night-out, this is the best I’ve ever been as a driver and the best we’ve ever been as a team. I truly feel like we have the speed to compete for wins. I hope all of the knowledge and confidence I’ve gained can show. I want to win an Outlaw race more than I want to breathe.”

Set for his 129th career start with the Series tonight at the $21,000-to-win Tom Tarlton Classic, Scelzi’s Outlaw career goes back to 2013 when he first debuted at 16-years-old. The 2015 season became a career-changing year when Scelzi earned his first Outlaw top-10 at Las Vegas, but more importantly found his passion to travel.

“Back in 2015 I ran an NSL race for George & Danny Lasosksi at I-80 and then the Durst family funded a trip to Charlotte,” Scelzi mentioned. “It was an eye-opening experience. I had never been anywhere outside of the west coast to race, so this was like a whole new world. We got our butts kicked obviously, but I learned so much. It changed my mindset to where I wanted to put together a team and go race in the Midwest.”

Over the next five years, Scelzi started 20+ World of Outlaws Features each season and started to produce top-fives. He established his career-best as a third-place finish with podium appearances at Silver Dollar Speedway in 2017 and Black Hills Speedway in 2018.

“I spent May to September on the road with the Outlaws the majority of the time and we would fill in with Knoxville or All-Stars,” Scelzi said on his schedule. “There was a progression every year, 100%. We got better at the simple things and really learned a lot. We made some Dashes, we ran up front, we missed some shows. It was a rollercoaster. Our goal was to get me better and the team better. In that time we won an All-Star race and made the Knoxville Nationals twice, some pretty cool stuff that I’m proud of.”

Fast forward to 2021, and Scelzi credits those years on the road for his wildly successful season in California.

“Every aspect of racing with the Outlaws helps,” Scelzi continued. “There’s not a single guy that wins with the Outlaws that isn’t one of the best in the world. Even the guys that aren’t winning could go to any other Series and be extremely successful. So, i’s the competition for one. Every night you unload you have to absolutely be on your game. You can’t fake it. You can’t miss anything. You have to be 100% from hot laps and if you aren’t, they bring that out of you.”

Often, it was the little things that Scelzi soaked up the most.

“Having guys like Donny to talk to is huge,” Scelzi said on Schatz. “Being able to walk up to him and ask him about track conditions or manipulating the car is something that helped a lot. You might not get a long, drawn-out answer, but you can pull stuff talking to these guys that might spark something in the car.

In a backwards way, he did his most learning in lap traffic.

“I got lapped so much in 2016-17,” Scelzi joked. “I mean, we sucked, but we were getting better and I think lap traffic is why. I was racing with the best of the best without actually being up front. I felt like I was cheating getting those laps. I’d go a lap down and look forward to it because I was behind Donny and Brad, these guys that are incredible, and I would pick up my pace. I learned how to race with them by following them in traffic and just studying every move they made.”

Now, with legendary crew chief Jimmy Carr on the wrenches, Scelzi has more confidence than ever against the Outlaws.

“Being as consistent and as fast as we’ve been this year, plus the confidence I’ve got in Jimmy, I feel like I know how to win now,” Scelzi detailed. “I’ve learned how to put myself in a position to win races, but also how to finish them off now. Before it was like I was on the ragged edge for 30 laps, but now I know how to put myself in position whether we are good or not. We end up finding a way to be there late.”

“Never in my life did I dream of winning 18 races in a year,” he thought on this year. “I’ve got an opportunity to win over 20 now. We’ve won three or four races at Hanford this year, and that’s our main focus right now. I would lose my mind if I beat the Outlaws.”

If you can’t make it to the track, you can watch the west coast swing and all remaining World of Outlaws events live on DIRTVision – either online or through the DIRTVision App.

WHAT TO WATCH FOR: World of Outlaws California Swing Continues at Merced & Ocean

WHAT TO WATCH FOR: Tulare Thunderbowl Kicks Off World of Outlaws West Coast Swing