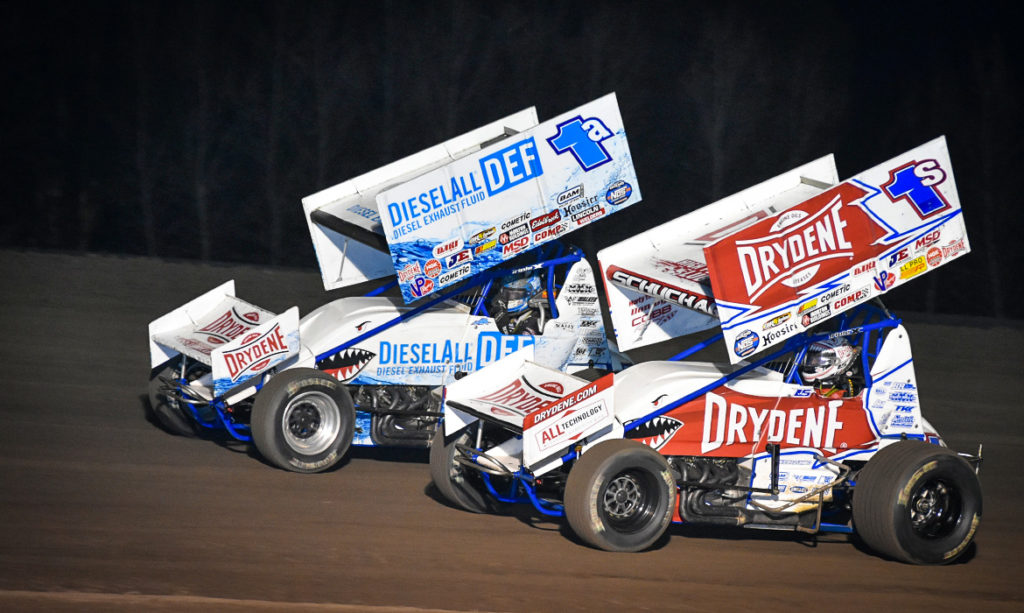 Elevated in an atmosphere of drifting confetti, an exultant Logan Schuchart stood atop his winged chariot throwing his arms in the air. From below his Drydene cladded crew members cheered with the same energy and enthusiasm.

The Shark Racing team had won their fourth World of Outlaws NOS Energy Drink Sprint Car Series race of the year at River Cities Speedway on Friday, June 7 – becoming the winningest team of the year, so far. While the accolade took minutes to celebrate, hours and days of preparation and hard work went into achieving their few minutes of fame.

“It’s a good two full days (of work),” Schuchart said. “Eight hours each day. We usually start at nine or 10 (in the morning) and work until five, six in the afternoon.”

Work for Friday’s race at River Cities Speedway started Wednesday afternoon in the back parking lot of the Grand Forks, N.D. Canad Inns. It was less than 24 hours after the Tuesday night race at Fairbury Speedway in Fairbury, Ill. – about a 12 hour drive to Grand Forks.

The team’s No. 1a and No. 1s cars were rolled out of the trailer to an empty parking and attended to by each car’s three-man crew – including drivers Jacob Allen and Schuchart. Some teams have the budget for a four-man crew of a driver, crew chief, car chief and tire specialist. But for Shark Racing, Allen and Schuchart get their hands just as dirty as the rest of the crew.

Day one of preparation started with a wash. Each car was stripped down, and pressure washed to remove the dirt from the night before. Then, regular maintenance, which continues on through Thursday and the beginning of race day.

“There’s maintenance we’ll do from one race to the next, like over the weekend from a Friday to a Saturday. But usually during the week we’ll do a little more extensive maintenance to the cars,” said Tyler Garber, car chief for Allen.

There’s not an area of the car that doesn’t get touched. Teams will take the top end of the engine a part, clean it and make sure everything, such as the valves, are working properly. Garber said they’ll do an oil change and install new spark plugs, as well.

The rear end will be removed and inspected, and the birdcage greased. The front end receives the same treatment. It’s checked over for bent parts and the hinges are greased.

To keep track of what needs to be done, both Schuchart and Allen have their own check list posted on the inside of the team’s trailer. It lists what needs to be changed and when, how many races each part has on it, when the last oil change was, when the birdcage was greased last and how long the rear end has been in the car.

Along with the car, the team’s trailer needs to be kept clean and organized, too, Garber said.

Some days its simple work. Other days, like the day before the race at River Cities Speedway, it can become complicated. Schuchart said the team found broken valve springs and bent torque tubes.

“Some days are easy, some there’s a lot more going into it,” Schuchart said. “Everybody’s car might be different. But once you race for so long you kind of know your car and what needs more attention than others.”

When the team got to River Cities Speedway Friday morning, their work wasn’t over. Garber said on race day the team will go over all of the nuts and bolts – torquing them to make sure nothing falls off.

The tedious work resulted in Schuchart and his team claiming another win. However, an unknown oil leak plagued Allen’s night at River Cities Speedway, resulting in a 24th-place finish.

The team didn’t have a week to diagnose the issue, though. They were racing the next night at Granite City Speedway in Minnesota – about four and a half hours away from Grand Forks. With the team’s large toter and trailer, the trip is about six hours, according to Schuchart.

By 11:30 a.m. – close to 12 hours after the end of Friday night’s race – the two Shark Racing cars were rolled out of the trailer in the Granite City Speedway pit area. Schuchart’s No. 1s car stayed untouched most of the morning.

“You make sure everything is working the way it needs to,” Schuchart said. “Other than that, it’s changing your set up from track to track and the little things you might change.”

For Allen’s team, they started the morning investigation the No. 1a’s engine. A half hour later, they began the process of removing it from the car. After another 30 minutes, a different engine had been installed. About five hours before the 7:30 p.m. start time, both cars were ready for another night of racing.

“Obviously, you don’t get to go over it as much as you’d like during the week,” he said. “There is a little more of a possibility of something going wrong. That’s why we try to do the best we can during the week to make sure everything is good so we can go two nights without having any issues.”

At the conclusion of the Granite City Speedway race, Schuchart finished third – building on the consistency he is looking for with his team – and Allen rebounded to a 13th-place finish.

“We’re very lucky to have guys that work really hard for us,” Schuchart said. “But when you have new guys that come around, they think this deal is race on the weekend and party during the week and it’s definitely not that way. We get our fair share of fun and get to do some fun stuff and meet a lot of cool people, but there’s a lot of work that goes into these things.

“If we’re not working on them, we’re usually traveling. Sometimes you get where we’re not racing during the week, it might take us two or three days to get ready and then we get a day or two off. That’s definitely nice. Other than that, your days off are driving down the road.”

From Minnesota, they had the five-hour drive to Knoxville Raceway in Knoxville, Iowa for the Friday, June 14, and Saturday, June 15, races at the raceway.

On Monday, in the camping area of Knoxville Raceway’s facility, the No. 1a and No. 1s Shark Racing cars were once again backed out of the trailer for another week of maintenance.