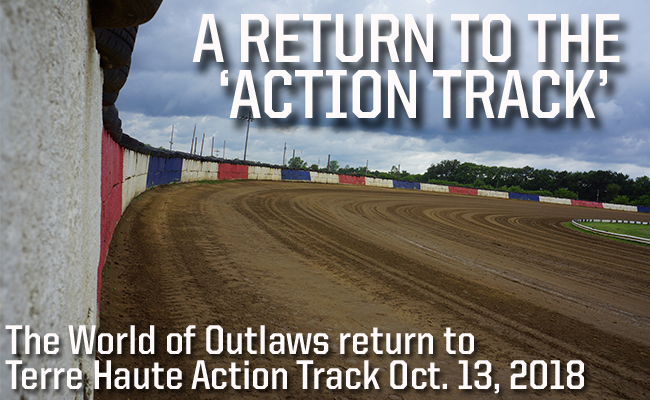 CONCORD, NC – November 9, 2017 – For just the second time in 12 years, the World of Outlaws Craftsman Sprint Car Series will return to the Terre Haute Action Track in 2018. The date is scheduled for Saturday, October 13, 2018. The UMP Modifieds will be the support class for the evening.

The slightly banked ½ mile track located in Indiana most recently hosted The Greatest Show on Dirt in 2014, an event that saw 33 cars sign in for competition with nine-time Series Champion, Donny Schatz taking the victory.

Prior to 2014, the ‘Outlaws’ most recent visit to The Action Track was 2006. “The Outlaws are known worldwide, not just nationwide. We anticipate a lot of fans from multiple hours away coming to see the wicked fast Winged Sprint Cars at a track they haven’t seen them at,” Mackey added.

Stay tuned to woosprint.com and www.TerreHauteActionTrack.net for ticket release information for next October’s event.