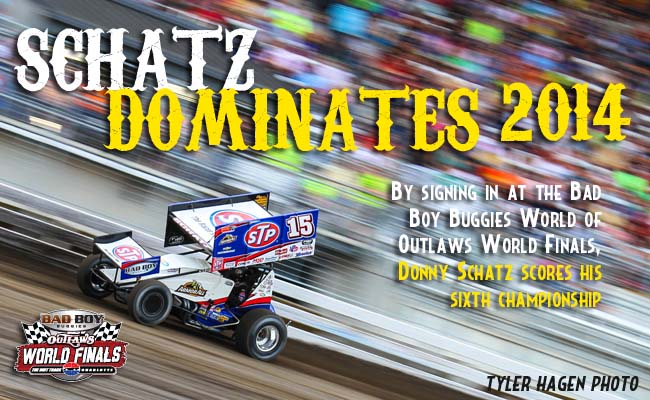 CONCORD, N.C. – Nov. 6, 2014 – After a disappointing end to the previous season, Donny Schatz and his STP Armor All Tony Stewart Racing Team entered 2014 on a mission.

The Fargo, North Dakota native fired the opening shots of the season on the second night at Volusia Speedway Park in February. That night, Schatz charged forward from an 11th place starting position, scoring his first win of the year.

From there, he never looked back.

Where rare bad luck struck Schatz, the STP Armor All team persevered. He led the number of KSE Hard Charger awards received at 13.

Schatz swept through Canada – the first Outlaw driver to ever win all Canadian races in a single season. He took home wins at Autodrome Drummond in Quebec, Cornwall Motor Speedway and Ohsweken Speedway in Ontario and both nights at Castrol Raceway Park in Alberta.

“I love Canada!” Schatz said following his sweep of the Oil City Cup. “We’ve always had great races when we’ve come up here and always enjoyed it.”

At the Knoxville Nationals, it was déjà vu for Schatz and Brian Brown as the two battled for the coveted title for the third straight season. And for a while it looked like the story that played out in prior years would have a different end.

For the eighth time though it was Schatz hoisting the trophy in victory lane.

“It’s unbelievable – it feels so unreal, like it’s not happening,” Schatz said after the win.

Schatz was not done. He won the next event at Junction Motor Speedway in Nebraska and then, beginning at Nodak Speedway, started what would become a six race winning streak. From Aug. 17 to Sept. 1, through two countries and two states, Schatz racked up win after win.

When Shane Stewart ended Schatz’s streak at Willamette Speedway on Sept. 2, Schatz had 20 wins, an 18-race podium streak and a 215-point lead in the championship race.

2014 was a season for the record books for Donny Schatz. The driver broke his single season win record surpassing the previous 23 wins, went on one of the longest win streaks in series history, took home his eighth Knoxville Nationals title and notched his place among the greatest Outlaw drivers of all-time, becoming the third-winningest driver in Outlaws history.

By signing in at The Dirt Track at Charlotte, Schatz scored his sixth World of Outlaws STP Sprint Car Series championship.