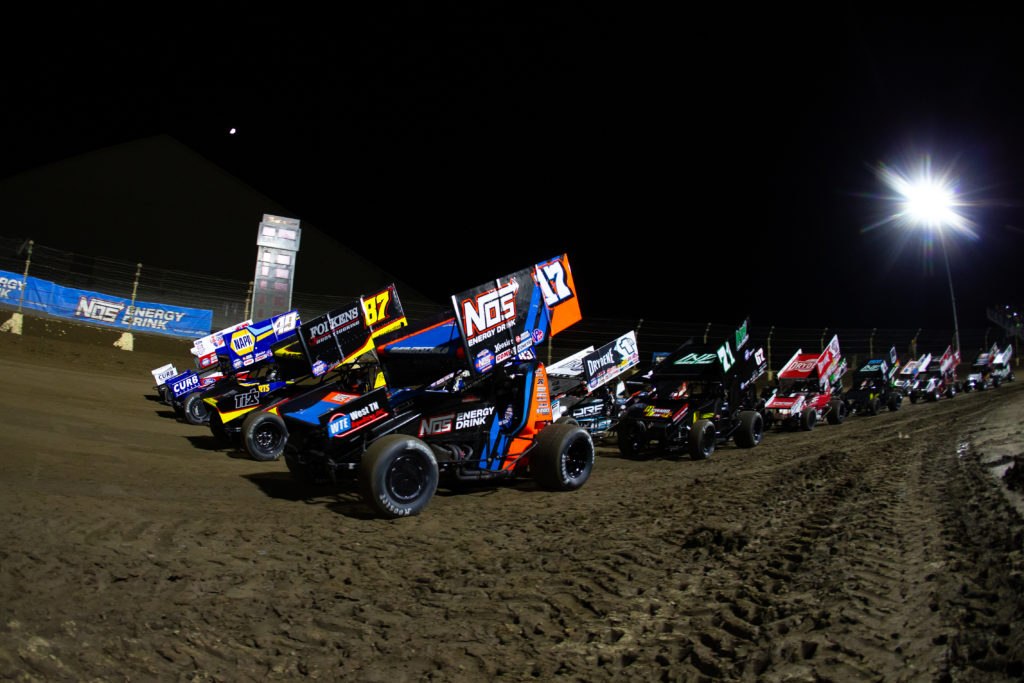 In exactly one month, the superstars of the World of Outlaws NOS Energy Drink Sprint Car Series will be in the midst of a Texas tango.

Returning to Cotton Bowl Speedway on Friday & Saturday, February 26-27, next month’s trip will mark the third and fourth visit in Series history to the Paige, TX 3/8th-mile.

Leading the charge will be native Texan and Rookie of the Year contender, Aaron Reutzel. The Clute, TX 30-year-old is venturing onto the World of Outlaws trail for the first time in his career, which presents him and his Roth Motorsports No. 83 machine with a grueling 90+ race schedule. He’ll have three opportunities to compete in The Lone Star State in 2021, two at Cotton Bowl in February and an April 17 date at Devil’s Bowl in Mesquite.

Reutzel, a three-time titelist with the All Stars Circuit of Champions and former ASCS National Tour top dog, brings the benefit of prior experience on Cotton Bowl’s long straightaways and tight corners. He ran tenth with the World of Outlaws in 2016 and also owns a pair of runner-up finishes at the track in ASCS Gulf South competition.

“It’s always special getting to race so close to home,” Reutzel said. “Having more fans, friends, and family in the stands really ramps up the intensity behind the wheel. You want to go out and perform for them. That’ll be a crucial point in the season for us as a team to get into a rhythm, so hopefully we can get off to a strong start and carry that momentum to Cotton Bowl. It’d be pretty awesome to get a win in Texas!”

Both former World of Outlaws winners at Cotton Bowl will be in attendance next month, looking to become the first multi-time victor at the track.

The Big Cat Brad Sweet won the Series debut at Cotton Bowl in February 2016. He led only one lap, but it was the most important one, and most exciting too. He completed a turn three slide job on his then Kasey Kahne Racing teammate Daryn Pittman to steal the $10,000 victory coming to the checkered flag. Check out race highlights below!

David Gravel, the April 2018 winner, scored his won on a much more technical and choppy Cotton Bowl, but he led all 35 laps along the way. It’s business as usual for Sweet, who chases his third consecutive World of Outlaws championship this year; but for Gravel, it’s about proving a point with big dreams to chase in his new ride aboard the Big Game Motorsports No. 2.

“Man, it’s been a fun years since we’ve been there now,” Gravel noted. “It’s a fun shaped place, though, kind of like a paper clip. Hopefully it just gets slick and wide when we’re there, that puts on some great racing.”

Along with Brock Zearfoss, Carson Macedo, and Mason Daniel, Kokomo, IN’s Parker Price-Miller will be one of four full-time Outlaws visiting Cotton Bowl Speedway for the first time ever.

He doesn’t have the laps that Donny Schatz, Logan Schuchart, or Sheldon Haudenschild have, but he does have DIRTVision. He mentioned he’ll rely heavily on footage of previous races to shorten his learning curve ahead of his debut on February 26-27.

“I’ll definitely watch some DIRTVision to see what I can learn ahead of time,” Price-Miller explained. “It’s hard to go ask guys for advice about tracks, because we all race against each other and you don’t want to give away too much of an advantage. I’ve had a few guys help me out with some good pointers, but at the end of the day you just have to take it upon yourself to adapt and figure the track out.”

This Texas trip will conclude the busiest start to a season in World of Outlaws history. Across four weeks in February, The Greatest Show on Dirt will travel from the DIRTcar Nationals at Florida’s Volusia Speedway Park (Feb. 5-7). through the Dirty South swing at Georgia’s Dixie Speedway (Feb. 12), Alabama’s Talladega Short Track (Feb. 13), Mississippi’s Magnolia Motor Speedway (Feb. 19), and Louisiana’s Revolution Park (Feb. 20), ultimately to Cotton Bowl Speedway in Paige, TX for a doubleheader weekend on Feb. 26-27.