Stockton Prepares for the Outlaws 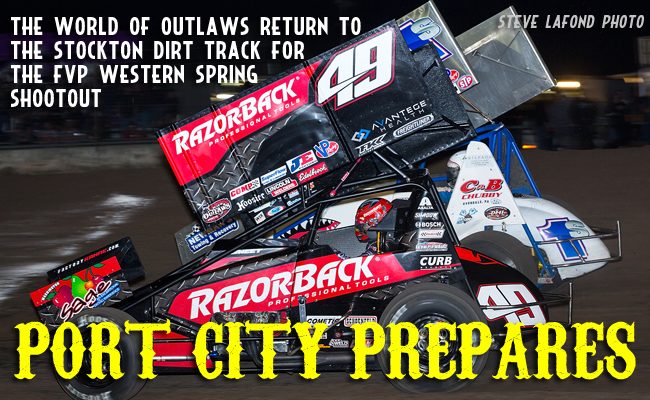 Stockton, CA – Jan. 21, 2016 – If you are a fan of Winged Sprint Car racing the place to be on Friday & Saturday March 18 & 19 is without a doubt the Stockton Dirt Track for the third annual FVP Western Spring Shootout.

Not only will the World of Outlaws Sprint Car Series be on hand for the weekend, but Winged 360 Sprint Cars have also been added to the card each night. The Winged 360’s will run under no sanction, but will follow PMG 360 (Civil War/ Taco Bravo) rules. Each night will pay $3,000-to-win and if a driver ends up winning both nights there is an extra $2,000 double down bonus up for grabs.

The expansion to have both 410’s & 360’s during the weekend continues the trend of the Stockton Dirt Track attempting to form marquee events each season.

“We’re excited to have the Winged 360 Sprints compete alongside the World of Outlaws on March 18 & 19 at the Stockton Dirt Track,” said promoter Tony Noceti. “It really is a Sprint Car lover’s dream weekend and it gets even better when you add in the special show at Delta Speedway on Thursday night. We want to create major events like this and get as many campers to the fairgrounds as we can. Going to the races is so much more than just watching cars go around the track. It’s about friendships, camaraderie, enjoying a cold or hot beverage and having a good time. Our focus here is to continue improving the fan experience and we’re trying to do as much as possible to give everyone the most bang for their buck as we can.”

Last year’s World of Outlaws Sprint Car Series event featured two thrilling nights of racing, with the opener seeing eventual Outlaw champion Donny Schatz come out on top of a photo finish with Shane Stewart. The finale was then captured by California favorite Rico Abreu, who battled his way past Terry McCarl for the popular win.

Two-night adult General Admission tickets for the FVP Western Spring Shootout weekend at the Stockton Dirt Track are available for a great value at just $59 & two-night Reserved Grandstand tickets cost only $69. Single-night tickets & box seats are also available. Children 10 & under are free in G.A. only. To reserve your seats simply visit https://dirtcar.ticketforce.com/eventperformances.asp?evt=195 or call (844) 347-8849.

Camping will also be available during the weekend with a number of great spots for RV’s and Campers on the fairgrounds. To reserve your spot contact 916-370-9417. We will do our best to accommodate everyone as well as we can. There is a two-day minimum for camping at the event with the cost being $33 a night. Friday night following the races there will be a party on the VIP deck of the main grandstand. Drinks & food will be available and everyone is encouraged to attend. The party will be in close proximity to the pit & camping area. There will also be a Saturday morning breakfast held for the second straight year.

Delta Speedway, also located on the Fairgrounds, as noted will be running a special race on Thursday March 17, making it a three-night happening on the property. Plans are to once again have a few special guests compete aboard a Micro Sprint during the night. The Delta Speedway is just a short walk across the parking lot from the camping area behind the grandstands at the Dirt Track.

FVP, a premier producer of high quality original equipment auto products, returns as title sponsor for the spring weekend destination event at the San Joaquin County Fairgrounds facility, where each night will be a separate points-paying race for the World of Outlaws Sprint Car Series. FVP products are engineered to provide their customers with quality products that are equal or superior in performance to the major national brands at a competitive price.

The Stockton Dirt Track is a lightning fast 3/8 mile clay oval and is located on the San Joaquin County Fairgrounds in Stockton, California. It is built inside a one-mile horse track and boasts one of the nicest dirt track facilities in the state. The physical address is 1658 S Airport Way, Stockton, CA 95206. For information on the speedway visit http://www.stocktondirttrack.com

Info on the World of Outlaws can be viewed at http://www.woosprint.com