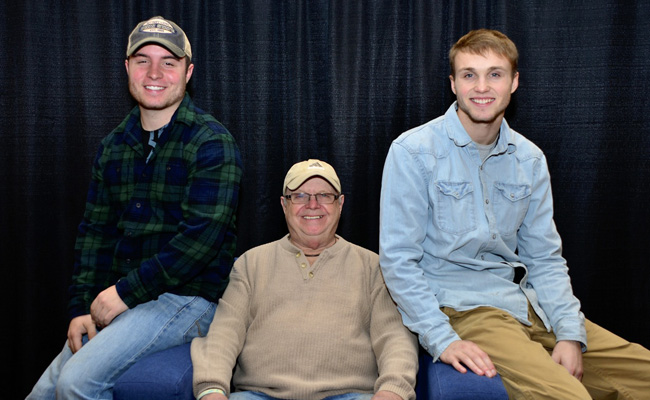 HANOVER, Pa., Dec. 15 — Bobby Allen, one of the original outlaws, will bring two young guns on the World of Outlaws trail in 2014.

Allen, a member of the National Sprint Car Hall of Fame and the owner of Shark Racing, will field sprint cars for his grandson, Logan Schuchart, and his son, Jacob Allen, in the World of Outlaws (WoO) STP Sprint Car Series, which features 92 race nights at 52 different tracks in 24 states and three Canadian provinces. The premier traveling sprint car circuit in the nation, it sanctions the prestigious Knoxville Nationals in Knoxville, Iowa, which Bobby Allen won in 1990.

Shark Racing is based in Hanover, Pa. Schuchart (pronounced SHU-hart) was born in York, Pa. and he’s a graduate of Spring Grove High School in Spring Grove, Pa. Jacob Allen was born in Indianapolis and he is a graduate of Brownsburg High School in Brownsburg, Ind., but he moved to Hanover, Pa. about three years ago and currently resides there too.

Schuchart, who turns 21 tomorrow (Dec. 16), and Jacob Allen, 19, are both members of the Pennsylvania Posse. That’s the name given to sprint car drivers based in Pennsylvania, a hotbed for sprint car racing. They have run selected WoO events in the past, and they’re both looking forward to life on the road in 2014.

Both young drivers will be behind the wheel of Shark chassis using engines prepared by Don Ott.

Schuchart’s #1s is sponsored by Your Auto Source, Fogle & Sons, Newman’s Towing & Recovery and CnB Mushroom Farms. Jacob Allen’s #1a is sponsored by those four companies too, as well as Brenneman Painting, Marty Thompson and Mark Pell.

Shark Racing is trying to raise funds to help with the expenses the team will face with the increased travelling it will do in 2014 on the WoO circuit.  The need is especially great at the beginning of the season, as the series doesn’t pay registered drivers tow money until they compete in the first five races of the year.  The series starts Feb. 14-16 at Volusia Speedway Park in Barberville, Fla., where the car counts are usually fairly high since not many other sprint car races are being held at that time due to winter weather. The series then travels west to Nevada, Arizona and California. In past years there have several rainouts during the California swing, which could pose a big problem. Being far away from home and watching it rain without a paycheck can put a sprint car driver’s season into the red very quickly.

Shark Racing is reaching out to its fans and potential new fans to try to raise enough funds to get its season off to a good start.  The team would also like to partner with companies that would benefit from the advertising exposure they’ll generate throughout the nation all year.

Tickets are already on sale for the fifth annual “Shark Racing Sponsor/Fan Appreciation Night” at the Cross Keys Inn Banquet Hall, 6110 York Road in New Oxford, Pa. from 5 p.m. to 11 p.m. on Saturday, Jan. 25. A $25 ticket includes food, beer, drinks, live entertainment and access to an auction of racing items.  Guests must be 21 to partake of alcoholic beverages.

Tickets can be purchased on-line through PayPal; e-mail Michael Newman at [email protected] for more information.  Tickets can also be purchased at Newman’s Food Mart and Shell Station, 403 Broadway St. in Hanover, Pa., or at the Speedway 94 go-kart facility at 1724 Hanover St., Hanover, Pa. The event is always a sell out.

Dana Allen, Schuchart’s mother, will have T-shirts for sale featuring both drivers on Schuchart’s Web site at Shark1s.com soon.

Fans or companies that can’t attend the Fan/Sponsor Appreciation Night or aren’t in the market for T-shirts can make a donation directly to the team through PayPal via Dana Allen’s e-mail address of [email protected].

And then there’s “Dirt: The Game,” a sprint car racing board game designed and marketed by Bobby Allen’s nephew, Eric Allen. A portion of the proceeds from each game sold goes to Shark Racing.  The game came out in August and it’s been so popular that it’s currently sold out on line at dirt-thegame.com, but both the sprint and late model versions will be available again at the beginning of January. A version featuring modifieds will debut in March.  In addition to the Web site there’s a Facebook page for more information at “Dirt The Game.”

Christmas shoppers can also help Shark Racing through a purchase of Silpada Designs jewelry at mysilpada.com. Lisa Alwin is allocating a percentage of sales to the team; there’s a line at the top of the Web site to click to make sure Shark Racing gets credit for the sale.

Starting Jan. 6 fans can also vote for Shark Racing’s entry in a program being conducted on line at AlwaysAChampion.com.  Champion Spark Plugs uses the contest to give away $125,000 in racing sponsorships. After registering to vote, all fans need to do is click on Jacob Allen’s entry, which is titled “Knoxville Nationals 2013.”

When asked about his thoughts on the upcoming season, Jacob Allen said “What sprint car driver wouldn’t want to run with the World of Outlaws? I am very lucky and blessed to have such an opportunity! I can’t thank my sponsors, my fans and my family enough for all that they do.

“I can’t wait to meet so many great people, compete with the greatest sprint car drivers in the country, and learn from them all. They are my competitors but really they are helping me learn, grow, and achieve my dream of becoming a full-time racer.”

“It’s been my dream since I was a little kid to be like my grandfather, Bobby Allen, and just race against the outlaws, let alone be an outlaw,” said Schuchart.  “We have a lot of great people making this happen — family, friends, sponsors and our fans — we couldn’t do it without anyone.

“I look forward to going on the road in 2014; seeing all the tracks; learning more of what it takes to be successful as a team and a driver, and experiencing all the challenges the tour has to offer,” Schuchart added.

“Someway, somehow I plan to do this all,” Bobby Allen said. “It’s kind of like the story of David and Goliath, but none of this would be possible without my sponsors, my fans, my family and…. a little bit of luck!”