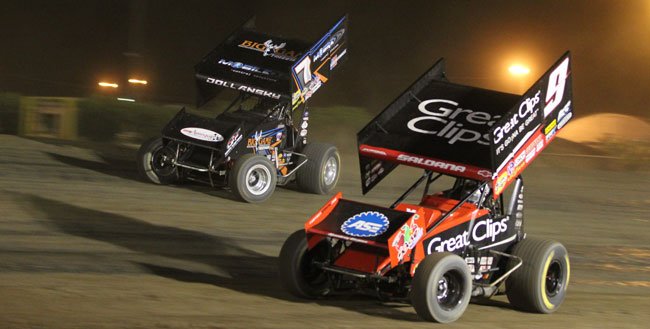 World of Outlaws Spring Classic Right Around the Corner

Saldana, Kinser parallel Pevely with tracks they grew up on

PEVELY, Mo. — April 4, 2012 — A couple of Indiana natives draw a similarity between the tracks where they grew up racing and Federated Auto Parts Raceway at I-55, where the World of Outlaws compete on April 14 in the Spring Classic.

Joey Saldana and Kraig Kinser both cut their teeth at high-banked, short tracks, which is the setup for the lightning-quick track in Pevely.

“Pevely is a great race track,” Saldana said. “It always seems to put on a good show. It’s just a cool, little bullring. You just have to hustle your car and stay after it.

“When I was growing up racing, Bloomington, Ind., was a place we ran every Friday night. It’s pretty similar to that. So maybe my background in racing was short tracks and it just seems to be a pretty fun race track to race and everything that I do racing-wise seems to apply at that race track.”

April 14 will be the first of two World of Outlaws’ events this season at Federated Auto Parts Raceway at I-55, which has featured 20 different winners in 35 Outlaws races. The other event is the Federated Auto Parts Ironman 55 – the only 55-lap race on the schedule – on Aug. 4.

Brad Doty won the first World of Outlaws feature in 1987 and Craig Dollansky claimed last season’s lone event at Federated Auto Parts Raceway at I-55. Dollansky, along with Saldana, Steve Kinser, Jac Haudenschild and Sammy Swindell have each won at least three main events there with Kinser taking a record four victories.

Kraig Kinser picked up his only win at the track in 2005.

“It’s close-quarter racing,” he said. “You’ve got a wall on the inside, a wall on the outside and 24 cars going around a short track. You always seem to be around cars there.”

Veteran Donny Schatz has experienced the highs and lows at Federated Auto Parts Raceway at I-55, including a victory in 2006.

“It’s a fun place to go,” Schatz said. “Anything can happen there. It’s a place you can come from the back to the front, the guys in the front can go back pretty quick. You’ve got to have your car just right there and you’ve got to get up on the fence, so it’s a very fun place to go.”

WHAT TO WATCH FOR: World of Outlaws swing through the Badger State