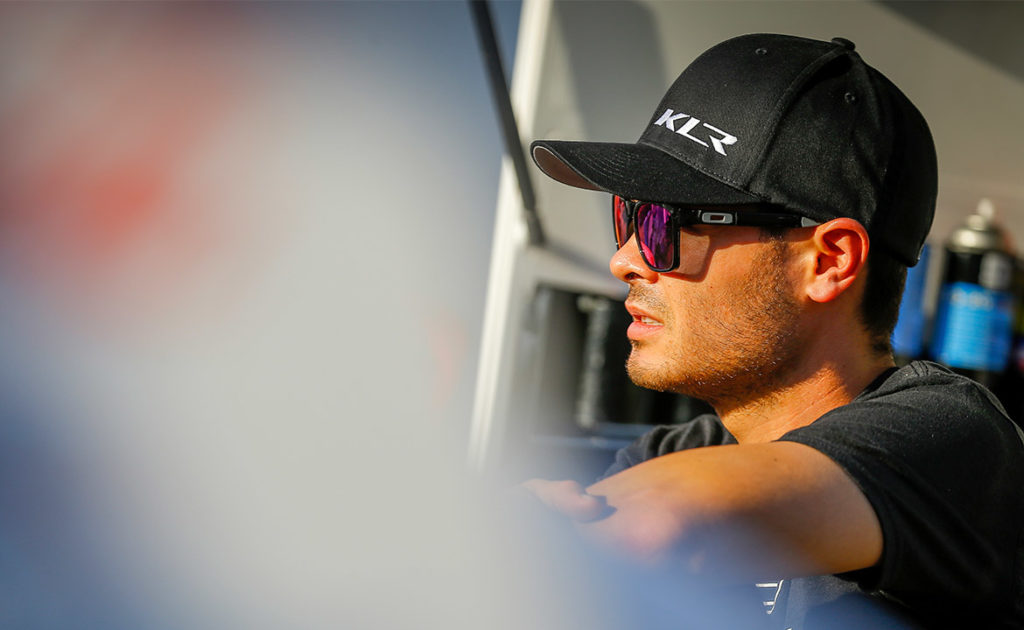 The crowd of fans at Federated Auto Parts Raceway erupted in applause when Kyle Larson completed his qualifying lap.

Johnny Gibson pegged the redline of his vocal cords announcing Larson set a new track record with a 9.995 sec. lap around the 1/3-mile track – the first sub-10 second lap at the bullring for the World of Outlaws NOS Energy Drink Sprint Car Series.

A second wave of applauses then echoed around the facility. Social media became a source of love and astonishment toward Larson for a minute or so after.

Back at his hauler, Larson shed tears.

Tears of joy. Tears of relief. Tears that reflected a “crazy and rough” month and a half.

A derogatory comment made by Larson during an online racing event cost him much of what he built in NASCAR. He’s since acknowledged his mistake and apologized, and now, after losing a top ride in motorsports, the Elk Grove, CA driver is finding a hint of peace again in his dirt racing roots.

“It’s definitely something I love,” Larson said about Sprint Car racing. “I really just love racing cars in general. I’m just happy I can still get out here and have some fun and be around my close friends.”

Along with the support of his fans, sponsors, friends and family, Larson gave a lot of credit to crew chief and car owner Paul Silva for allowing him to continue to drive his #57 car. 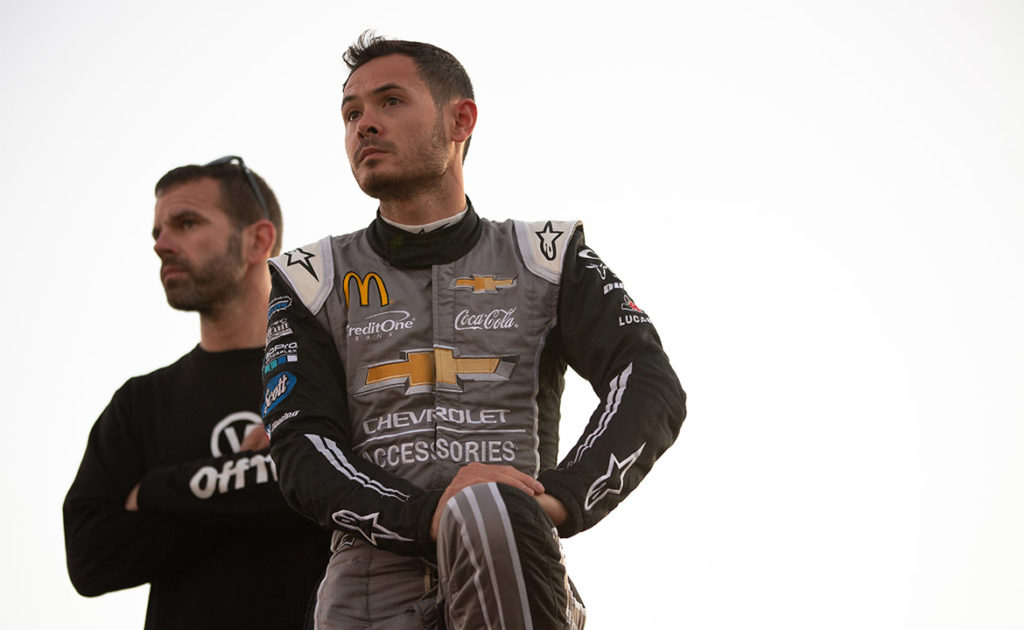 “I’ve been racing with Paul for a long time,” he said. “I think since 2012. It’s nice to have him, as well as all of his supporters, still behind me, and be out here still able to race for a living still.”

In his second start at I-55 during the Drydene Double Down Invitational finale, Larson earned an emotional win – his first since losing his NASCAR ride and ninth with the World of Outlaws. The night before he set the new track record. Both accomplishments hold significant meaning to Larson, who is cherishing any victory – big or small.

“I’ll be honest, I’m thankful that everyone was in the infield because I was back here (at the hauler) by myself choked up and tears in my eyes,” Larson said about his reaction to setting the track record. It’s just been a crazy, rough handful of weeks. So, any small accomplishment like that means a lot.”

Larson received thousands of congratulatory comments on his accomplishments from fans and drivers, including brother-in-law and reigning Series champion Brad Sweet who called Larson an “unbelievable talent.”

“I know he needed that,” Sweet said after Larson’s win. “Happy for him.”

His 2020 Sprint Car season hadn’t been going as planned, even before the mistake. In the three World of Outlaws season opening races at Volusia Speedway Park, Larson was unable to start the first due to an issue, finished 23rd the next night and then 16th the final night. He found some momentum at Knoxville with a 18th to 10th run. Then, I-55 was a turning point for he and the Silva Motorsports team.

Silva had been working on the #57 car out of the Tony Stewart/Curb-Agajanian Racing shop in Indiana, studying notes and scaling the car. That time and accessibility was key to helping find the speed in the car, again, Larson said. 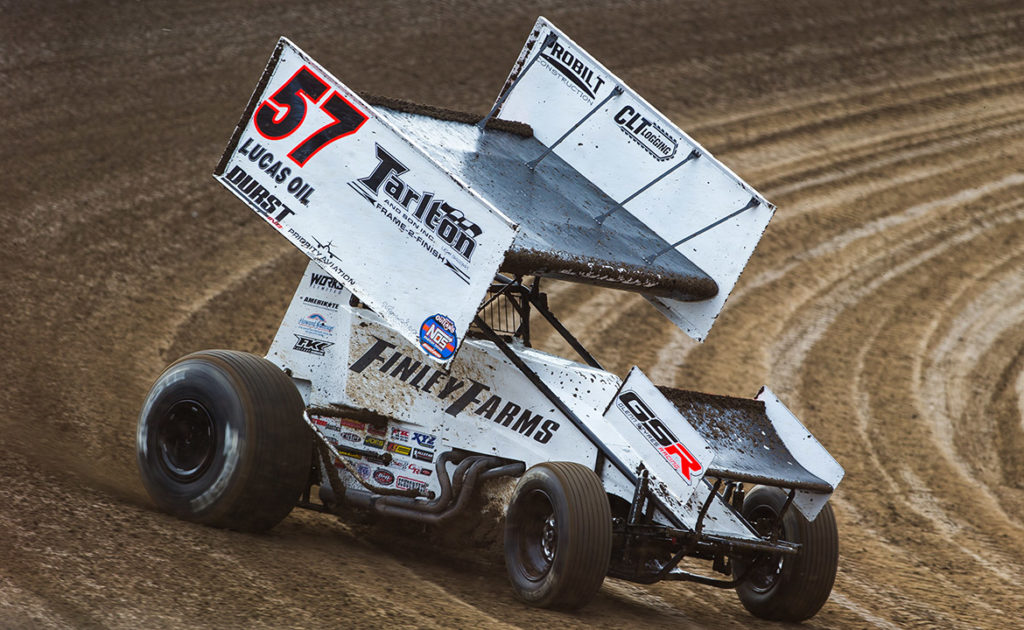 “Just really proud of Paul (Silva) and everyone who helps out on his team,” an elated Larson said after winning at I-55. “Everyone who has stuck behind us after my mistake there. It means a lot. I’m having a blast. Trying to have as much fun as I can anyways. Trying to keep my mind off things. To turn it around here now, it gives us confidence for sure.”

He also entered the weekend with an eased mind. He, his wife and kids made their first long road trip together to the Missouri track – fun family time, Larson said. Their finding time for more of that this week by spending time with Clint Bowyer and his family in Lake Ozark, Larson said, before the World of Outlaws’ May 29-30 doubleheader at Lake Ozark Speedway, which he will also compete in.

Other than running as many Sprint Car races as he can, Larson said he doesn’t have a solid racing plan for the year. And added no one really does with the COVID-19 situation, though. He’ll pick and choose the races that make the most sense to him. He knows several of them will be with the World of Outlaws, though.

“I love racing with the World of Outlaws,” said Larson, who has owned a World of Outlaws team since 2013. “They’ve stuck behind me too throughout this. That means a lot. I always want to support them, especially with them sticking behind me.

“I can’t wait to get my journey started and see where my future goes.”

Fans can catch all of the action from the World of Outlaws May 29-30 doubleheader at Lake Ozark Speedway LIVE on DIRTVision. Tickets for the event can also be purchased by clicking here.

. @dirtvision REPLAY: For the first time in his career at @I55Raceway, and the first time this season, @KyleLarsonRacin heads to victory lane and up on top of the wing! #LiveNOS pic.twitter.com/VsD0nB8ZCZ