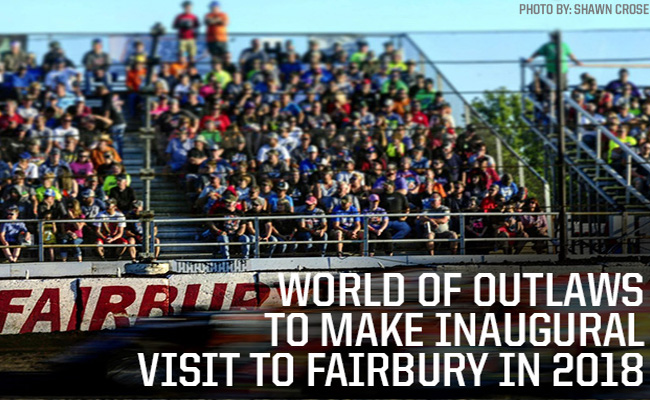 CONCORD, NC – November 14, 2017 – After a successful half-decade of Fairbury American Legion Speedway (FALS) hosting the World of Outlaws Craftsman® Late Model Series, The Greatest Show on Dirt will make its first ever visit to the ¼ mile semi-banked dirt oval on Wednesday May 30, 2018.

“We have wanted to bring the World of Outlaws Craftsman Sprint Cars to FALS for a long-time now. FALS has had a ton of success with the Late Models and what better way to add excitement then by bringing in The Greatest Show on Dirt,” FALS Race Director Matt Curl said.

Fairbury American Legion Speedway ran two 410-Winged Sprint Car races in 2017, both co-hosted by the Interstate Racing Association (IRA) and Midwest Open Wheel Association (MOWA). The most recent coming on October 7, which saw Carson Macedo pass Joey Saldana on the last lap for the victory in thrilling fashion. “The racing was phenomenal this year with the winged cars and we are looking forward to providing a similar racing surface for the highest caliber drivers in the country,” Curl added.

“Our fans put faith in us to provide them with a great on-track product. We’ll have the track right and let the best drivers and teams in the business put on a show. The Outlaws are the best in the country and we are really looking forward to it,” Curl explained.

With FALS being in the heart of Central Illinois and the Midwest racing scene, a strong regional sprint car count is expected to compete with The Greatest Show on Dirt.

This can’t miss event is scheduled for Wednesday, May 30, 2018. The support class will be announced at a later date. Ticketing information will be released in the near future; be sure to stay tuned to FairburySpeedway.com as well as woosprint.com for that information as it comes out.