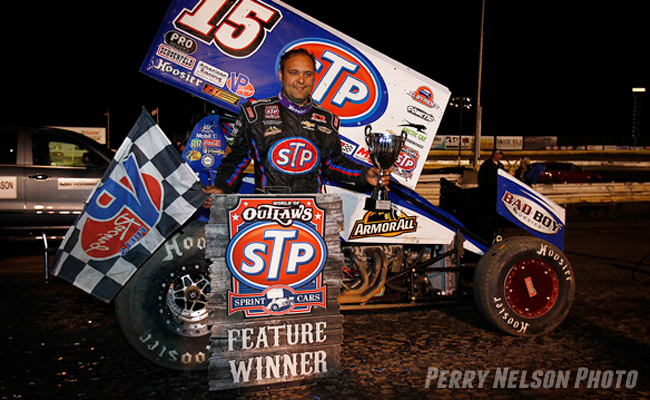 Schatz, who crashed hard during a hot lap session at the beginning of the night, was forced to race a backup car, which he qualified in a position that put him on the front row of a heat race and the perfect position for the dash inversion that helped him secure a front row starting spot for the 30-lap A-main alongside Friday night’s winner Kerry Madsen.

For the second night in a row, Madsen started from the pole and led the most laps, but Schatz was relentless in his pursuit of the Aussie, often going wheel-to-wheel before finally making a pass for the lead on lap 24 only to have Brad Sweet charge past Madsen then Schatz to lead lap 28 before Schatz went back to the front for the final two laps and his 17th victory of the season and the 141st win of his career.

Sweet came back at Schatz again but settled for second with Madsen in third. Joey Saldana was an early contender but finished fourth as championship points leader Daryn Pittman rounded out the top five and now has a 24-point lead in the standings over Schatz.

Coming to green in the A-main, Saldana’s Motter Equipment GF1 got a great start to get around Schatz for second place, but a red for Marc Duperron in turn four required a full restart. Saldana repeated the move while Madsen again darted to the lead from the bottom of the track. Schatz took the position back on a lap four restart and immediately set his sights on Madsen.

Behind the lead, the battle for third heated up as Saldana and Cody Darrah ran side-by-side for several laps with Saldana on the bottom and Darrah riding the rim of the 3/8-mile track. On lap 13 the battle for the lead was heating up as Madsen and Schatz had to navigate lapped traffic. On lap 18 Schatz had completed the pass in turns 1 and 2 and led down the back stretch.

Madsen dove to the middle of the track and got the drive off of the bottom coming to the line and crossed it back in front. The pair were deadlocked for another five laps with Darrah slowly reeling them in. Darrah was finally in contention for the battle when caution flew on lap 23.

On the restart Schatz, drove through middle of one and two and made the pass stick, this time for good on Madsen. Sweet got the high side working after the restart and moved up from fourth around Darrah and Saldana.

Sweet made it very clear he had his sights set on Schatz from there and began reeling him in by running around the top. On lap 27 Sweet got the run he needed and passed Schatz through turns 3 and 4 as he led down the front stretch. It was a short-lived lead, however, as Sweet pushed too hard into one and brushed the wall just enough to allow Schatz back by. Sweet kept it close, but could never make another push for the lead.

Schatz’s STP/Armor All J&J appeared to come in late, but early enough to make it count.

“We had something break in hot laps and killed a car, and it was kind of our baby car,” said Schatz, of Fargo, N.D. “It happens and we’ll keep working on it and make it better. I’m glad we got the win and it was a fun race. The race track worked where there was a top groove a bottom groove and guys running everywhere. Just to get the inversion with nearly no laps in the car it was great. We’re glad to get the win and now we’ve got the work to do.”

Sweet, who tapped the wall in turn 1 after taking the lead, looked strong for the second consecutive night in the Kasey Kahne Racing Ollie’s Bargain Outlets GF1 as he continues to gain on Schatz.

“At the end of the race we really got the top working well and gave Donny a run for his money,” said Sweet, a native of Grass Valley, Calif. “It’s a shame because they’re so hard to win right now because Donny is so fast. I think we had the superior car, but just a driver mistake getting into one and bouncing it off the wall and that was all she wrote.”

“We lost something there at the end, we don’t know what yet,” said Madsen of St. Marys, N.S.W. “Either a tire sealed up or the driver. It was a great weekend and we think we have a great baseline going into next week. Somehow Donny got around me while we were in lapped traffic, but I just kept my line in three and four and got back around him.”

Darrah remained in the hunt and nearly tracked down Sweet after his mistake, but going into the final lap Darrah charged into turn three trying to get around Sweet on the high side and drove in too deep and climbed the wall before the car died leaving Darrah in the final corner to finish 13th.

Schatz’s night got off to a rough start after totaling his primary car in hot laps after a piece in the front end broke, sending him into the outside turn four wall hard and flipping car. The team brought out a backup car and he qualified 12th.

The series returns to action at Skagit Speedway on Aug. 30–31 for the Monster Meltdown in Alger Wash., beginning a stretch of nine races in 10 days that will no doubt have a major impact on the championship battle.

NOTES – Brad Sweet was the fastest qualifier for the second night in a row around the 3/8-mile paper clip shaped track with a time of 13.786 seconds to earn five championship points. Also earning points were Daryn Pittman (4 points), Cody Darrah (3), Jason Sides (2) and Joey Saldana (1). … Jason Sides, Kerry Madsen, and Donny Schatz won heat races. … The dash draw was an 8 for the 13th time this year. … Kerry Madsen won the dash for the third time this year and second night in a row.