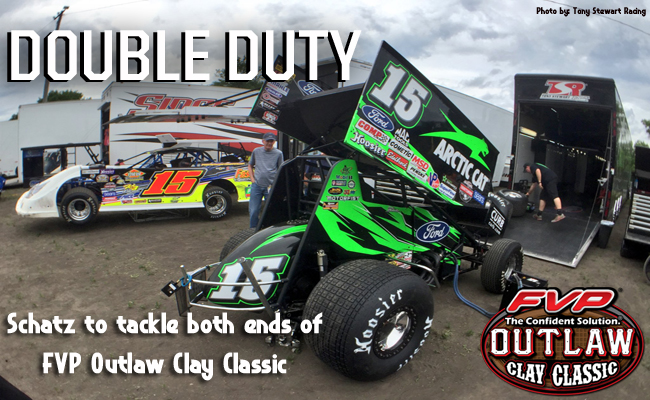 CONCORD, NC — June 26, 2017 — One driver is set for a busy week when the World of Outlaws rolls into Joliet, IL for the FVP Outlaw Clay Classic at the Dirt Oval at Route 66. When the opportunity arises, Donny Schatz is one driver that jumps at the chance to race anything with wheels on it, even if that makes his schedule a little busier. Schatz will strap into his No. 15 Arctic Cat World of Outlaws Craftsman® Sprint Car Series ride on Tuesday night, and the following night he’ll switch gears and jump into his No. 15 Rocket Chassis with the World of Outlaws Craftsman® Late Model Series.

“It’s summertime; it’s time to get going,” said Schatz. “You expect that kind of thing in the summer, and when you get the opportunity to do something like that you got to make the best of it and take every opportunity you can because life is short.”

“There’s a lot to learn,” added Schatz. “It’s a completely different feel the way the cars like to roll around. Two different nights, two different types of racecars are going to be a little bit interesting. This way, I’ll be able to focus on everything at hand in front of me that particular night.”

Schatz is no stranger to running multiple classes on a given weekend. Earlier this season during the DIRTcar Nationals at Volusia Speedway Park in February, Schatz ran both the Sprint Car Series and Late Model Series events to kick off the World of Outlaws 2017 season. Schatz won’t be just kicking back on Wednesday night at Joliet either. He’s a competitive person that wants to win — no matter what he drives.

“Realistically, I would love to be able to go there and win, but realty says that’s probably not an option,” Schatz said, “but I’m fortunate to be around great people. It’s a lot of fun. Ultimately, you’re a competitive person and you want to be up there racing for a win or be competitive anyways.”

Schatz will be running a Mark Richards-prepared Rocket Chassis Late Model next week.

“Mark Richards at Rocket Chassis has made sure my [Late Model] is right where his [house car] is at. That way we can have a running start,” Schatz explained. “There’s a lot of setup with the Late Models because I don’t know a lot of tricks when it comes to driving. In fact, I don’t know any tricks when it comes to driving [Late Models]. Experience always seems to be a prevailing factor.”

The North Dakota-native clearly has a handle on his World of Outlaws Sprint Car, having picked up his 11th win of the season at Granite City Speedway on June 20. Schatz currently sits at the top of the point standings as he aims for his ninth career championship.

Now he has the chance to jump into his Late Model, an opportunity Schatz would love on a more regular basis.

“I do have a lot of friends on the [Late Model Series],” Schatz said. “I think the opportunity for the [Sprint Car Series and Late Models] to run back-to-back is awesome. I wish they did it a little more often. It may free up some more time for these race teams to get some stuff done — maybe more people would [run both series]. It’s a great opportunity for me, and I’m going to make the best of it that’s for sure.”

Donny Schatz and the World of Outlaws Craftsman Sprint Car Series takes to the Dirt Oval at Route 66 in Joliet, IL on Tuesday, June 27. Schatz will join the rest of the full-time World of Outlaws drivers as they will close out the FVP Outlaw Clay Classic the following night on Wednesday, June 28. For tickets, call 844-DIRT-TIX or visit www.WorldofOutlaws.com/Tickets