Schatz Honored as EMPA Driver of the Year 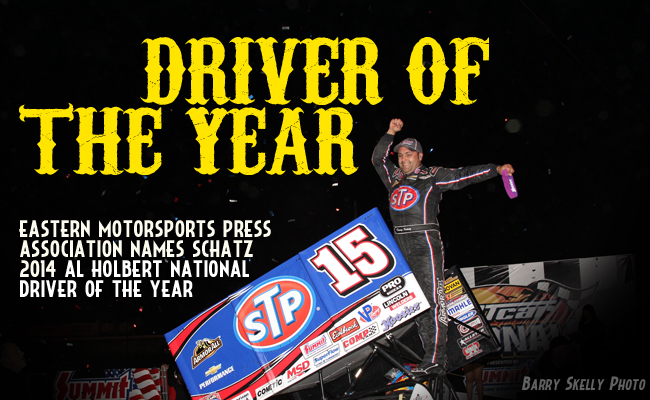 Schatz Honored as EMPA Driver of the Year

First ever Outlaws driver to win the award twice

CONCORD, N.C. – Jan. 5, 2015 – Donny Schatz added another accolade to an already stellar season on Saturday night after being named the Al Holbert National Driver of the Year by the Eastern Motorsports Press Association.

During its banquet on Saturday in King of Prussia, Pa., EMPA awarded the now six-time champion its prestigious award.

Schatz, who is currently racing in Australia, was unable to attend the ceremony. Accepting the award on his behalf was Chris Dolack, vice president of communications for the World of Outlaws. 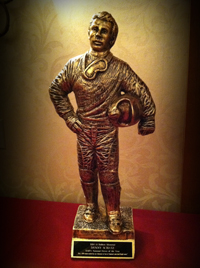 “When you are in the midst of a year like we had in 2014, you rarely get the time to truly ap­preciate what you are accomplishing,” Schatz wrote in prepared remarks delivered by Dolack. “I personally want to thank all the members of the Eastern Motorsports Press Association for this award and more importantly for covering motorsports and sharing the incredible stories that happen at race tracks with both the people who witnessed it and those who weren’t able to be there.

“Earning EMPA’s 2014 Al Holbert National Driver of the Year award is something I’m really proud of, but I know I couldn’t have been the recipient without incredible dedication from my crew at Tony Stewart Racing (Rick Warner, Steve Swenson and Eric Prutzman) and our organization led by Tony Stewart, and assisted by people like Jimmy Carr, Misha Geisert and Bill Klingbeil. We had a record-breaking season in 2014 and accomplished a lot. It’s providing us with motivation to come back in 2015 and keep raising the bar.”

Schatz won the award after a record season that included 26 wins on the way to his sixth World of Outlaws STP Sprint Car Series championship. Over the course of the season, the Tony Stewart Racing driver led 438 laps, went on a six race win streak and had no DNFs. Schatz was the first driver since Steve Kinser in 2002 and 2003 to score back-to-back 20 plus win seasons. He also took over the third spot on the list of all-time series winners behind Sammy Swindell and Steve Kinser.

Schatz is the first ever World of Outlaws driver to receive the award twice (2007 and 2014) and only the second ever to receive it along with Daryn Pittman (2013).