Schatz Honored As EMPA Driver of the Year 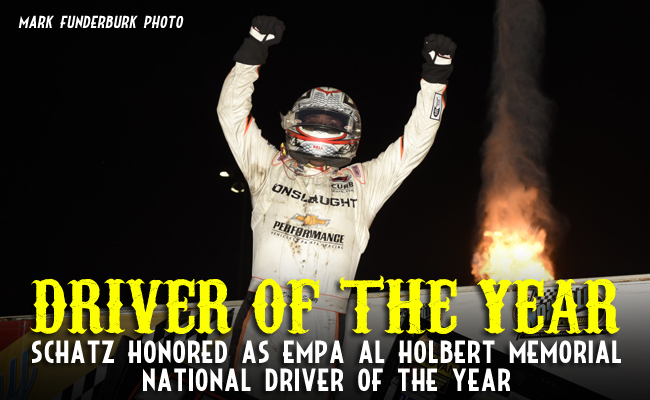 Donny Schatz Honored as EMPA Driver of the Year

CONCORD, N.C. – Jan. 11, 2016 – For the second year in a row, Donny Schatz was named the Al Holbert Memorial National Driver of the Year by the Eastern Motorsport Press Association.

The accolade, awarded annually by a vote of the members of EMPA, was presented on Saturday night during the association’s convention in King of Prussia, Pa.

Schatz, who is currently racing in Australia, was unable to attend the ceremony but a statement was read on his behalf.

“It’s an honor to be recognized by the Eastern Motorsport Press Association and earn this year’s Al Holbert Memorial National Driver of the Year award,” Schatz wrote. “I’m humbled just being mentioned in the same breath with incredible talents like Erica Enders-Stevens, Jonathan Davenport, Scott Dixon and Joey Logano. They all had incredible seasons and I feel fortunate that we were able to accomplish what we did this year.

“It was a golden season for me in so many ways. A seventh Outlaw championship. A ninth Knoxville Nationals victory and a career-best 31 wins. I couldn’t have won this award without being surrounded by remarkable people starting with Tony Stewart, who continues to provide myself and my crew – Rick Warner, Steve Swenson and Eric Prutzman- the opportunity to do what we love to do. My crew is second to none and they work extremely hard to put us in position to win each and every night.”

Schatz won the award for third time following a record-setting season that included 31 wins, the first 30-win season since 1992, and a ninth Knoxville Nationals title on the way to his seventh World of Outlaws Sprint Car Series season. He also became just the second driver ever to have back-to-back-to-back 20 plus win seasons. Schatz led 601 laps in his No. 15 Bad Boy Buggies/Chevrolet Performance and in 75 completed features, finished in the top-five in 60 times.