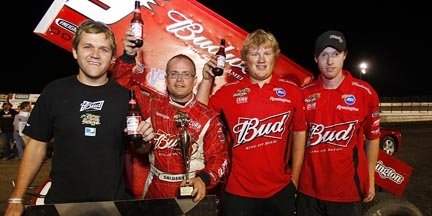 Heading into the 2009 season, Joey Saldana had won sprint car races in Australia, New Zealand and numerous ones in the United States, though one place missing from that list was Canada, where the World of Outlaws have competed a total of eight times over the last three years. The native of Brownsburg, Indiana changed that on Friday night in the opener of the third annual Oil City Cup at Castrol Raceway in Edmonton, picking up the win to add a win north of the border on Canada to the list of countries he has won in.

For Saldana, it was his series leading 14th A-Feature of the season and the 53rd of his World of Outlaws career. He has now won six times on 3/8-mile tracks this season to lead the series aboard the Budweiser Maxim.

“It’s huge to win here,” said Saldana in Victory Lane. “This is a long trip up here and to come and race at a facility like this is nice. I wish there was more tracks like this and people that support 410’s (sprint cars). If you want to see good racing, this what it is, the World of Outlaws.”

Saldana lined up second and blasted his way into the lead on the high side of the track in turn two after Danny Lasoski led the field into turn one after starting on the pole. He quickly jumped to a big lead as Donny Schatz moved into second with Lasoski retaking that spot on the third lap, setting up a battle between Schatz and Kinser for the third position.

The leaders found themselves in lapped traffic for the first time on the sixth lap with Saldana continuing to use the high side of the track, as he worked through heavy traffic for the next eight laps before the first caution of the night flew on the 14th go-around. Saldana would endure five cautions over the course of the 35-lap contest with 20-time series champion Steve Kinser lining up second on each of the subsequent restarts.

“It was definitely better the longer the runs went,” noted Saldana of his car. “I saw Steve (Kinser) down there on the bottom a couple of times and I think that the longer we ran the better we got. I felt really good and I thought we may have put a little too soft of a tire on and if we had put a little bit harder tire on we would have been really good. It was a great effort by the team.”

Saldana used the high side of the track on each restart, with Kinser looking low entering turns one and two each time. On a restart on the 19th lap Kinser nearly got even with Saldana heading into turns three and four. Saldana used strong restarts each time to maintain his lead, including on the final restart of the night with just two laps remaining.

“It was a great race for us tonight and a great track,” Saldana stated. “It was awesome, I like tracks like that. It was a good run for the entire team. We worked hard all night. We drew the 10 (in the dash) and won the race. That’s hard to do with these guys.”

Kinser lined up fourth and battled Donny Schatz early in the race taking the third spot from him on the third circuit. He then tracked down Danny Lasoski and got around him on the 10th go-around before setting his sights on Saldana. Kinser would end up second in the Quaker State Maxim.

“We definitely gained a lot tonight from where we have been the last three or four races,” shared Kinser. “I feel like we have a car that we can get up front and we’ll work with it and see what we got tomorrow night.”

Schatz started third and moved into second on the opening lap getting around Danny Lasoski, with the latter retaking the spot on the very next lap. Schatz challenged Kinser a number of times for the third spot over the course of the 35-lapper. The three-time and defending series champion ended up third in the Armor All J&J.

“My brain wouldn’t let me get up there on the cushion and climb the fence,” said Schatz. “I tried to do everything I could everywhere else. I had a great race car and that’s the way it goes sometimes. You’ll have those nights where you are back there and trying to battle for a win, but your just not close enough.”

Kinser had a couple of close calls, including having a lapped car spin right in front of him in turn four on the 30th lap. He took evasive action and continued on. This came after a lap-23 brush with the turn three wall at full speed. For Kinser it was his 39th Top-10 finish of the season.

“It was pretty close,” explained Kinser of the lapped car that spun in front of him. “I got around him and we had a good run. We’ve been struggling a little bit and got a little more on pace here tonight. It felt pretty good to be able to drive the car pretty hard.”

The podium finish for Schatz was his series leading 33rd Top-Five finish of the season as he chases his fourth consecutive title. In five career starts at Castrol Raceway dating back to 2007, the North Dakota native has four finishes of third or better including a win.”

“Tonight we kind of played around and tried some different things with our car,” said Schatz. “We have been pretty decent most of the times we have come here. We’ll just work a little harder tomorrow. We have a few things that we know we can change and try to get a little better. That’s all we can do.”

Craig Dollansky charged all the way from the 13th starting spot to finish fourth in the DirecTV Maxim to earn the KSE Racing Products Hard Charger Award. Danny Lasoski was fifth in the Casey’s General Store JEI, with Jason Meyers sixth aboard the GLR Investments KPC. Kraig Kinser was seventh piloting the Bass Pro Shops Maxim, with Jason Sides who set fast times in time trials, eighth in the Wetherington Tractor Service Maxim. Brian Ellenberger was ninth in the Ti-22 Performance J&J. Lucas Wolfe rounded out the Top-10 in the Allebach Racing Maxim.

The World of Outlaws return to action on Saturday, August 29 with the finale of the third annual Oil City Cup at Castrol Raceway in Edmonton, Alberta, Canada.