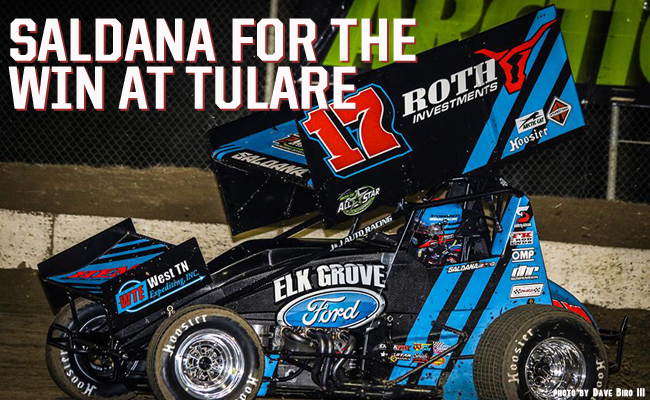 TULARE, CA – March 8, 2017 — Throughout the years, one of the more accomplished World of Outlaws Craftsman® Sprint Car Series drivers at Thunderbowl Raceway has been Brownsburg, Indiana’s Joey Saldana, who returns to the track on March 17 and 18 aboard the Stenhouse Jr./ Wood Racing No. 17 Sprinter.

The World of Outlaws Craftsman Sprint Car Series veteran has claimed four series features at the Tulare-based facility, tied for the most all-time wins with San Jose-favorite Tim Kaeding. Saldana’s World of Outlaws wins at Merle Stone Chevrolet Thunderbowl Raceway all came during his time driving for Kasey Kahne Racing, occurring in 2007, ’09, ‘10 and 2011.

The man simply known as the “Brownsburg Bullet” ranks sixth on the all-time World of Outlaws win list with 99 career victories. The only drivers ahead of him on the illustrious list are Steve Kinser, Sammy Swindell, Donny Schatz, Mark Kinser and Doug Wolfgang. Four of those five are currently in the National Sprint Car Hall of Fame, a place Saldana looks to end up at the conclusion of his career. The 45-year-old has traditionally been strong in the Golden State over the years.

“It would definitely mean a lot to get another win in Tulare,” Saldana commented. “Last year I drove for Dennis Roth, and now Roth Investments is a partner on the SJW Racing 17 car, so it would be nice to get a win in their backyard. Thunderbowl Raceway has been a good track for me over the years, and one thing is for sure, it’s always exciting for the fans. I definitely think it suits my driving style really well. You have to be aggressive, but also have things fall your way in traffic. Hopefully it all comes together and we can park it on the front stretch for all our partners.”

Also competing both nights will be the always entertaining Wingless Sprints of the USAC West Coast 360 Series. Along with the March weekend the tour is also set to compete at the Thunderbowl on April 22 during the Peter Murphy Classic finale and at the JD Heiskel & Co. presents Chris & Brian Faria Memorial on May 20.

Last season Garden Grove’s Brody Roa earned a pair of wins en route to his first career USAC West Coast Series title. Perennial Wingless favorite at the Thunderbowl Ryan Bernal of Hollister will also be in the field looking to add another Tulare trophy to his mantle.

Tickets continue to be on sale for the World of Outlaws/ USAC West Coast Sprint Car Series weekend on March 17 & 18 by calling 559-688-0909. All seating in the house is reserved, with grandstand tickets $45 on Friday & $50 on Saturday. Bleacher tickets are $40 on Friday and $45 on Saturday. Kids 6-12 are half price and 5 & under are free. The Saturday finale will also see the Sport Mods in action.

Merle Stone Chevrolet Thunderbowl Raceway is located at the Tulare County Fairgrounds on the corner of Bardsley and K Streets in Tulare, California. From the junction of SR 99 and SR 137, go west on SR 137. At South K go south one-half mile to the Fairgrounds. Camping is also available at the fairgrounds located off turns three and four.