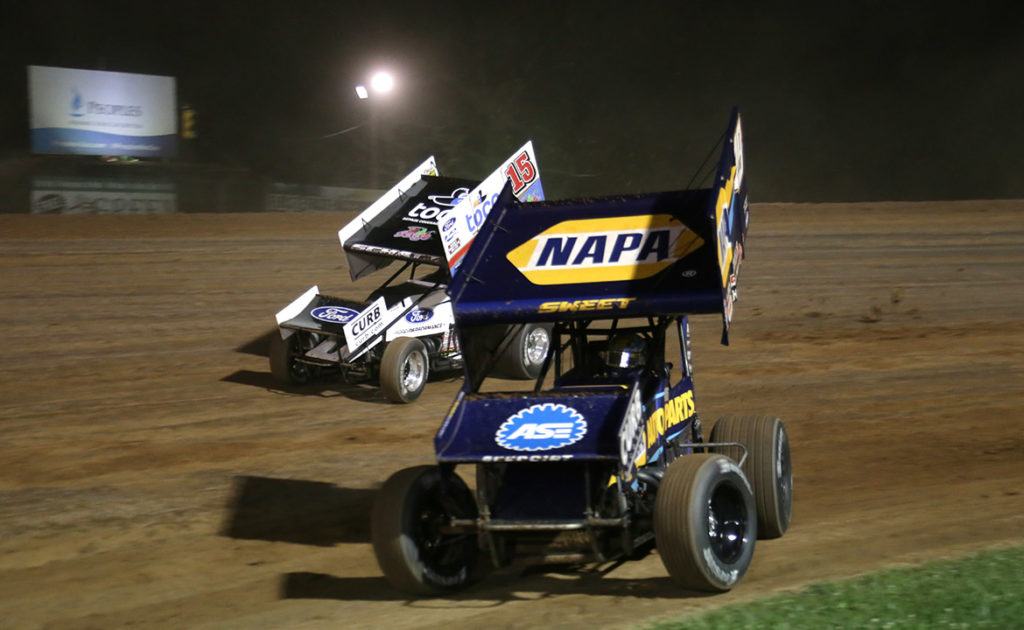 The stars of the Series are poised to put on another epic show Saturday, Aug. 23, at the Rapid City, S.D. track, again showing fans why the World of Outlaws is The Greatest Show on Dirt. This time, the winner will claim $20,000 for taking the checkered flag in the NOS Energy Drink Rushmore Outlaw Showdown.

Brad Sweet picked up his first win at the track last year, making a late race pass on Jacob Allen to take the lead and run away with the win. Sweet and his Kasey Kahne Racing team are already on a tear this year, winning 11 races – the most wins of all drivers this season, so far – including the Kings Royal and has held the points lead for the past two months.

Finishing second to Sweet last year was 10-time Series champion and Fargo, N.D.-native Donny Schatz. The two have been trading wins throughout the summer and may find themselves battling for the win again at the speedway.

Schatz is also second behind Sweet in the points standing with seven wins, so far, this season. He’ll be determined to best the Grass Valley, Calif. native near his home state.

In one of his best performances of the 2018 season, Allen charged to the lead at the start of the race and pulled away from the field. He looked poised to pick up his first ever World of Outlaws victory. However, with six laps to go a caution came out. On the restart, Sweet out dueled him for the lead and Allen had to settle for a fifth-place finish.

Allen is still searching for his first career World of Outlaws victory, but with another performance like last year he may find himself standing in Victory Lane this year with the $20,000 check.

NOS Energy Drink has jumped on board to sponsor the race, adding $10,000 to the winnings — bringing it to $20,000 and making the event one of the biggest paying races during the “summer of money.”

With a lot of money on the line and a close points battle raging on throughout the season, the NOS Energy Drink Rushmore Outlaw Showdown is sure to be a thrilling show. Better yet, kids 6-and-under are FREE in general admission.

Grandstand gates open at 3 p.m. with Hot Laps at 6 p.m. and racing at 7 p.m. Get tickets and more information.