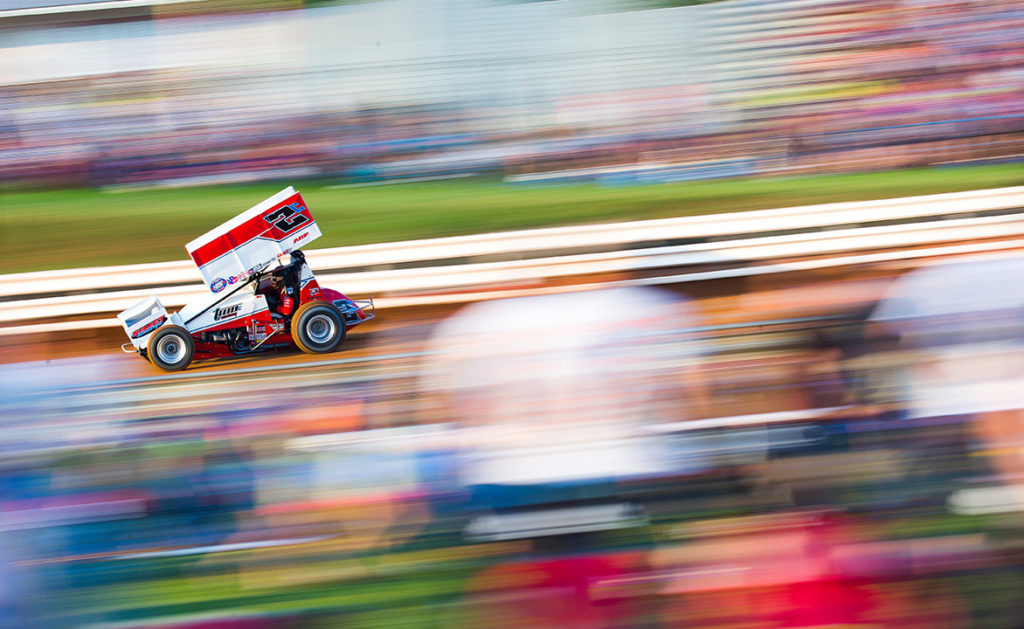 The Oklahoma-native won the 2020 Kevin Gobrecht Rookie of the Year Award – becoming the 38th driver in the history of the Series to win it – but that’s not what excites him most.

With two races remaining at the end of the 2020 season, Johnson, who struggled to find speed for the majority of the year, discovered the Jacobs Ladder mounts on the chassis he’d used for the past year and a half were off. Once fixed, Johnson said “the warm and fuzzy feeling” he’d been searching for all year with his car was finally there.

“Shane Stewart drove the car that night (at Cedar Lake Speedway) and said something was wrong with it,” Johnson said. “We could never put our finger on it. Once I figured it out, the car really drove good at Kokomo and then at Charlotte.

“I brought (veteran crew chief) Rob Hart in to help me. I kept blaming it on the tires. Just couldn’t figure it out. The week from Pennsylvania to Kokomo, we came home, I gave the boys a couple of days off and I took the car apart myself and got to measuring. Some Jacobs Ladder mounts were off and that’s not something you usually check anymore because the car builders have that in check. Anyway, found some stuff that was wrong, fixed them, and found speed.”

While the fix was worth celebrating, it also presented an issue. The majority of notes recorded by Johnson and the Two-C Racing team throughout their first full-time World of Outlaws season became irrelevant. Now, they’ll have to start from scratch, again, in 2021.

However, that hasn’t diminished Johnson’s newfound confidence in his cars and himself.

“I was starting to doubt myself. I really was,” Johnson said. “Did you forget how to do this? Then, I felt so much better in the car. But I had beat myself up the whole season. I didn’t come into this thing thinking we were going to win a championship or 25 races or anything like that. I just felt like if we came in to be competitive and start building off of that, at some point the stars would align and everything would work out; we could win a race. We weren’t even in the hunt. There was a lot of turmoil in the team. We just thought we were going to be better. I think next year, right out of the gate, we’ll be better.”

Johnson ended his rookie season with one top-10 and a 12th-place finish in points. And while Johnson, at 49 years old, was a rookie for running his first full-time season with the Series, he entered the year with 152 World of Outlaws starts. Because of that, he never thought of himself as a rookie and didn’t think much of trying to win the Rookie of the Year title. He’d even stated he’d like to tie for the honor with his rookie competitor Mason Daniel and have the tiebreaker go to Daniel.

But once the season ended, and Johnson received his Rookie of the Year Award, his outlook on winning the title changed. Along with his name, every Rookie of the Year winner – such as 10-time Series champion Donny Schatz, two-time and defending champion Brad Sweet and two-time champion Mark Kinser – grace the plaque.

“After seeing all the names on the list and just thinking about Kevin Gobrecht, you know, losing his life to the sport that we love, it kind of hit home then and I really thought, “You better cherish this and take this in as a moment,” Johnson said. “There’s not a lot of guys on that list. It meant more after I really sat down and thought about it. Before then, I was just trying to get going and get the results that we needed or felt like we wanted and try to be better. Never really thought about the rookie thing until the day of the banquet and they handed me that plaque and I started reading it. It was like, “Wow, this is pretty cool.”

One of Johnson’s biggest takeaways from his rookie season is learning to manage the long schedule, which nearly doubles for 2021 as the Series looks to return to a normal 90-plus race season. Not only was he and the team traveling to new places they had never been, but they also had to learn to live with each other for about 10 months straight.

Johnson compared living on the road with his crew like marriage and admitted there was tension within the group at times, especially when they were running bad.

“You all have to live in the same spaces and travel together,” he said. “Honestly, that’s been the biggest hurdle. We’ve always done that on a smaller scale, running the 360s (Sprint Cars). Everybody’s emotions have been masked with everything going on this year, too. I think the biggest thing for me is that. Is making sure the team is functioning together and working as a team and knowing just how tough it is now. I knew it was tough, but I thought going into 2020 that we could be competitive and run upfront. It opened my eyes that we had a whole lot of work to do to get better.”

The team brought in a couple of crew chiefs throughout the year, which helped take some burden off of Johnson, who was making the calls on what to change with the car, but also showed him that he knew what he was doing. They also caused a bit of stress within the team, he said, as the chemistry wasn’t there.

Johnson won’t have an official crew chief for 2021 but said crew member John Ivey will have an expanded role. He’s worked with Johnson since 1998 and returned to working on a car full-time for the first time in 20 years this season.

He’ll start the 2021 season Feb. 5-7 at Volusia Speedway Park for the 50th DIRTcar Nationals with the same car he ended the 2020 season with but will have three brand new cars waiting to guide him through his Sophomore year. And while there is still a lot for him and the Two-C Racing team to learn, Johnson is confident they’ll be at the competitive level they expected to be this year.

“Do I feel like we can come out and run for a championship? Probably not,” Johnson said. “But we can definitely come in and be competitive where we just weren’t competitive this year. It stems from the stuff we had wrong. As a driver, I feel like I can get the job done. Todd and Kelly (Carlile, owners of Two-C Racing) have given me all the equipment to do it.”

RAISING THE GATOR: Moran Reflects on DIRTcar Nationals; Ending on a High Note with His Brother