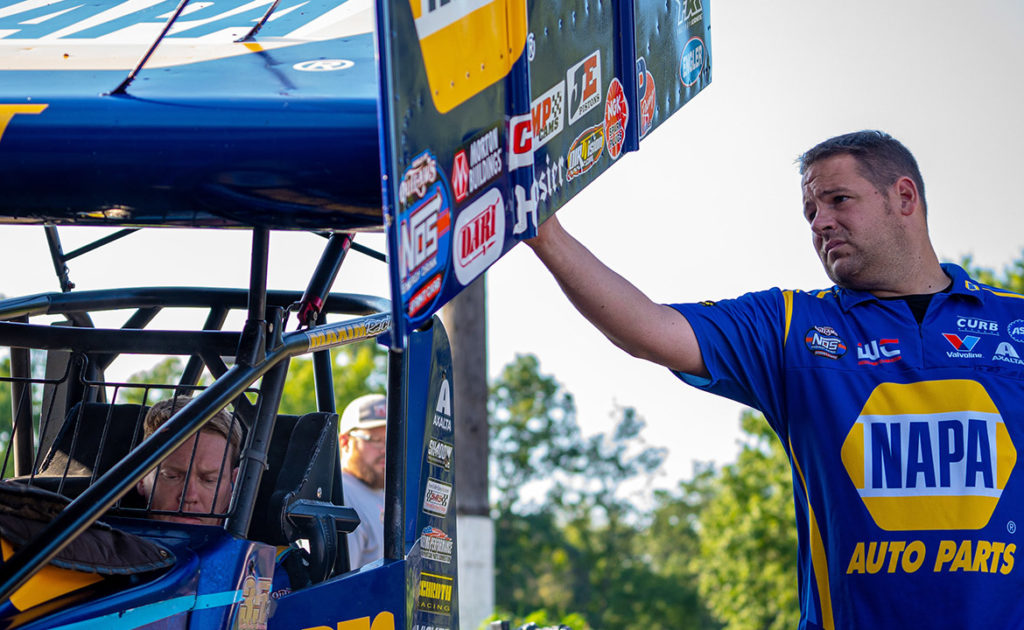 An imaginary orbital belt of numbers and equations can be seen circling Eric Prutzman’s head on any given race day.

He’s always searching. Always thinking. In his emotionless gaze at the NAPA Auto Parts No. 49 car or the night’s race track, it’s not hard to predict what he’s thinking about, either.

“At the race track, not at the race track [racing] is all I really think about,” Prutzman said. “That’s it. It’s racing. How to go as fast as possible and win as many races as possible. Winning is pretty much all that matters.”

In his second year as Brad Sweet’s crew chief, he and Sweet have already collected 11 wins — including the $175,000-to-win Kings Royal — and continue to hold the points lead heading into this weekend’s Ironman event at Federated Auto Parts Raceway at I-55.

BEING AN OUTLAWS CREW CHIEF

Unlike many other forms of motorsports, such as NASCAR, where the crew chief makes a plan for a race track weeks in advance, conversing with engineers and studying wind tunnel and simulation numbers, Prutzman and the rest of the crew chiefs in the World of Outlaws NOS Energy Drink Sprint Car Series aren’t allotted that kind of time or those kinds of resources.

While there’s preplanning, with a more than 90 race schedule, there’s no wind tunnels to go to. No track simulators to test out various setups before going to the track. There are barely any opportunities to test.

In the World of Outlaws, there’s just the crew chief and the driver — and sometimes the driver plays both roles.

Sweet, who spent several years in NASCAR, prefers it the Outlaws way.

“I can control my own destiny a lot more here,” said Sweet, of Grass Valley, Calif. “There’s a lot more factors on how your car reacts in NASCAR. The crew chief, the engineers, what team you’re driving for and the manufacturer. Here, it’s just you buy a car and go out. I feel like I could get in a lot of people’s cars and make them better just by my experiences. And Eric could make a lot of people a lot faster with his experiences.

“The Outlaw tour is, you have to put your time in. Once you figure it out it’s just that human element. You just focus on your own car and go out there and race every night. It’s a lot more fun. The NASCAR side of things is a lot more politics. I like this grassroots style. I like the fact that the fans can interact with us, how you interact with the crew chief. Everything is more on a personal level.”

Like all forms of motorsports, it takes time for the driver and crew chief to learn each other and become comfortable with one another.

“Yeah, [we] had to work on learning each other’s language,” Prutzman said about first working with Brad. “Everyone talks a little different. You’re talking about the same thing, but how he might approach it is different than how I might talk. Learning that was the biggest thing.”

Once they got the language down, Prutzman said he feels he and Brad have a good sense of what they need from each to continue to click off wins. That doesn’t mean they don’t have their quarrels at times, though. But it’s always for the betterment of the car.

“You’re always just trying to be better,” Prutzman said. “It’s never anything other than that. We’re more like brothers. More like that than anything.

“Some nights it’s his idea that wins, some night it’s mine. You just kind of try it at some point and if it didn’t work, OK, let’s go the other way. Some nights, he’s right, some nights I’m right. Some nights we’re both right.”

Since winning the 2018 Knoxville Nationals, Sweet and the team have picked up 16 wins. They’re also tied with Donny Schatz for the most podium finishes this year — 20 in 44 races.

“I would say since leading in the (Knoxville) Nationals last year, we’ve pretty much been on the same page,” Prutzman said. “Just clicking away. Obviously, this year, the changes to the car and all of the rain dampened it, but now that we’ve got into a good rhythm, we’re just clicking away.”

When Prutzman first started working with Sweet in 2018, he was coming off a self-imposed break from being a crew chief.

He had served as Daryn Pittman’s crew chief at Kasey Kahne Racing in 2017 — a tenure that only lasted six months.

His time off was short lived, though. Sweet was in the market for a new crew chief for the 2018 season after his former team leader, Kale Kahne, retired at the end of the 2017 season. His pick, Prutzman.

“The way I’ve always done it with my crew chiefs is I like to always work together,” Sweet said. “I don’t like me to make the calls or him have any preconceived notions of what it has to be. That’s the conversation I had with him (Prutzman) and he seemed like he was really on board with that mindset.”

Prutzman was then back on the road. However, Sweet admitted they’re an odd pairing.

“Eric and me are kind of opposites in a way,” Sweet said. “I like to talk and really figure things out. He’s quiet and a thinker. I think both of our experiences have kind of met in the middle.”

The key to their relationship, Sweet said, is Prutzman trusts him and he trusts Prutzman.

Being a crew chief wasn’t always Prutzman’s goal growing up in Pennsylvania. But the longer he stayed around Sprint Car racing, the more it dragged his ambitions into the sport.

“Once I got out here on the road and started working out here, that was my goal,” Prutzman said. “I’ve been out here since 2006. On and off. It’s been a long time, a long journey to get here. Once I got out here, kind of saw what it was all about. Then, yeah, that’s all I wanted to do.”

His dad raced since he was born, so going to Sprint Car races was his life. He never had the desire to drive. The mechanical side of the sport appealed to him more.

“I don’t know if that makes me weird or not,” he said with a smirk.

Eventually, he got the urge to work with a Sprint Car team on the road.

That urge led to working with Tony Stewart/Curb-Agajanian Racing. He started with the team in 2009 and stayed with them for seven years, working as a mechanic. In that time period, TSR-driver Donny Schatz won four of his 10 championships.

“I learned from Ricky Warner, Jimmy Carr and Donny, obviously, Tony Stewart,” Prutzman said. “Just being around those people you learn a lot, learn how to do things a certain way. That seems to be the right way. Just try to take all I could from there.”

After seven years with the team, Prutzman decided he wanted to try his hand at being a crew chief. He first worked with Joey Saldana at Roth Motorsports for a year in 2016 – which was an OK year, he said. Then he moved on to work with Pittman, before eventually finding his way to Sweet.

Now they’re on a championship run – and a season Sweet has called “a dream season.”

He contributes part of their success to his time with TSR, being around a championship winning team and seeing what it takes to be one.

“I kind of understand the years when we did win championships, what it was like and how, just how to go about things,” Prutzman said. “I guess that’s what I would say I learned is how to go about your daily business at the track. Your (business) away from the track. Just keeping the mindset of just always being in here. Working. Just always working. Keep trying to get better.”

The biggest contributor to the team’s success this year, Prutzman said is that hard work paying off. There’s no detail left off the check list. And even when there is a random issue — such as a U-joint breaking during the Feature at Cedar Lake Speedway in the beginning of July or Sweet getting involved in a wreck on the first lap at Hartford Speedway — they’re ready for it.

With a second Feature at Cedar Lake Speedway set to roll on the track about an hour after the first one, the Kasey Kahne Racing team rolled out a back-up car and had it ready to go with minutes to spare before the next set of Hot Laps began. Sweet went on to win the that Feature at Cedar Lake.

Then at Hartford Speedway, during the red flag for the first lap wreck between several cars, the KKR crew, with help from others, put in a new front axle and a new top wing on Sweet’s car before the Feature went back green. With a bent rear axle, Sweet still salvaged a sixth-place finish.

“Just one of those good runs where all of the hard work is coming together,” Prutzman said. “Once you get on one of these waves, you’ve got to ride it as long as you can. Just keep plugging away and do it again every night. Out here things change in a hurry. You never know. You never know when it’s going to come to an end. You’ve got to keep going. Keep trying and not get discouraged or frustrated and keep working.”

His work starts during the week, getting the car maintained and ready for the next race. Then at the race track it’s all about the crew, Sweet and him. Checking air pressures. Looking over the motor. Talking with Sweet and finding a baseline for the night.

“Sprint Car racing is just two guys,” Sweet said. “A human element. A crew chief just watches his race car. Just kind of have to go off the cuff with the driver. Just two guys interacting to get the car better. No outside influences. No engineers. No 10 people trying to give advice on what it is.

“That’s what makes Sprint Car racing so cool still. Engineering hasn’t taken over. There’s no way for a guy to go to the wind tunnel or go to a shaker or go out engineer other people. Everybody can buy the same car, and the same engine, pretty much, and the driver and the crew chief can just outperform the other guys or not. You’re always searching.”

You can see that in Prutzman’s emotionless gaze at the race car or race track every race day.

You’ll see that at the World of Outlaws’ next stop on Friday, Aug. 2, and Saturday, Aug. 3, at Federated Auto Parts Raceway at I-55 with $20,000 on the line Saturday. Get tickets and more information.