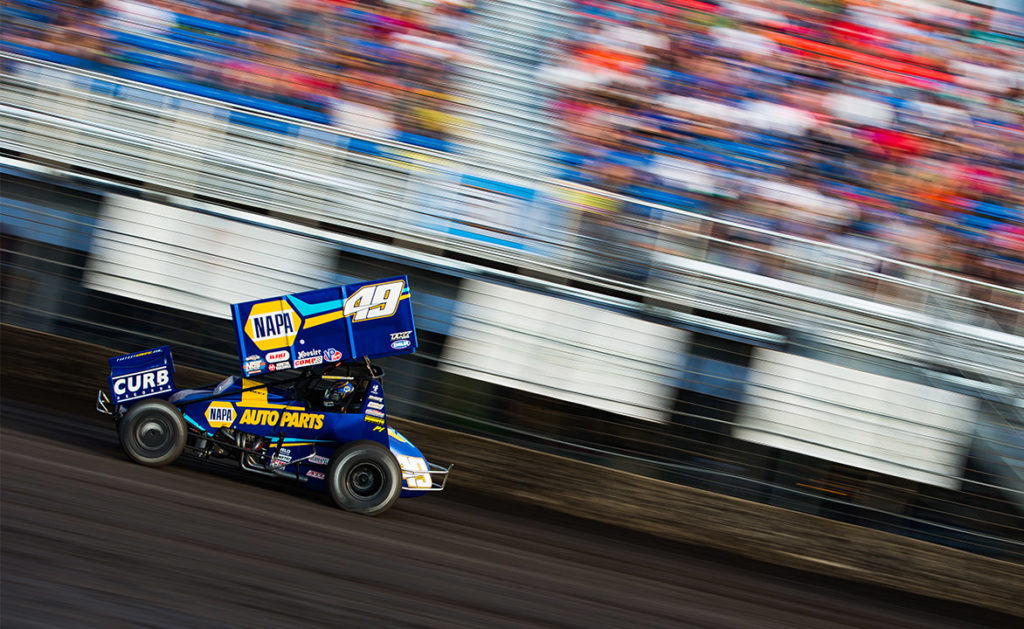 Now, reigning champion Brad Sweet said he believes he and his Kasey Kahne Racing team have reached the high bar Schatz had set and have surpassed it.

“I feel like we’re the best team out here,” said Sweet, of Grass Valley, CA. “I’ve been kind of saying that. That just comes from confidence and winning races. You know, being the car to beat night in and night out right now. We’re still working hard. We know Donny is gunning for us. Logan (Schuchart) is gunning for us. There’s a lot of other great guys out there gunning for us.

In 17 races, so far, this season Sweet’s worse finish is 12th – his only finish outside the top-10. He currently has five wins, 14 top-five finishes – 13 of them podium finishes – and 16 top-10 finishes. He started the year off winning the DIRTcar Nationals title and came up one spot sort last week from winning his third Jackson Nationals title.

Sweet and his NAPA Auto Parts team proved they could go after a championship, even with adversity in the way, at Cedar Lake last year. During a single-day Feature doubleheader – due to rain the night before – a part broke on Sweet’s car in the first Feature while he was running third, taking him out of the race. The damage was enough to warrant bringing out a back-up car. Wasting no time, the team had it ready in less than an hour before the second program of the night started.

Their hard work paid off with Sweet dominating the 35-lap Feature and picking up his second win at the 3/8-mile speedway.

“It shows we have a really great team to overcome things like that,” Sweet said. “We were actually kind of disappointed because we felt like we had a good shot to win both of the nights and were on a good run. You never want to have those types of issues. Those are kind of what win championships when you’re able to overcome the adversity you see a lot of the times throughout a World of Outlaws season.”

After Cedar Lake, Sweet won eight more races – ending the year with 16 in total – and only finished outside the top-10 twice in the remaining 36 races of the season, leading to his championship win by four points over Schatz.

“We were pretty focused last year and pretty determined,” Sweet said. “Obviously, we looked at that as we lost points, so we didn’t want to lose that night. Like I said, you’re going to have those nights. It’s just how do you overcome them? How do you rebound from them? With this race team, we’re getting more and more confidence and they work really really hard to be as well prepared as anyone out here and probably the most well-prepared team there is.”

He and his team will look to sweep another weekend in Wisconsin this year by winning the special $3,000-to-win Elimination Showdown race on Thursday and then the regular $20,000-to-win shows on Friday and Saturday. They already swept the weekend at Beaver Dam Raceway early this season and came close to sweeping the Jackson Nationals last weekend with a win, a third-place finish and a second-place finish.

Schatz, who has be searching for consistency with his team this year – recently coming off an 18th-place finish, fifth-place finish and eighth-place finish, respectively, at the Jackson Nationals – recognized Sweet and his team have reach the bar he set.

“They’ve (KKR) had a good target to chase for a while,” said Schatz, of Fargo, ND, after finishing second to Sweet at Beaver Dam. “It’s time to move that bar again… It is what it is. This is a humbling sport. It’s a humbling game. We’re not hanging our heads. Some nights you’re going to run second. There’s a lot of night you’re going to run second to that (KKR #49) car. We just keep digging.”

You can purchase tickets for the three-day event at Cedar Lake Speedway by clicking here.

If you can’t make it to the track, you can watch all three nights of the action live on DIRTVision. Saturday’s race will also be live on CBS Sports Network at 9 p.m. (ET).