Rider has built engines for the likes of Kyle Larson, Carson Macedo and Aaron Reutzel

Kyle Larson, Carson Macedo and Aaron Reutzel have all visited Victory Lane several times in 2020 with a common theme between the three drivers. They all run Rider Racing Engines.

The Mechanicsburg, PA operation, owned by Tom Rider, has been in business for 35 years, helping several drivers park their cars in the winner’s circle.

This weekend, Macedo will look utilize his Rider Racing Engine to do just that again at Lincoln Speedway on Thurs., July 23 for the Gettysburg Clash presented by Drydene and at Williams Grove Speedway on Fri., July 24 and Sat., July 25 for the Champion Racing Oil Summer Nationals. The Lemoore, CA driver struggled at the Pennsylvania tracks in his rookie year last year but has seemed to overcome that hurdle by winning track events at both speedways this year with his Kyle Larson Racing team.

We talked with Tom Rider about his operation and what it takes to build an engine capable of helping drivers like Macedo – the 2019 World of Outlaws NOS Energy Drink Sprint Car Series Rookie of the Year – find their way to Victory Lane.

How long have you been building engines?
As a company we began building engines in 1985. I started in the basement of my mom and dad’s house, so I was about 12 somewhere around 1982. I would help with whatever my dad was working on. Back then it was just a lot of small block Chevy and flat top 350 stuff.

What types of engines do you currently build?
The only thing that we do right now is 410ci and 360ci, Sprint Car motors.  We really kind of got ourselves to where we wanted to be as far as that’s all we build. I get calls all the time for midget motors and Late Model motors and honestly even in our Sprint Car motors at this point we’ve become really selective and typically only rebuild stuff that we’ve already worked on. 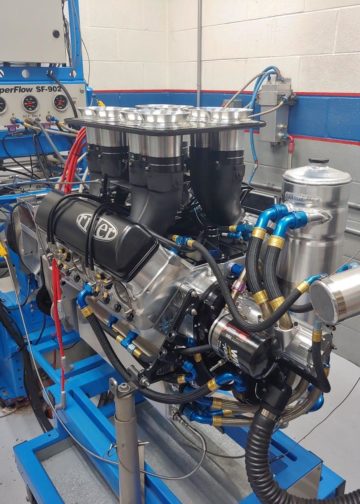 Who are some of the standout drivers you currently build engines for?
Kyle Larson and his team with Carson Macedo in the World of Outlaws, and Aaron Reutzel with the All Stars. Those are some of our best teams on the 410ci side. On the 360ci side Mark Smith, I think he’s won 13 races so far this year.

What is the biggest change you’ve seen over the last 20 years in these engines?
There’s obviously been a lot of changes. I feel like, as a whole, the engine itself has evolved. Honestly, you know, obviously the cylinder heads and the injection have all gotten much better. Probably mostly the valve train and top end stuff. Although there’s obviously been improvements even in some of the short block design whether it be pistons or reducing rotating weight. Everything has definitely evolved quite a bit.

Is that because the parts have improved enough that you can turn more RPM or is it that you can build them looser…?
It’s mostly the cylinder head and valvetrain stuff that’s helped the power the most. But still there is a lot of power just in different parts of the short block. I think what has helped us [as a company] the most is that that’s all we do and with the amount of motors that we do every year you just refine it so much that you can just kind of squeeze everything out of it.

Out of all the tools in your shop, which one do you find yourself using the most?
As a shop we essentially rebuild about a motor a day. And if we don’t do quite five a week, we probably average somewhere around four a week or something like that. So, you know, we use all of the tools a lot. The dyno runs pretty much every single day. I think we dyno about 200 motors a year.  I do all the cylinder heads, so I use the cylinder head equipment every day. I use the 30 to do valve seats almost every single day that I’m here.

Is there a win or a moment you’re proudest of as an engine builder?
No, I wouldn’t say anything really stands out that’s been the best moment of our career so far. I’m proud of all of our teams that win races. You can hop on our Twitter page and I do all the updates on it. So, I’m just proud to update that thing every week and try to keep track of all of our wins. And you know, honestly, it doesn’t matter if it’s Kyle winning five in a row, or like this weekend a guy that we do a wingless motor for won on his first night out. Really, I’m just proud of every team that we have.