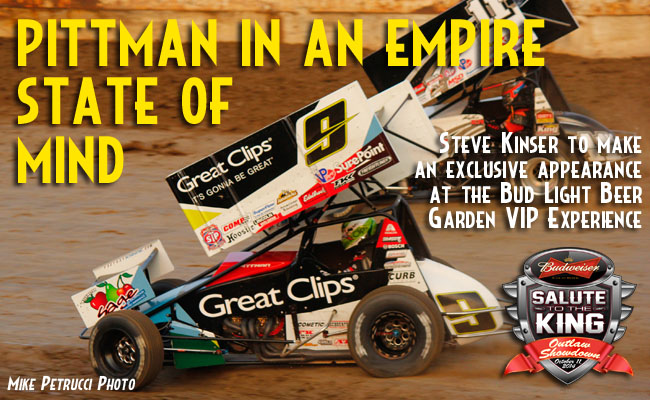 One driver looking to notch a win during the Outlaws’ return to Rolling Wheels is defending series champion Daryn Pittman. The Kasey Kahne Racing driver scored his first win at the track last season.

“I’ve always enjoyed going there,” Pittman said. “It’s a tricky place. It’s a fun place to go but challenging. Last year was the first time I ever won there… I always look forward to going back, especially this time of year. It’s a little cooler and the track stays a little heavier. It’s a fast, flat track where throttle control is really important.”

With the season winding down and Donny Schatz’s 288 point lead in the race for the championship, Pittman said he has been disappointed in some third and fourth places runs and close calls in recent weeks, but is focused on winning races.

“I was really disappointed at Bloomington because I felt like we ran really hard,” he said. “You’ve got to run 40 hard laps to win those races. We came close on the West Coast but had disappointments there – races that have kept us up at night. At the end of the day our focus is to win races. You win more money winning races and the points take care of themselves.”

Joining Pittman in the quest for a win at Rolling Wheels is 20-time World of Outlaws STP Sprint Car Series champion Steve Kinser, who is making his final appearance at “The Fast Track” as a touring driver with the series.

Fans who buy tickets for the Bud Light Beer Garden VIP Experience will be able to salute the King of the Outlaws in person as he makes an exclusive appearance. For $100 fans will get pit access, seating in the pit grandstands, FREE parking, an open bar, a buffet, closed circuit TV coverage and the opportunity to meet Steve Kinser, a 12-time Rolling Wheels winner.

In addition to the World of Outlaws STP Sprint Cars, the night will also feature the Win-and-You’re-In DIRTcar Big-Block Modified event, where the winner secures the final starting position in the NAPA Super DIRT Week $50,000-to-win Syracuse 200 on Sunday, Oct. 12, at the New York State Fairgrounds’ historic 1-mile oval in Syracuse.

Tickets for the event, as well as the Bud Light Beer Garden VIP Experience, can be purchased online by clicking www.WorldofOutlaws.com/tickets or by calling 877-395-8606.