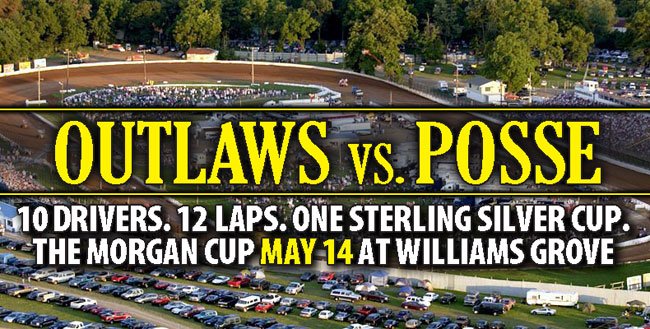 World of Outlaws to Take On Pennsylvania Posse for Morgan Cup

CONCORD, N.C. – April 9, 2011 – The World of Outlaws! The Pennsylvania Posse! They are Sprint Car racing’s elite and they don’t mix. The two sides comprise one of the most heated rivalries in our sport. On Saturday, May 14, in the heart of Posse Country at Williams Grove Speedway in Mechanicsburg, Pa., they’ll line up for a special 12-lap race, the inaugural Morgan Cup. There will be cash for whoever makes it to the checkered flag, but this race won’t be about money or points. This race is about bragging rights – for drivers and fans – and a sterling silver cup. (George Levy photo)

The Top Five World of Outlaws finishers and the Top Five Pennsylvania Posse finishers from last fall’s National Open are the contenders in the race, which will follow the May 14 A-main. The Posse will line up in one row, the Outlaws will line up in the other. The winner of the A-main will determine lane choice. An $11,000 purse is on the line and each driver will receive a right rear Goodyear tire. The sterling silver Morgan Cup trophy will be on display at the winning team’s headquarters for a year, until the next race the following season.

Starting the race for the Outlaws will be (in order) 2010 champion Jason Meyers, Jason Sides, Paul McMahan, four-time series champion Donny Schatz and Kraig Kinser. For the Posse, the lineup will include Lance Dewease, Stevie Smith, Brian Montieth, Daryn Pittman and Greg Hodnett. Craig Dollansky and Chad Layton are the alternates.

Let the debate begin: Will it be the Outlaws or the Posse?