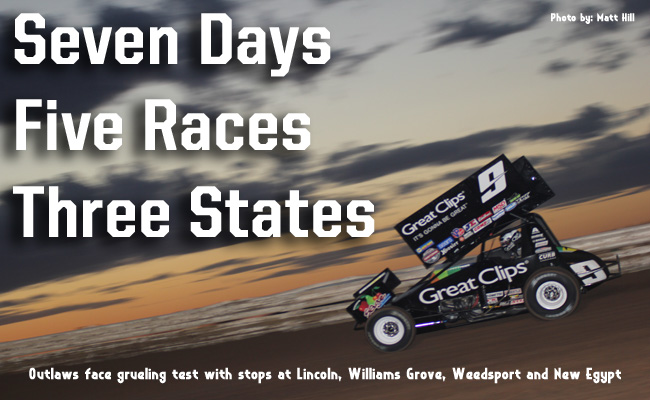 The World of Outlaws Craftsman® Sprint Car Series has reached the point of the schedule where teams are starting to settle in and get into a groove — setting themselves up for the endurance of the 90-plus races a year. However, it’s tests like five races in seven days in three different states that make the Outlaws “The Greatest Show on Dirt”.

The middle of May takes the Outlaws through their first stretch of mid-week races that includes five races in seven nights at four different tracks in three different states. The series makes its only stop at Lincoln (PA) Speedway on May 17 before the Spring Classic and Morgan Cup at Williams Grove Speedway in Mechanicsburg, PA on May 19 and 20.

Nonetheless, there’s no stopping as the Series digs deep and continues down the road to Weedsport (NY) Speedway on May 21 to complete three consecutive nights of racing before getting a night with its date with New Egypt Speedway.

“I’ve done it long enough that it’s just normal for me,” said Daryn Pittman, driver of the Kasey Kahne Racing No.9 and the most recent Outlaws winner at Williams Grove. “Other than making sure we’ve got everything packed up with the family to go in the motorhome, it doesn’t change us. I look forward to more races and a lot of times feel like I only get better the more I race.”

It’s also the Series’ first march into Pennsylvania Posse territory, a set of races that always bring an added test. The trip to historic Williams Grove in Central Pennsylvania is always one of the toughest challenges on the tour.

“At a regular Outlaw show, you’re never going to win if you’re off a little bit,” said Pittman. “That holds even truer at a race in Pennsylvania. There’s just no room for error because not only are you trying to beat all of your regulars, but there’s a handful of locals that can win if they’ve got their stuff together that night.”

The Outlaws trip to Williams Grove is also a homecoming for Kevin Gobrecht Rookie-of-the-Year contender Brent Marks, who calls nearby Myerstown, PA home.

“That’s where I grew up and got involved into racing,” said Marks. “I was a little kid sitting in the infield playing in the dirt with Sprint Cars. I’ve been around Williams Grove my entire life. That’s kind of where it all started for me, so when you go back there it’s a pretty surreal moment.”

“The history of the racetrack itself and the prestigious events that have been held there forever, as well as the rivalry between the Outlaws and the locals, is pretty much unmatched anywhere in the country,” said Pittman.

Williams Grove fans personify the rivalry between the World of Outlaws and the drivers of the Pennsylvania Posse. The rivalry is most evident at the Grove. Over the last five seasons, the two sides are tied with 11 wins apiece. However, the Posse held the edge last season with three victories to the Outlaws one, courtesy of Pittman.

“Pennsylvania fans are as well educated in Sprint Car racing as anywhere in the country and as diehard as they come,” said Pittman. “They live and breathe it. It’s just something that’s embedded into that part of the country. It’s a lot of fun, I think, to show up and be part of it.”

Following a pair of nights at Williams Grove, the series travels north to Weedsport, NY for the first of three races this season in the Empire State. Weedsport Speedway hosts the Empire State Challenge for the third straight season since the 3/8-mile oval underwent major renovations in 2014. Donny Schatz will look to make it three wins in a row at the Central New York track on May 21. Many drivers now look forward to visiting Weedsport and recognize the track as one of the premier dirt track racing facilities in the country.

“It’s not a cookie-cutter, normal racetrack. It’s tricky,” said Pittman. “It’s an odd shape with an odd surface. I enjoy those; they’re fun. I don’t know that we’ve seen the same conditions twice yet. We’ve only been a few times, but I definitely look forward to going and seeing what it’s going to throw at us this time and seeing how good we can be this time around.”

The Series wraps up their five-races-in-seven-days-in-three-states tour at New Egypt (NJ) Speedway on Tuesday, May 23. The semi-banked half-mile New Egypt, NJ track has hosted a World of Outlaws event nine times since 2000. One driver’s name has been tied to the top of the charts for the past four years: Daryn Pittman. A fifth consecutive win at New Egypt Speedway for Pittman could help get the ball rolling as the Series starts to head into the grueling month of June.

Tickets for the Gettysburg Clash at Lincoln Speedway and the Jersey Outlaw Classic can be purchased at WorldofOutlaws.com/tickets.

Advanced tickets for the Empire State Challenge at Weedsport Speedway are available online at www.weedsportspeedway.com.