Skip to content
Outlaws Return to Vegas in 2014
Tags: 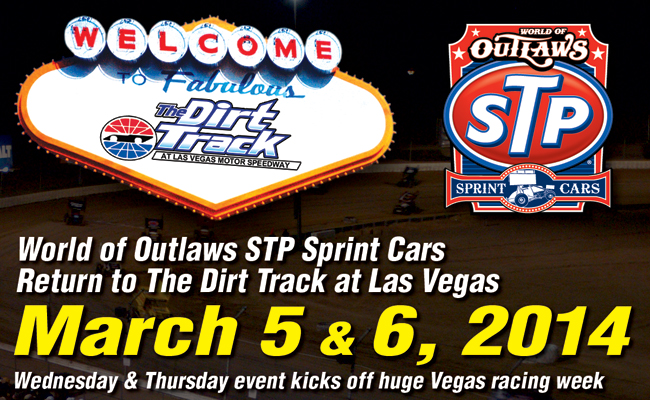 The special mid-week dates open the NASCAR week at the multi-track complex that has become a popular destination for race fans in early March. The World of Outlaws STP Sprint Cars will race in complete programs each night with support divisions including non-wing sprints, modifieds and late models making the perfect launch to a huge Vegas week.

Plus, for the first time, the event also coincides with CONEXPO (www.conexpoconagg.com), a massive international showcase for the construction industry with more than 130,000 people expected to attend.

The two full shows will mark the 17th year the 900-horsepower World of Outlaws STP Sprint Cars have raced at the Las Vegas half-mile dirt oval, with five-time Outlaw champion Donny Schatz posting his seventh victory earlier this season to lead the all-time Outlaw win list at the track.

For the first time, reserved seats are available for this two-day event and will go on sale at 9 a.m. EDT on Monday, Aug. 26, 2013, by clicking WorldofOutlaws.com/tickets or calling 877-395-8606. Money-saving, two-day reserved ticket packages will be available and will include a free fan pit pass if purchased in advance

The Dirt Track at Las Vegas Motor Speedway is just minutes from the world famous Vegas Strip, with world-class casinos, hotels and shopping. The two-day event will be the World of Outlaws STP Sprint Car Series only visit to Vegas in 2014.

No doubt, the week could be one of the biggest in Vegas history so fans shouldn’t delay making plans to see “The Greatest Show on Dirt” in one of its most unique settings.