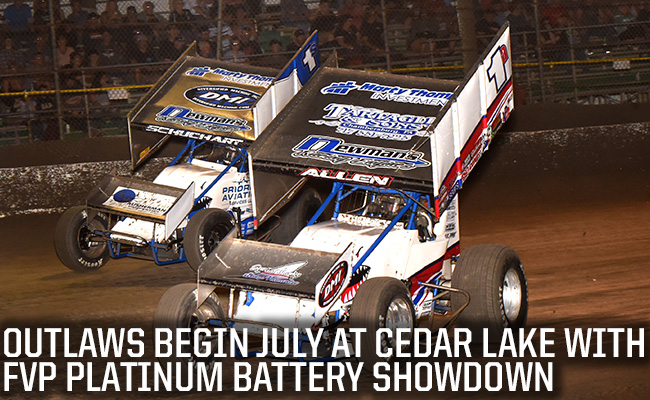 CONCORD, NC – June 16, 2018 – The World of Outlaws Craftsman Sprint Car Series continues its 40th Anniversary Season in the Badger State on Friday, July 6 and Saturday, July 7 with the running of the FVP Platinum Battery Showdown at the high-banked, high-excitement Cedar Lake Speedway in New Richmond, Wisconsin.

Cedar Lake holds a special place for Shark Racing. In 2016, Logan Schuchart and Shark Racing team scored their first career Outlaw victory at the 3/8-mile Wisconsin oval. “Cedar Lake will always hold a special place in this team’s heart,” Schuchart said. “We knew our team could compete at the highest level, but to actually get it done for the first time was an unforgettable feeling,” the Hanover, PA native added.

Two years later, Schuchart is a feared force on the World of Outlaws tour and owns six career Outlaw victories, after scoring four during the 2017 season. Now all eyes have shifted to Schuchart’s teammate, Jacob Allen. Allen joined the World of Outlaws tour alongside Schuchart back in 2014 with less than a handful of 410 starts under his belt. Allen started in the back every night, got some valuable seat time at new race tracks, and stayed out of the way as he quietly improved.

Now in his fifth full season on the road and in a 410 Sprint Car, Allen has caught the Sprint Car world’s attention. Allen, the younger of the Shark Racing duo, scored a pair of runner-up finishes in the span of a week at Fairbury American Legion Speedway and Jackson Motorplex to begin the summer months.

In addition, Allen — the son of legendary driver Bobby Allen — has multiple Quick Time awards and Heat Race victories to his name in 2018. “These last few weeks have been a lot of fun. I’m trying hard for that first Outlaw win, but these guys are the best in the world. We have a good baseline at Cedar Lake, and Logan got his first win there. We’re really looking forward to getting back there,” Allen said in anticipation of the FVP Platinum Battery Showdown double-header at Cedar Lake.

As always in the Midwest, a strong contingent of regional drivers will be on hand to steal a victory, or two, from the Outlaws. Last year, it was a clean sweep for Australian Kerry Madsen, as the ‘Mad Man’ landed in Victory Lane both times during the FVP Platinum Battery Showdown weekend. Madsen’s pair of Cedar Lake triumphs were two of his five Outlaw wins in 2017.

Tickets for the FVP Platinum Battery Showdown at Cedar Lake can be purchased here. If you can’t make it to the track, watch every lap of the World of Outlaws Craftsman Sprint Car Series 40th Anniversary Season live on DIRTVision.com!