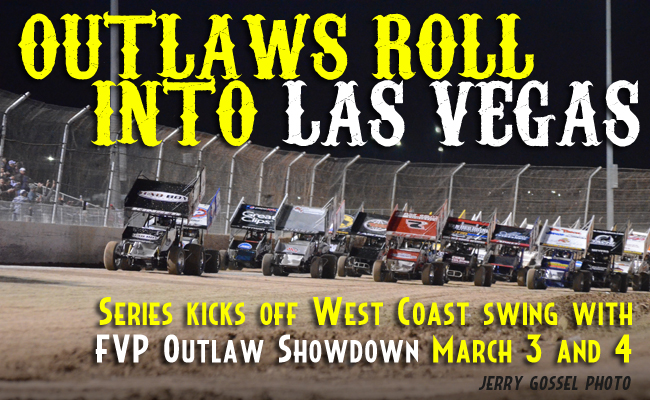 FVP, a premier producer of high quality original equipment auto products, has a longstanding relationship with the Outlaws, and has become a key part of bringing the The Greatest Show on Dirt to the fans in Las Vegas during the entertainment capital’s biggest week of racing each year.

FVP is also the title sponsor for the two-day destination event at the Stockton (Calif.) Dirt Track on March 21 and 22.

Last year’s Outlaw Showdown in Las Vegas saw two nights of thrilling battles. Paul McMahan went toe-to-toe with ‘The King’ of the Outlaws, Steve Kinser, on night one and came out on top scoring his first win of the season. On night two, eventual 2014 series champion Donny Schatz was also forced to fend off Kinser as he took home his second win of the season.

Joining the World of Outlaws Sprint Car Series for two days of racing action at The Dirt Track at Las Vegas Motor Speedway are the USAC West Coast Sprint Series, IMCA Modifieds and West Coast Late Models. The modifieds and late models take on the half-mile oval with the Outlaws on Wednesday. All three series are joined by the USAC sprints on Thursday.

Tickets for the FVP Outlaw Showdown at The Dirt Track at Las Vegas on March 4 and 5 are $40 for reserved seats and $39 for general admission. All two-day ticket packages will receive a free fan pit pass. Visit www.WorldofOutlaws.com/Tickets or call 1-877-395-8606 to order your tickets today.