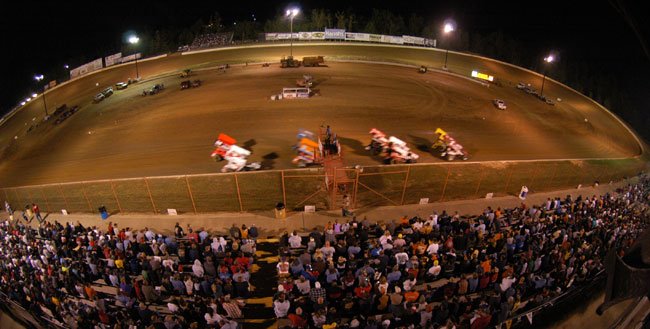 Following a wet March in California, the World of Outlaws are set to debut in the Midwest, where it has been unseasonably warm and dry compared to the damp West Coast. The Outlaws kick off a four-week schedule throughout the Midwest on Friday, April 13, at Paducah International Raceway.

“The weather has been beautiful back in the Midwest,” said Joey Saldana, who set the track record of 12.825 seconds in 2009. “It’s usually the other way around – California is beautiful and it’s bad in the Midwest. Where I live in Indiana it’s been great weather.”

The event at Paducah International Raceway is the only race in Kentucky this season and the first since 2010. Last year’s event was flooded out at the high-banked, 3/8-mile oval, which has featured tricky conditions in the six previous World of Outlaws main events.

“It’s a very unique place,” four-time Outlaws champion Donny Schatz said. “It’s going to be great to get back in the Midwest and get on some high-banked tracks.

“It’s a challenge. I haven’t been very good there in the past, so hopefully we can get there and get ourselves a win.”

The track opened in 1972 and a trio of NASCAR stars have been involved in ownership in the past decade. Dale Earnhardt Jr. and Kenny Schrader have co-owned the track since 2005, and Tony Stewart has been involved since 2006.

There has been a different winner in each of the six World of Outlaws events held at Paducah International Raceway since 1998. Jeff Swindell won the inaugural race with Andy Hillenburg claiming a 2001 victory.