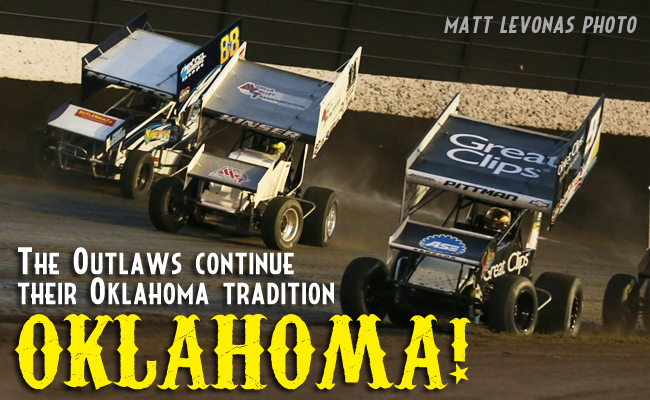 SALINA, Okla. — April 9, 2015 — The World of Outlaws Sprint Car Series was born in 1978. That same year, the series raced for the first time in the state of Oklahoma. The best sprint car drivers in the world have returned to the “Sooner State” in 32 different seasons since, and the list of winners with the World of Outlaws in Oklahoma over that span is a venerable “Who’s Who” of the sport, including Hall of Famers Steve Kinser, Sammy Swindell, Doug Wolfgang, Jac Haudenschild, Brad Doty, Ron Shuman and Dave Blaney. In total, 22 drivers have earned A-Feature wins with the series in Oklahoma.

The series has visited six different tracks in Oklahoma over the years, varying from sprawling half-miles to a tight quarter-mile bullring and a few in between. One of those is the high-banked three-eighths-mile Salina Highbanks Speedway, which will host the World of Outlaws on Friday, May 1 and marks the series only visit of the season to Oklahoma.

Tickets for the event at Salina Highbanks Speedway are available online at http://slspromotions.ticketforce.com/salina2015 or by calling SLS Promotions at 815-344-2023 and can also be purchased at participating local O’Reilly Auto Parts stores, which offer a $5 OFF Special on General Admission tickets.

Joey Saldana, who has been racing with the World of Outlaws since the mid-1990s, was victorious last season at Salina Highbanks Speedway, which marked his first win with the series in Oklahoma. Craig Dollansky, who returned to the series full-time this season, was victorious in the inaugural World of Outlaws event at Salina in 2011 and repeated in 2013.

Leading the way to Salina is six-time and defending series champion Donny Schatz, who also is the current point leader. The North Dakota native, who drives for Tony Stewart Racing, has one-career World of Outlaws A-Feature win in Oklahoma, with that coming in 2003. Schatz leads the series with three wins already in 2015 through the first 13 races.

A pair of Oklahomans, Shane Stewart and Daryn Pittman, are both looking for their first home state win with the series. Stewart, who was born and raised in Bixby and drives for Larson Marks Racing, a team co-owned by rising NASCAR star Kyle Larson, has visited victory lane once already this season and is second in points. Pittman, who hails from Owasso, is the 2013 series champion and has won twice thus far in 2015 and is currently seventh in points.

Tickets for the World of Outlaws Sprint Car Series event at Salina Highbanks Speedway on Friday, May 1 can be purchased online at: http://slspromotions.ticketforce.com/salina2015 or by calling SLS Promotions at 815-344-2023.