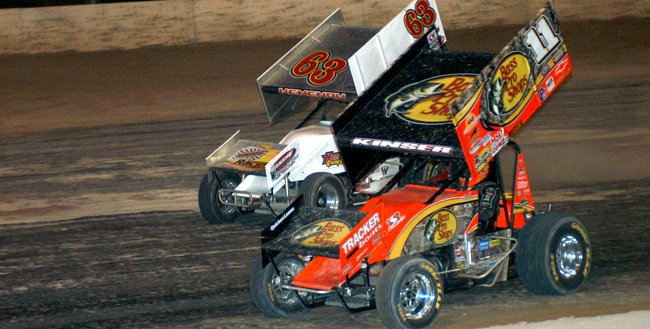 The World of Outlaws return to Las Vegas on Wednesday and Thursday, March 6-7

LAS VEGAS — Oct. 30, 2012 — Whether slots, blackjack or sprint cars is an interest, the trio will be combined next March when the World of Outlaws STP Series returns to Las Vegas for the Outlaws in Vegas, Baby!

The Dirt Track at Las Vegas Motor Speedway will host a doubleheader on Wednesday and Thursday, March 6-7, marking the fifth consecutive season and 16th year since 1996 that a World of Outlaws event will be contested on the half mile.

The event will lead into the NASCAR weekend at the famed facility, which has featured a different winner in the last five races. Donny Schatz, who is on pace to record his fifth World of Outlaws championship this season, has recorded a series-leading six victories at The Dirt Track at Las Vegas Motor Speedway.

Tim Kaeding claimed a thriller in the only race this season with Jason Sides charging from 10th to second and Steve Kinser from 14th to third. Chad Kemenah placed fourth and Brian Brown rallied from 21st to round out the top five.

Special pricing is available for tickets and a free fan pit pass will be awarded for two-day tickets purchased in advance. Tickets can be ordered online by clicking WorldofOutlaws.com/tickets or by calling 877-395-8606.