Outlaws Back at Fulton 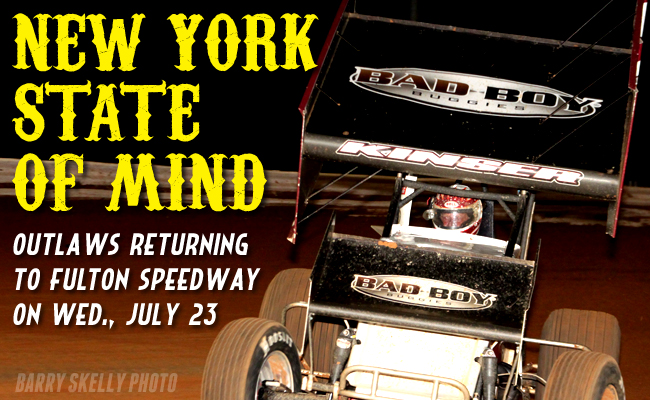 to New York’s Fulton Speedway for First Time Since 2010

CONCORD, N.C. – Jan. 16, 2014 –The World of Outlaws STP Sprint Car Series is returning to Fulton (N.Y.) Speedway on Wednesday, July 23, 2014. The event will mark the fourth time the Outlaws have invaded the 3/8-mile high-banked oval in upstate New York.

Steve Kinser, the 20-time series champion who will be making his final run at a World of Outlaws STP Sprint Car Series crown in 2014 during the “Salute to the King,” is the series’ most recent winner at Fulton, taking the checkered flag on Aug. 3, 2010. Donny Schatz (2006) and Brooke Tatnell (2005) have also earned victories at Fulton.

“We are honored and excited to be a host track during the “Salute to the King” season,” Fulton Speedway owner John Wight said. “He won the last one here in 2010 and it would only be fitting for it to happen again on July 23. The King deserves a royal sendoff and we will do our best to make sure the fans see something special.”

Tickets for this event are on sale now at www.WorldofOutlaws.com/tickets or by calling the ticket hotline at 877-395-8606. In addition to the World of Outlaws STP Sprint Cars, there also will be a $1,000-to-win Industrial Tire of CNY Shootout Series event for the SUNY Canton Sportsman division.

The World of Outlaws STP Sprint Car Series visits Fulton as part of a late-July swing during the Month of Money that takes the tour from Ohio through Canada beginning July 11-12 with the Kings Royal weekend at Eldora Speedway and continuing into Pennsylvania July 15 at Lernerville Speedway for the Don Martin Memorial Silver Cup, a second stop on July 17 at Lincoln Speedway in Abbottstown, Pa., the July 18-19 Williams Grove Speedway Summer Nationals, the annual event on July 20 at Lebanon Valley Speedway in West Lebanon, N.Y., the return to Fulton on July 23 and then into Canada on July 26 at Autodrome Drummond near Montreal and July 29 at Ohsweken Speedway in Ontario.

The World of Outlaws STP Sprint Car Series kicks off the 2014 season on Feb. 14 at Volusia Speedway Park during the DIRTcar Nationals presented by Summit Racing Equipment.

For tickets and information about Fulton Speedway, click www.FultonSpeedway.com. For more on the World of Outlaws, go to www.WorldofOutlaws.com.